$3 gas is becoming a distant memory: Gas prices likely to stay steady in 2020

For many American motorists, $3-a-gallon gasoline is becoming a distant memory.

Americans are likely to pay an average of $2.60 a gallon in 2020, according to fuel savings app GasBuddy's annual forecast.

On the whole, drivers haven't paid more than $3 nationwide since 2014, when prices averaged $3.36, according to the U.S. Energy Information Administration. (Prices along the West Coast and in Hawaii have skewed higher.)

"It's another good year for Americans to pump," said Patrick DeHaan, head of petroleum analysis for GasBuddy. "I would not expect the national average this year to hit $3."

Why has the average cost of gas been below $3 for so long? The main reason is the nation's oil boom, coupled with increases in output in other countries. 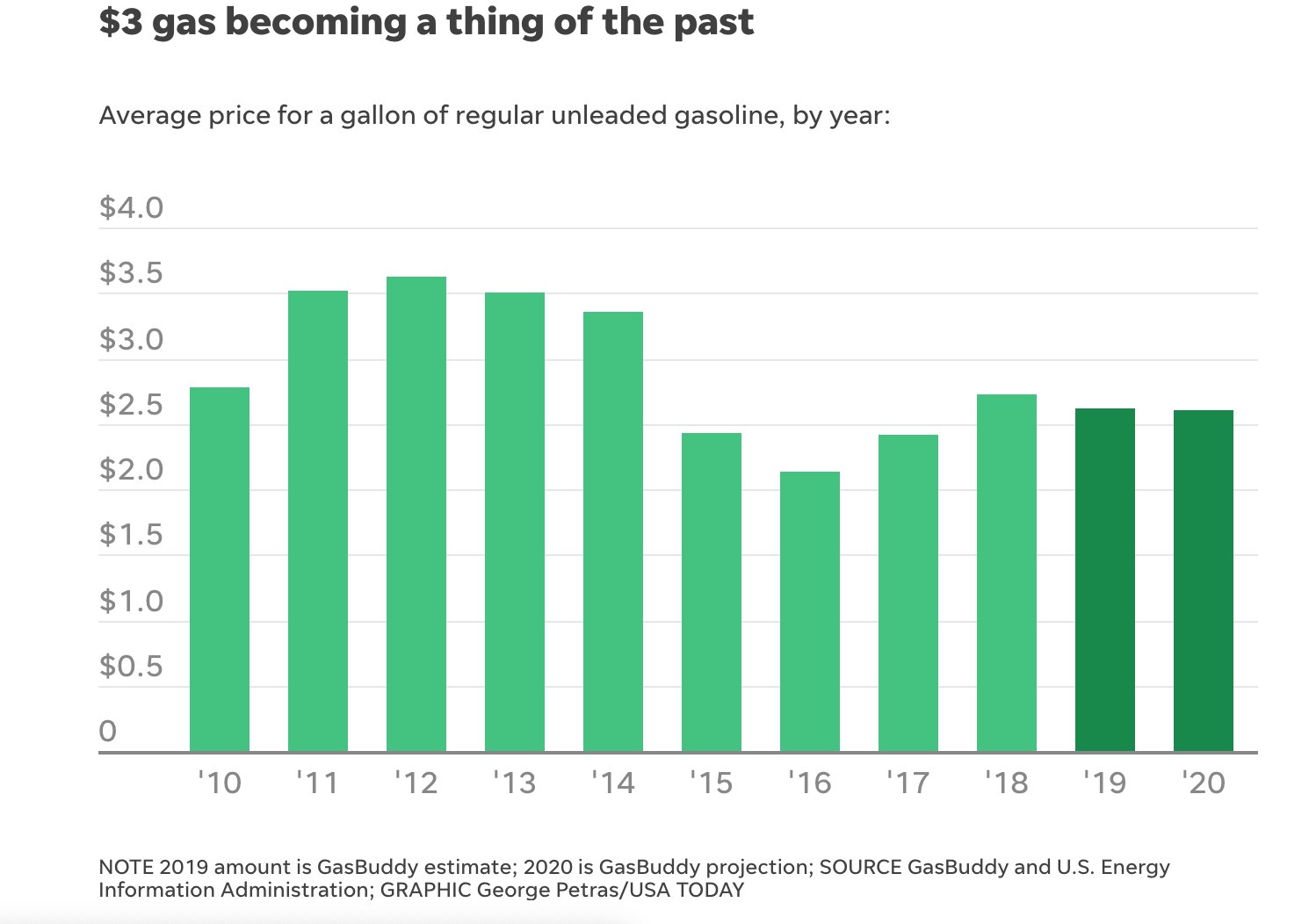 The United States produces so much oil that it exported more than it imported in September, the first month that has happened in recorded history.

Total vehicle miles traveled reached an all-time high in October, the latest period in which statistics were available, according to the U.S. Federal Highway Administration. The 12-month moving average was 3.25 trillion miles in October, up 7.9% since the same point in 2014.

The lack of volatility in gas prices has played a significant role in America's SUV boom. SUVs represent about half of new vehicle sales, according to car buying research site Edmunds, while passenger cars make up about 3 in 10.

As recently as 2013, it was the reverse. At that point, cars still made up nearly half of new vehicle sales, according to Ward's Automotive. But automakers such as General Motors, Ford Motor and Fiat Chrysler discontinued most of their passenger cars while betting big on SUVs.

Despite the projected low gas prices, don't expect 2020 to pass without a few sharp swings. GasBuddy projected that prices would hit a low point of $2.41 in February, then rise to a peak of $2.84 in May. Prices typically rise in the lead-up to the summer travel season before falling through the end of the year.

Although $3 gas is unlikely for the entire country this year, several major cities are projected to hit that threshold, including Chicago, New York, Phoenix, Miami, Boston, Detroit and Seattle.

Three California cities are expected to top $4, according to GasBuddy: Los Angeles, Sacramento and San Francisco. California typically has the highest prices among the 48 contiguous states.