On Tuesday, the International Energy Agency (IEA) released a report detailing its “net-zero pathway”. The report covered hundreds of different steps the world could begin to take today to reach net-zero emissions by 2050.

Most notably, the report outlined an extreme scenario for global oil and gas producers, which included no new investment in fossil-fuel supply projects. As anti-fossil fuel voices have continued to highlight the recommendation, they’ve failed to take a closer look at the report, which in its entirety emphasizes the ongoing role oil and gas have to play in the global population’s everyday lives – even under the IEA’s net-zero pathway.

Texans for Natural Gas details five key facts about Texas oil and gas to keep in mind when reading the report:

In their report, the IEA reimagines its role in the world economy. Even in the IEA’s scenario to reach net-zero by 2050, fossil fuels will remain a critical part of the energy mix, making up about one-fifth of the global energy supply. The fundamental shift in the energy mix will not be the decline in oil and natural gas, but the steep increase in renewable energy. 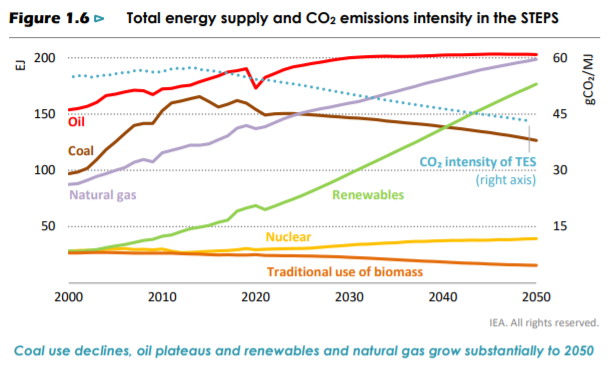 The IEA reports that in its net-zero scenario, fossil fuels will also continue to be used in essential goods, like the creation of plastics, in facilities fitted with carbon capture technology.

2. In the IEA’s pathway to net-zero, methane emissions from fossil fuel supply will fall by 75% over the next ten years.

Oil and gas producers are already well underway to meeting this ambitious goal, continually investing, adapting and innovating to address methane emissions across operations. Their efforts are already showing returns. According to the World Bank’s most recent Global Gas Flaring Tracker Report, flaring in the United States fell by 32 percent from 2019 to 2020. In one of the world’s most prolific producing basins – the Permian - methane emissions intensity fell 77 percent between 2011 and 2019.

3. The IEA names direct air capture and storage as one of the “biggest innovation opportunities” to reach net-zero by 2050.

Oil and gas producers – particularly Texas energy producers – are some of the world’s leading investors in carbon capture and storage (CCS) technology. ExxonMobil alone has invested $3 billion in low-carbon efforts focusing on carbon capture and storage. Operators continue to undertake ambitious CCS projects -  for example, in March, Houston-based LNG developer NextDecade announced the formation of its subsidiary NEXT Carbon Solutions, a CCS project tied to its Rio Grande LNG facility that aims to reduce the LNG terminal’s emissions by more than 90 percent.

4. The report notes the importance of ending global energy poverty by 2030.

The IEA writes that “providing electricity to around 785 million people that have no access and clean cooking solutions to 2.6 billion people that lack those options is an integral part of our pathway.” Natural gas will play a critical role in delivering needed cooking fuels and electricity to the hundreds of millions that currently suffer without them.

World leaders from countries that struggle with energy poverty – like India – have stated how natural gas will play a key role in their countries’ energy futures. During CERAWeek this year, Indian Prime Minister Modi shared his goal of growing the share of natural gas in its fuel mix from 3 percent to 15 percent by 2030. Increased access to natural gas, which is clean-burning, reliable, and has significantly less carbon emissions than coal, could drastically improve the lives of those using other, more dangerous fuels in their everyday lives because they have no other option.

“Compared with the energy sources that many African countries are relying on today and may increasingly turn to tomorrow as their populations expand, a combination of natural gas and renewables is necessary for a brighter, greener future.”

For many countries, transitioning from coal to natural gas would result in a dramatic reduction in carbon emissions. American LNG exports provide an abundant supply of energy that can be easily transported all over the world. For example, China has become one of the world's largest LNG importers as it aims to switch millions of homes and manufacturing facilities from coal to natural gas. Thanks in large part to natural gas, China - often named the world’s biggest emitter of greenhouse gases - has made significant progress in lowering carbon intensity. In the past five years, China reported it has cut carbon intensity by 18.8%.