Flaring is a temporary and necessary practice in oil and natural gas production that is used as a safety measure and to mitigate more harmful emissions. In Texas, flaring is regulated by the U.S. Environmental Protection Agency (EPA), the Texas Commission on Environmental Quality (TCEQ) and the Railroad Commission of Texas (RRC).

Oil and natural gas companies continue to discover, research and implement new processes to reduce the need to flare. The results of these efforts are clear: U.S. oil and natural gas production has reached historic highs, ​yet the United States ranks far below most major oil and gas producing countries for flaring intensity.

Several recent media reports have called attention to flaring as a “wasteful” practice. But it’s important to stress that anti-fossil fuel activists have been caught misleading the public about methane emissions and flaring. For example, many activists portray flaring as a danger to those nearby. In fact, flaring is often a safety mechanism, allowing operators to release excess pressure, which reduces the risk of fires or other incidents.

The best way to reduce flaring is through the addition of new infrastructure, particularly pipelines. Companies have an economic incentive not to flare, as natural gas is a valuable product. Unfortunately, many of the same critics who attack the industry over flaring have also stood in the way as energy companies tried to build new pipeline infrastructure, which would otherwise allow clean-burning natural gas to reach end-users.

The United States has become a world leader in energy, and that’s no accident. Thanks to fracking, the country has seen record oil and natural gas production and a sharp decline in our reliance on imports of foreign oil. While we have become the world’s largest oil and gas producer, companies have also focused on reducing the methane intensity of their operations. Nationally, methane emissions from U.S. energy production have declined 17 percent between 1990-2019, while oil and natural gas production has grown 66 and 96 percent, respectively.

In the Permian Basin, methane emissions intensity fell 77 percent, while oil production increased by over 300 percent between 2011 and 2019. 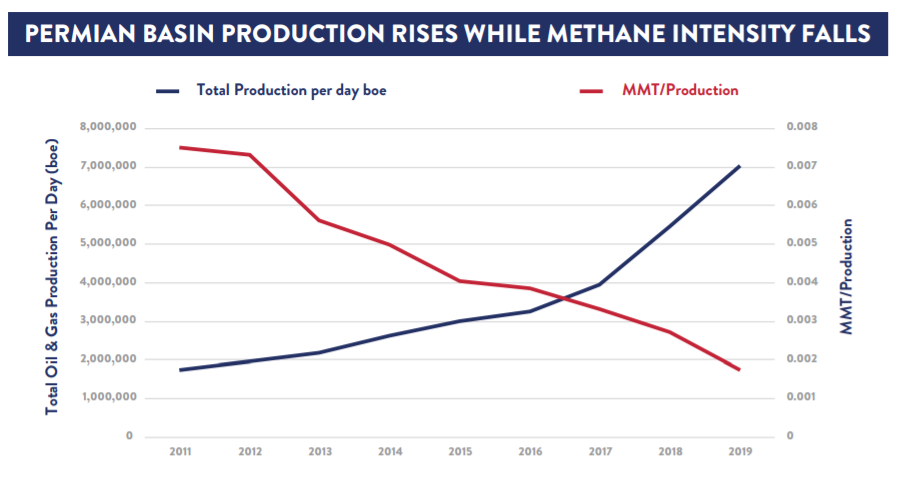 One of the clearest solutions to reducing flaring and methane emissions is to build out energy infrastructure – specifically pipelines. Growing pipeline capacity both in Texas and across the United States will alleviate the bottleneck issues that many energy producers face, providing a market for gas that would otherwise be vented or flared.

Have more questions? You can download our FAQ on flaring & methane emissions here.

More on Flaring & Methane Emissions From the Blog: