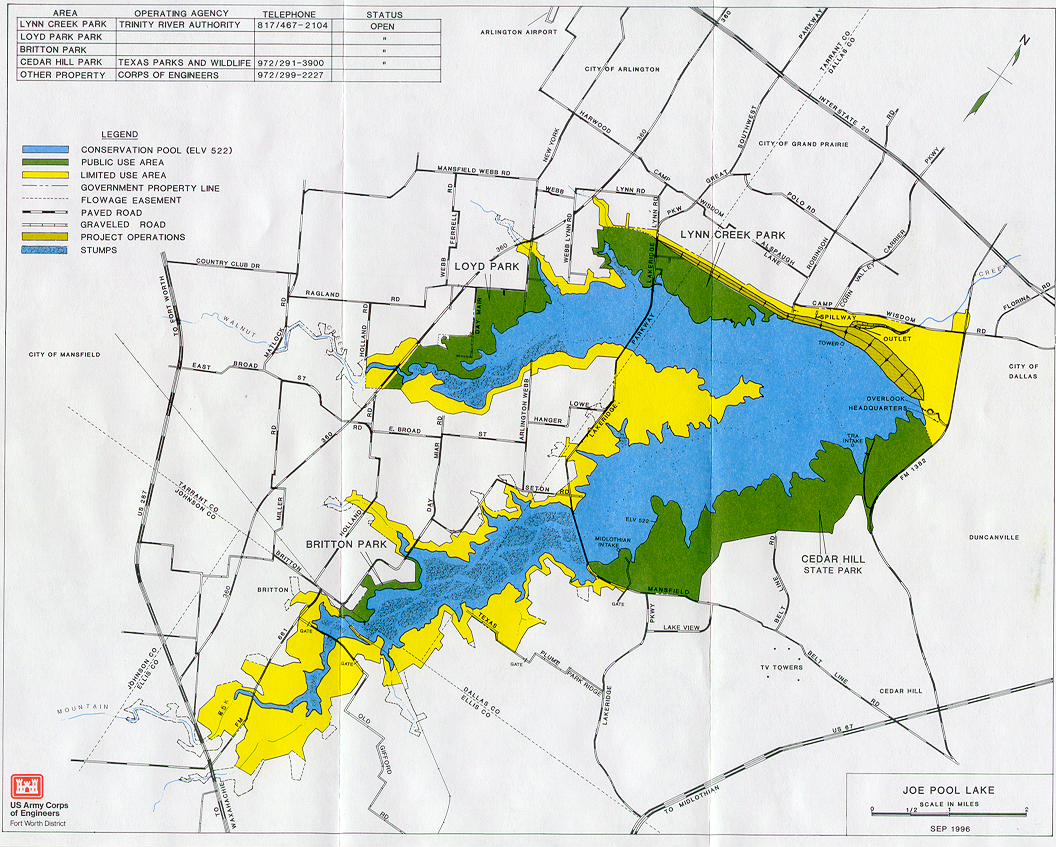 Last week, the U.S. Army Corps of Engineers (USACE) released a report  on the safety implications of drilling, hydraulic fracturing and production near the Joe Pool Dam. It appears the USACE ignored their own study and instead recommended that oil and natural gas development should be moved farther away from the dam at Joe Pool Lake. The current USACE recommendation is a buffer zone of 3,000 feet from all dam features, but the USACE argues the exclusion zone should extend another 1,000 feet, to 4,000 feet from the dam.

As USACE noted in its press release:

“The Railroad Commission’s highest priority is protection of public safety and our natural resources… The U.S. Army Corps of Engineers (USACE) has not contacted the Commission regarding its recent study of safety issues related to Joe Pool Dam. Railroad Commission staff are currently reaching out to USACE to discuss the findings of the study and determine what, if any further action might be warranted.”

By not working with the Texas RRC or TCEQ, the USACE’s legal options are limited, as the Corps does not regulate oil and natural gas activity in Texas, while Texas RRC has effectively regulated for almost 100 years.

The Railroad Commission also sent a letter to the Corps, asking “how USACE made these decisions and how it intends to implement its actions,” considering that the Corps’ announcement was made “without a formal rulemaking process.” The Texas RRC also asked who conducted the peer-review of the Corps’ study, what sort of public notice and comment opportunities were provided prior to the announcement of new drilling restrictions, and what the Corps believes will be the impact on existing wells inside the new buffer zone.

Don Postell, the city attorney for Grand Prairie, was more blunt in his remarks when speaking to the City Council during a March 22 work session:

“Even though you may wish to control drilling under the dam in cooperation with what the corps recommended, you really don’t have any authority to do anything with existing sites — even one that goes under the dam itself…” (emphasis added)

Another issue with USACE’s recommendation to expand the exclusion zone around the lake is that, in its own study,  there is no mention of the need for expansion. In fact, the report explicitly recommends keeping the 3,000-ft buffer:

“As mentioned already, an exclusion zone of 3,000 ft is recommended with regard to blowouts.”

“A 3,000 ft exclusion zone seems reasonable for protecting the dam from surface events such as spills and explosions, although if surface spills are considered, surface locations for wells should have a considerable stand-off from the lakeshore as well to protect the water.” (p. 10-11)

In addition to concluding the current exclusion zone is sufficient, several portions of the USACE study mention the minimal risk posed by hydraulic fracturing activities. In particular, opponents of natural gas development in the area cite seismicity related to fracking as a main concern. But as the study concludes, seismic events relating to fracking have not occurred in North Texas. According to the study,

“There is no documented case of gas extraction related earthquakes in the Barnett shale.” (p. 10)

“The risk of hydraulic fractures propagating from the depths of the Barnett shale to the depth of an aquifer is minimal. As such, restricting operations with regard to rate or pressures doesn’t seem to be warranted. Also, microseismic data collected for thousands of hydraulic fracture treatments does not show a strong correlation between the magnitude of the microseismic events and the rate or volume pumped.” (p. 10)

The USACE report also notes that fracking has not contaminated groundwater in the Barnett Shale, and that any risk of development is actually quite small.

Grand Prairie city staff has recommended to the City Council to pass along the study to the Texas Railroad Commission for review and allow the city’s current 3,000-foot buffer to expire on October 1.