Earlier this year, President Joe Biden and Energy Secretary Granholm committed to increasing U.S. exports of natural gas to Europe to help address the European energy crisis. However, despite the United States being the world’s largest producer of natural gas, two of its top producing basins, Appalachian and the Permian Basin, have faced growth-hampering challenges in recent years.

The primary challenge these basins face? A lack of adequate pipeline infrastructure to move natural gas to market and meet increasing demand.

The Permian Basin has worked to expand pipeline infrastructure in recent years, especially as pipelines are the simplest and most efficient solution to combat flaring and methane emissions in Texas. However, with the current and rapidly increasing demand for natural gas worldwide, Texas’ prolific Permian Basin would still need additional energy infrastructure to avoid facing insufficient takeaway capacity in the months and years to come.

The Energy Information Administration recently announced five new pipeline projects that promise to increase takeaway capacity out of the Permian Basin by a combined 4.18 billion cubic feet per day (Bcf/d) over the next two years. This includes the Matterhorn Express Pipeline, an approximately 580 mile-long line that will transport natural gas from the Permian Basin in West Texas to Katy outside of Houston, Texas. 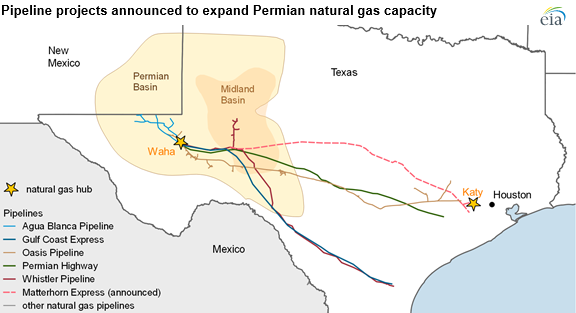 Once completed, the Matterhorn Express will transport up to 2.5 billion cubic feet of natural gas per day from the Permian Basin to the greater Houston area. That’s enough gas to supply heat to at least 2 million homes every day. The Matterhorn Express Pipeline will also bring vast economic benefits to the state of Texas, with an estimated 3,500 skilled jobs created during the construction of the pipeline and at least 50 permanent jobs once the pipeline is completed and operational. The project will contribute an estimated $75 million in taxes to state and local governments and benefit local communities by bringing increased patronage to local hotels, restaurants and businesses, and is expected to be in service in the second half of 2024, pending regulatory approvals.

Increasing energy demands in not only Texas, but across the world, signal that the Permian Basin will continue to be a critical player on the energy markets for decades to come. Continued investment in natural gas infrastructure, like the Matterhorn Express Pipeline, is essential to meeting global energy needs and pipelines. New infrastructure projects are not only necessary for our state, but benefit communities beyond Texas’ borders ensuring energy security and reliability for decades to come.