The Environmental Partnership’s third annual report highlights the oil and natural gas industry’s commitment to reduce flaring and emissions across the nation’s production and transmission segments. Efforts by member companies as part of the Partnership’s new flaring management program resulted in a 50 percent reduction in flaring intensity in 2020.

The new flaring management program complements the Partnership’s existing efforts to reduce flaring, including a leak detection and repair program and its focus on high-bleed pneumatic controllers which are a significant source of methane emissions within the industry. 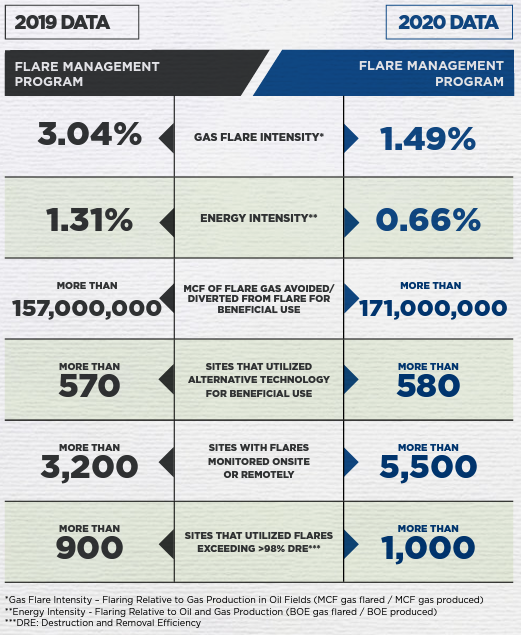 While it was not possible to hold in-person workshops due to the COVID-19 crisis, the Environmental Partnership pushed forward with its educational and collaborative programs including continuing its collaboration with Colorado State University’s Methane Emissions Test and Evaluation Center. As part of the program, participating companies have provided site access to conduct rigorous field testing of new emissions detection technologies. The partnership also continued to collaborate with the University of Arizona and NASA’s Jet Propulsion Laboratory to identify leaks through aerial surveys and launch a new pilot project using a novel detection technology in the Permian and Denver-Julesberg basin.

Since the partnership’s founding in 2017, it has expanded from 23 oil and natural companies to 94 small and large operators in every major U.S. oil and gas basin, with Houston-based TRP Energy joining in 2020. The initiative has leveraged best practices to conduct programs in 41 out of 50 states to help reduce methane emissions rates relative to production by nearly 70 percent in the largest U.S. basins, despite an increase in production, over the last decade.