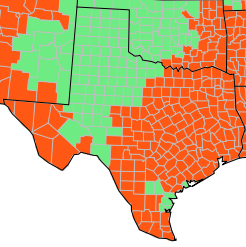 A statewide map from the study indicates that natural gas or wind generate the cheapest electricity among all 254 counties in Texas. In addition to being the country’s largest natural gas producer, Texas is also the largest producer of wind, much of it located in the Panhandle or western counties.

Importantly, the low cost of natural gas – specifically natural gas combined cycle (NGCC) power plants – factors in what are known as externalities, such as pollution or other “social costs” of development and use. Even with those extra costs built in, natural gas is competitive with – or even less expensive than – renewable technologies like wind and solar.

Although the research did incorporate externalities, it did not factor in the societal cost of subsidies or other government support for certain energy technologies. It’s unclear if tax credits for renewable generation, for example, impacted the levelized cost estimates included in the UT-Austin report.

Still, the report is good news for a Texas economy that is growing rapidly and will see an increase in power demand in the coming years. For each of the past five years, natural gas has accounted for more than 40 percent of all power generated for the Electric Reliability Council of Texas (ERCOT), which manages the electric grid for more than 24 million Texans.