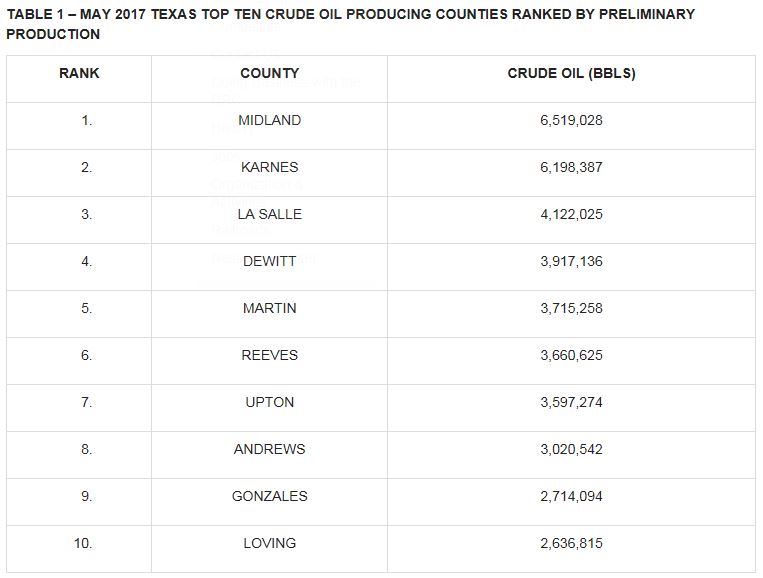 According to RRC data, the agency issued 482 permits in the Midland district - located at the heart of the Permian – in July of this year alone. To put that number into perspective, the RRC issued only 631 permits total in July 2016. Combined, the West Texas regions as broken out by the RRC (West Central, San Angelo area, Midland and Lubbock area) accounted for nearly 65 percent of the total permits issued.

This frenzy of activity focused on the Permian is for good reason, as it produced an estimated 23 million barrels of oil in May of this year. By far the largest producing region in the country, average crude production per day in the Permian is nearly twice that of the Eagle Ford, the nation’s next largest producing region. In fact, the Permian averaged nearly 2.5 million barrels of oil per day (MMbbl/d) in July, more than the Bakken, Haynesville, Marcellus, Utica, and Niobrara shale plays combined.

Compared to last year, oil production in the top producing counties of the Permian and Eagle Ford has increased. According to RRC, the top two counties in terms of oil production in May 2016 were Karnes County and Midland County, at 5.46 and 5.14 million barrels respectively. In just one year, production from these two counties increased by an astounding 26 percent in Midland County and 13 percent in Karnes County. As a whole, both regions are experiencing growth in oil production, increasing from an average of just over 1.0 MMbbl in the Eagle Ford and about 1.97 MMbbl in the Permian in August 2016, to nearly 1.38 MMbbl and over 2.5 MMbbl, respectively.

Just like oil production, natural gas production in both of these regions also increased. According to the U.S. Energy Information Administration, the Eagle Ford is estimated to produce an average of 6.25 million cubic feet of natural gas per day (Mcf/d) in August 2017, while the Permian is projected to produce an average of 8.5 Mcf/d this month. This is up from 5.8 Mcf/d in August of last year for the Eagle Ford, and 6.86 Mcf/d for the Permian – increases of nearly 8 percent and 24 percent, respectively.

Overall, the strong production levels from the Permian and Eagle Ford, coupled with the increase in oil and gas permits issued, shows the continued strength of Texas energy production.