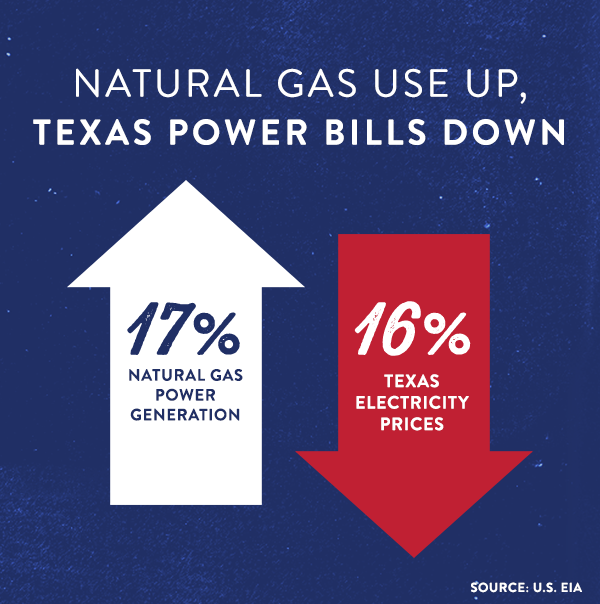 Since 2008, power generation from natural gas in Texas has increased by 17 percent, from more than 193 million megawatt-hours (MWh) to nearly 226 million MWh. Over that same period, residential electricity prices have fallen by nearly the same amount, or 16 percent.

The household savings have not been limited to electricity. From 2008 to 2016, the average price of natural gas delivered to Texas consumers – which is often used for home heating – has decreased by over $2.00 per thousand cubic feet (Mcf), a drop of nearly 15 percent.

John Tintera, President of the Texas Alliance of Energy Producers, attributed the lower power prices to technological innovation and the Texas regulatory system.

“Growing reserves, new geologic trends to be developed, a safe and successful regulatory framework based on State oversight, new research and applied technology, and an infrastructure that is expanding to meet consumer demand guarantees that natural gas will be a go-to fuel for Americans and all our global citizens well into the future,” Tintera said.

Increased production from shale fields in Texas, Pennsylvania, and other states – spurred by technologies like hydraulic fracturing and horizontal drilling – has unlocked a surplus of affordable natural gas. In 2012, the United States overtook Russia as the world’s largest natural gas producer, and earlier this year natural gas overtook coal as the country’s top fuel source for electric power generation.

A recent study from researchers at Harvard University found that low natural gas prices saved the average American household $800 in 2014. The researchers projected those savings would increase to $1,070 per household by 2030.

In Texas, natural gas makes up more than half of the state’s electric power capacity. As a result, the price of natural gas is the primary driver of household electricity prices.

Wholesale energy prices in Texas also hit a record low in 2016, due “primarily” to lower natural gas prices, according to the Electric Reliability Council of Texas.