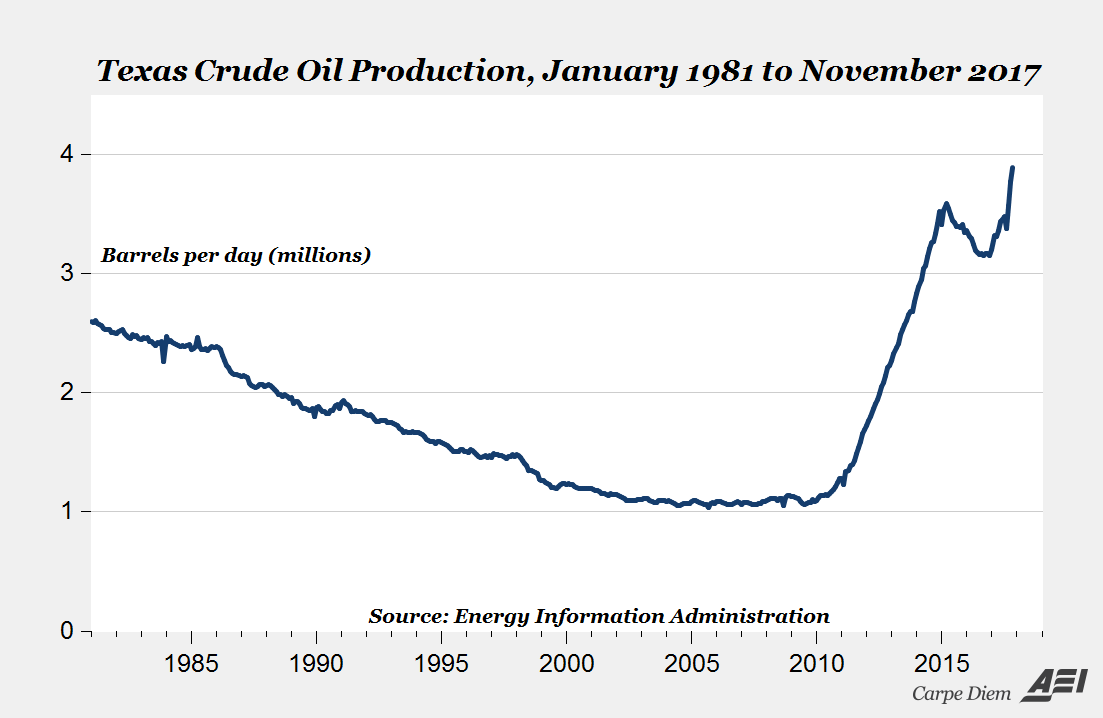 The chart above displays the history of Texas oil production back to 1981 and shows that oil production from conventional drilling and extraction methods gradually declined from about 2.5 million barrels/day in 1981 through 2005 when production bottomed out at about 1 million barrels/day and continued at that output level through 2010. In January of 2010, Texas as a separate country would have ranked as the world’s No. 21 oil producer (see the left side of the table above) when the US was only producing a little more than 5 million barrels per day. But starting around 2010, the shale revolution super-charged shale production in Texas, North Dakota and Oklahoma as advanced, revolutionary technologies (hydraulic fracturing and horizontal drilling) allowed formerly inaccessible hydrocarbon resources trapped in tight shale rock formations to be economically extracted. In just a few short years, surging shale oil production in Texas (Permian Basin and Eagle Ford Shale) completely reversed the 30-year production decline and brought state oil output back to the 2.5 million bpd level by mid-2013. Continued production increases over the next four years have brought the Lone Star State’s crude oil output closing in on 4 million bpd by last November.

I wrote recently on CD about America’s new all-time record oil production of 10.2 million barrels per day (bpd) that was just reached last month, and commented that it wasn’t that long ago that we were wallowing in an era of energy scarcity, worried about our dependence on foreign oil and constantly hearing dire warnings about “peak oil.” Record high oil production in recent months for both the US and Texas further solidifies America’s new status as a world energy superpower in a new era of US energy abundance.The nearly four-fold increase in oil production in the Lone Star State in only eight years, from only about 1 million barrels per day in 2010 to nearly 4 million barrels per day last November has to be one of the most remarkable energy success stories in the history of the US. And it was that unprecedented surge in crude oil output that brought Texas from the world’s No. 21 oil producer in 2010 to No. 7 last year.

And the historic and economic significance of the record high oil output in Texas and the US goes beyond just reaching some new important energy production milestones. While those milestones are certainly important, they also reveal important lessons about American-style capitalism and the American ‘petropreneurs’ who risked their reputations and fortunes, and spent decades trying to “crack the shale code” that finally allowed them to extract oil and natural gas trapped in shale rock miles below the ground when everybody, including the large oil and gas companies, thought that was a crazy and futile exercise. America’s amazing shale revolution in Texas and North Dakota also happened completely independently of any planned government energy policy, and largely without the massive taxpayer subsidies and government mandates that have benefited other more politically-favored energies like solar, wind, and ethanol.

At the current pace of ongoing production increases, oil output in Saudi Texas has likely already topped 4 million bpd and could reach 4.6 million bpd by the end of the year. In that case, it’s not inconceivable that Saudi Texas could surpass Canada, Iran, and Iraq this year and could become the world’s No. 4 oil producer by the end of 2018! Carpe oleum.