“The No. 1 overall message, non-OPEC supply growth is very, very strong, which could change the parameters for the oil markets in the years to come, led by the United States, but also Brazil, Canada and Norway,” IEA Executive Director Fatih Birol said Monday during the CERAWeek energy conference, presented by IHS Markit Ltd. in Houston.

The IEA’s closely watched five-year forecast showed the U.S. hitting new strides in its oil and natural-gas boom, helped by technological advances, improved efficiency and a fragile recovery in oil prices that is encouraging shale companies to ramp up their drilling.

Once heavily dependent on imports from the Middle East, the U.S. is getting closer to achieving its goal of producing enough crude to meet domestic demand for refined products such as gasoline.

Of the 6.4 million new barrels of oil that will be pumped every day between now and 2023, almost 60% will come from the U.S., the IEA said. “And I can tell you our expectations may well need to be revised upwards if prices are higher,” Mr. Birol said.

American influence on global oil markets is also expected to rise, with U.S. oil exports more than doubling to 4.9 million barrels a day by 2023, according to the IEA. Until 2015, the U.S. didn’t export any crude oil by law, but in five years it is expected to be among the world’s biggest exporters.

The IEA’s report also highlights the changing role of the Organization of the Petroleum Exporting Countries, a group of producers that historically dominated world oil markets. 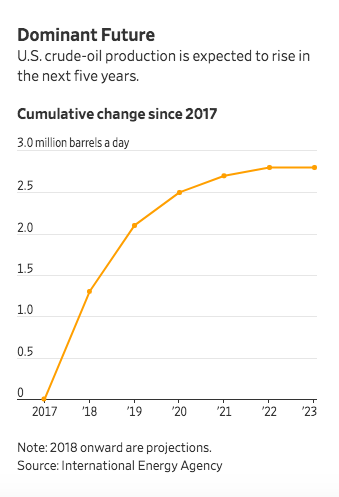 During his own remarks at the CERAWeek conference, OPEC Secretary General Mohammad Barkindo said the producer group’s long-term projections align with the IEA’s report, highlighting concerns about underinvestment in the industry.

More immediately, he touted the agreement of OPEC and some non-OPEC countries such as Russia, which have voluntarily curtailed their production, as important to balancing global markets.

The cooperation that led to an agreement to “literally rescue our industry is as solid as the rock of Gibraltar,” Mr. Barkindo said. Still, he said it was too early to comment on whether the group would extend its limit on production past the end of this year.

Oil production is expected to grow in Canada, Brazil and Norway—all countries outside OPEC. Together with the U.S., those three countries will add enough barrels to meet growing consumption to the end of the decade, the IEA said. Within OPEC, only the Middle East is expected to raise output, as other members such as Venezuela struggle with internal problems.

Saudi Arabia’s crude-output capacity is expected to reach 12.3 million barrels a day in 2023, meaning it could rival the U.S. for the top spot as a producer. But the Saudis have historically pumped well below their capacity to maintain their importance as a so-called swing supplier that can increase or decrease output as the market needs.

Counting all liquids, including those derived from natural gas, U.S. production is likely to rise to nearly 17 million barrels a day over the next five years from about 13 million today, the IEA said, far more than Saudi Arabia or Russia.

Still, without more investment outside the U.S., growth in production would likely begin to slow after 2020, the IEA said. A dramatic slump in oil prices since 2014 has eviscerated investment in the sector outside U.S. hot spots. The IEA warned that companies will need to start spending again to avoid the potential for crude-oil shortages that could cause prices to surge.

Oil consumption is expected to remain robust, shrinking the gap between demand for crude and producers’ capacity to pump it to the lowest level since 2007—when oil prices were on a run toward record levels above $140 a barrel.

“We see a robust oil demand growth through 2023 and China continues to be the main driver,” Mr. Birol said.