A Fracking Ban Would Cost Every American Family $5,000 Per Year

An economic impact study released today examined the potentially devastating impacts a ban on fracking would have in the United States. The American Petroleum Institute (API) released the study amid promises from Democratic presidential candidates to ban fracking if they were to win in November.

The study outlined the dire stakes of a fracking ban, citing staggering job losses, an increased financial burden on American families, and the stripping of America’s hard-won energy security. Here are the key takeaways:

1. A ban on fracking would destroy 7.5 million jobs

Though many keep-it-in-the-ground activists would like to argue otherwise, oil and gas development remains an essential pillar in the American economy. By undermining domestic energy production, a fracking ban has the potential to launch the United States into another recession.

The numbers in the report paint a shocking picture. API found that in the case of a fracking ban, the United States would lose a cumulative $7.1 trillion in GDP by 2030. In the short term, the U.S. economy would be at risk of losing $1.2 trillion by just 2022.

Texas would be particularly hard hit by such a ban. API’s report estimated Texas alone would lose more than 1.1 million jobs in 2022. For context, Texas would lose more jobs than the entire population of Austin. Total job losses across the country would reach 7.5 million.

2. Electricity prices would increase by 20%

The economic impact would directly hit American families, as well – household income would decline $5,040 per year.

Prices at the pump would increase, too. Gasoline prices would average 15% higher.

3. America would increase its reliance on foreign oil

Right now, Texas is the country’s top oil producer, a key reason why the United States – after decades as a net importer – is now able to export 3 million barrels per day, propelling the U.S to be become a net exporter of oil.

Banning hydraulic fracturing would reverse that. America would increase its dependence on foreign suppliers for more than 40% of its oil needs by 2030. In fact, net natural gas and oil imports would increase the trade deficit by a cumulative $3.1 trillion through 2030. 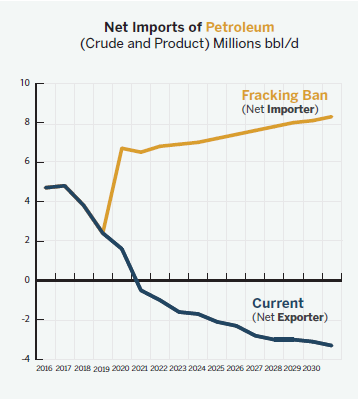 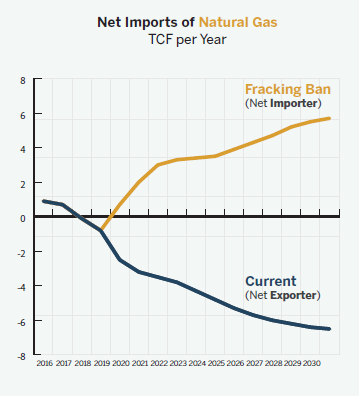 A fracking ban also has serious implications for the environment.

Several reports – including TNG’s own analysis, along with a report from the Texas Railroad Commission – have shown that the United States and Texas rank significantly below other world producers when it comes to flaring intensity. We know that global demand for oil remains robust, and if we stop producing it here in the United States than our competitors overseas will fill the gap. If production were to be concentrated in other countries with much higher flaring intensities, such as Venezuela, Iran or Russia, we would see increased emissions.

4. Farmers would suffer under painful increases in production costs

A fracking ban would even affect America’s agricultural sector. Farmers would struggle with rising production costs, as energy costs (both indirect and direct) can make up to 48% of total production costs for crops, including wheat and corn. With a rise in the cost of energy, the cost of farming would also rise – with the cost of wheat and soybean farming increasing 64% and 48% respectively.

Texas, which leads the nation in the number of farms and ranches with 248,416 farms and ranches covering 127 million acres, would be doubly hit by the effects of a fracking ban. The cattle farms that span across Texas would see the price of their feed – primarily composed of corn and oats – skyrocket.

The facts are clear: banning fracking would lead to economic destruction in Texas and the United States.