The feat demonstrates how the US shale oil boom has reshaped the global energy landscape. American oil output has more than doubled over the past decade.

"It's an historic milestone and a reminder: Never bet against the US oil industry," said Bob McNally, president of Rapidan Energy Group, a consulting firm.

Texas is the epicenter of the shale boom. Production in the Permian Basin of West Texas has grown so much that in February the United States vaulted above Saudi Arabia for the first time in more than two decades, according to the US Energy Information Administration.

US output kept climbing in June and August, reaching nearly 11 million barrels per day. That nudged the United States ahead of Russia for the first time since February 1999, the EIA estimates.

The United States isn't expected to cede its crown any time soon. The EIA expects US oil production to stay ahead of Russia and Saudi Arabia through 2019. 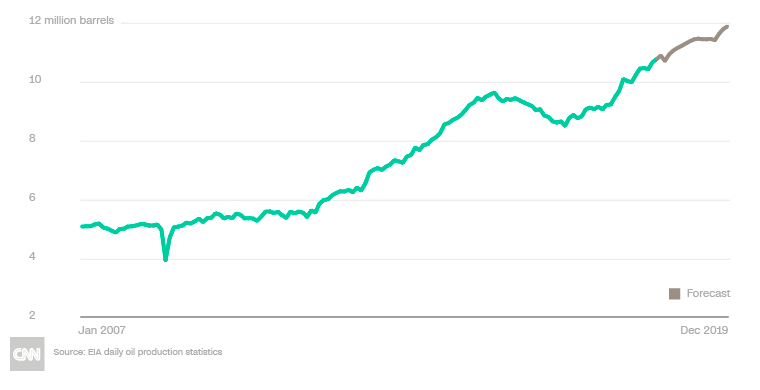 The achievement underscores the profound impact of rapid technological advances in drilling. Fracking unlocked vast sums of oil and natural gas that had been trapped underground. Drilling costs declined dramatically.

"That changed the game for the US. It meant we could be resilient and competitive," said Ben Cook, portfolio manager at BP Capital Fund Advisors, an energy investment management firm.

That resilience was required after oil prices crashed beginning in late 2014. OPEC launched a price war to regain market share lost to the United States and other oil producers. Falling prices knocked dozens of US oil companies out of business and caused widespread job losses.

US oil production declined -- but not as dramatically as feared. And when prices began to rebound in 2016, US shale companies were able to quickly ramp up output. Their expenses were lower -- and technology had improved.

Texas Is An Oil Superpower

Major oil producers including BP (BP) and ExxonMobil (XOM) have shelled out billions of dollars in recent years to get a piece of the action in the Permian Basin.

The Lone Star state is on track to produce more oil than either Iran or Iraq. That would make Texas No. 3 in the world if it were a country. And the state's biggest port district recently exported more crude oil than it imported.

"It's all about technological improvements, supported by ample capital to invest, and the ingenuity of American oil drillers," said McNally, a former energy official under President George W. Bush.

Now, Texas is trying to manage the boom. There's been such a gold rush mentality in the Permian Basin that the region is quickly running out of pipelines, workers and supplies.

If anything, the Permian has been a victim of its own success. Production is expected to keep rising -- but not by as much as previously thought.

Concerns about the Permian led the EIA to downgrade its growth forecast for 2019 US oil production to 11.5 million barrels per day. For context, that still represents strong growth -- and would still top expected output from Russia and Saudi Arabia. The United States produced 9.4 million barrels per day in 2017.

The shale boom has important security implications. Today, the United States is less reliant on foreign oil, including from the turbulent Middle East.

However, it's still a global oil market and strategy shifts by OPEC and Saudi Arabia continue to have significant influence over prices.

And the United States can't meet its voracious appetite for oil by looking inward only. US oil refineries, which were mostly built decades ago, still require heavy doses of foreign oil.