The upstart company, backed by private equity, had been planning to build a conduit capable of carrying 440,000 barrels a day from West Texas to Corpus Christi on the Gulf Coast. Now, it’s considering enlarging it to 675,000 barrels a day, after interest picked up in recent months.

Bottlenecks have become a problem in the Permian Basin of Texas and New Mexico at the center of the shale boom. Drillers are pumping so much oil and gas that pipelines considered more than adequate just a few years ago now are overwhelmed.

That is creating opportunity for pipeline builders, who are planning an array of new oil and gas conduits in Texas, where they see increased demand from customers willing to pledge to contracts.

Epic Midstream Holdings, Plains All American Pipeline LP, and Phillips 66 in a partnership with refiner Andeavor are building new oil pipelines aimed at Corpus Christi that are set to add upward of 1.8 million barrels of combined capacity late next year. 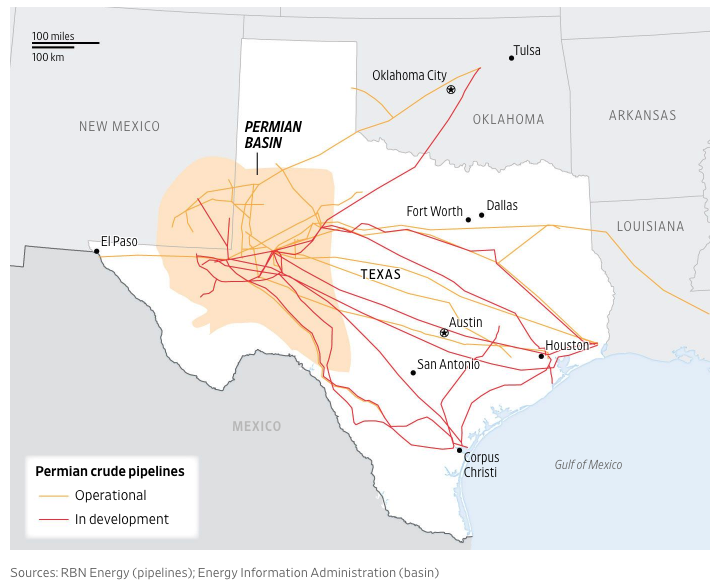 “We’re getting a lot of encouragement from Permian producers to accelerate,” Phillips 66 Chief Executive Greg Garland said. “For the past six months the interest level has been high and remained very high.”

The projects aim eventually to alleviate the Permian’s bottlenecks, which are causing some of the region’s oil and gas to trade at steep discounts to benchmark prices. Producers selling oil in Midland have recently fetched about $16 a barrel less than what sellers are getting in Oklahoma, according to RBC Capital Markets.

Some analysts, though, say the new pipelines could face delays and increased costs, which could be get worse as a result of President Trump’s 25% tariffs on steel imports.

Permian drillers now are extracting 3.3 million barrels of oil a day, according to Energy Information Administration estimates, making that oil field alone one of the world’s leading producers. To put that in perspective, that’s more than the average daily crude production of the United Arab Emirates last year, according to the EIA.

Nearly all crude pipes leaving the Permian were operating at full capacity last quarter, up from an average 94% capacity during the previous three months, according to East Daley Capital Advisors. The congestion is expected to worsen over the next year and a half, further depressing local crude prices.

Magellan Midstream Partners LP has been able to lock in longer-term customers for shipping oil at premium rates, while Enterprise Products Partners LP is discussing converting a gas liquids pipeline to carry oil.

Magellan Chief Executive Michael Mears said at a recent conference that customers with contracts set to expire in September had begun renewing them at above market rate.

“The expectation over the next two years obviously is the differential is going to stay relatively high until the new pipeline infrastructure gets built,” he said. “So everyone, intuitively, exercised their option to extend the contracts for two years.”

Morgan Stanley has projected slowdowns of three to six months for some of the area’s new pipeline projects, citing concerns about right-of-way acquisition and the complexity of proposed lines. It forecasts that lack of pipeline capacity will force drillers to curtail their activity next year, limiting annual oil production growth in the Permian to 360,000 barrels a day, down from Wall Street’s consensus estimate of 650,000 barrels.

Some companies also might face higher-than-expected materials costs because of the tariff on imported steel. The U.S. Commerce Department earlier this month rejected Plains All American’s request to waive the tariff on a specialized pipe it plans to use in its West Texas pipeline.

Plains Chief Operating Officer Willie Chiang said in recent testimony to the House Ways and Means Committee that the charge was “a major unexpected, unjust retroactive tax that affects the project’s economics.”

The tariff increases the cost of the $1.1 billion pipeline by about $40 million, Mr. Chiang said. Plains has said it intends to move forward with the project as planned.

Phillips 66’s Mr. Garland, meanwhile, said the tariff would have “minimal” impact on the company’s planned West Texas pipeline. “Most of the pipe is American-made,” he said.

Still, Texas is more amenable to new pipelines than many other parts of the U.S., where regulatory hurdles and local activism have made it challenging to complete projects. “You notice no one is proposing a pipe to go from New Mexico to Texas,” said Charles Robertson II, a managing director at Cowen & Co.