Dallas Fed: Gas Prices Are Regionally Dependent, Not the Result of Gouging

This week, Congressional Democrats are planning to move legislation that would expand the Federal Trade Commission power’s to crack down on allegations of price gouging by energy companies. Meanwhile, the Federal Reserve Bank of Dallas just released a report detailing how gas prices are outside the reach of oil and natural gas producers.

Further supporting the Dallas Feds’ report, previous investigations have not found a single instance of coordinated price gouging, making the move more of a distraction from the energy policies that would increase domestic supply and provide consumers some relief at the pump.

Oil is traded in a global marketplace and prices in the United States reflect the supply-and-demand fundamentals of this competitive and globalized market. Still, the United States is much better off than other nations, with non-producing countries like Germany and Italy paying $8.15 and $7.33 per gallon, respectively.

In their March analysis of the Russian oil supply shock of 2022, the Dallas Fed noted that the world is witnessing “one of the largest [oil] supply shortfalls since the 1970s.” Since then, Texas producers have since responded to the outcry for relief at the pump, with a forecasted 82,000 barrels per day increase in Permian Basin production between April and May. In fact, production across the United States is up – 52 percent of oil and natural gas companies surveyed by the Dallas Fed reported an increase in oil production.

The increased rate of production in the U.S. is helping styme the pain at the pump, but as the Dallas Fed makes clear in their recent article, its impact is relatively small.

In this context, the House’s legislation reads as political theater. Prices are not set by some shadowy cabal of companies, and repeated inquiries of price gouging in the energy industry over the decades yielding nothing. USA Today reported there has been “more than 100 investigations” and not a single one has found any evidence of gasoline price gouging:

“More broadly, the retail gasoline market is fragmented despite consolidation that has left some companies owning multiple stations. If a gas station jacked up its pump price too sharply, it would lose business to rivals, says Phil Verleger, an industry analyst and economist and a senior fellow at the Niskanen Institute. Because of that kind of competition, it isn’t illegal for a company to raise its prices well above the rest of the market to fatten its profit margin.”

‘There’s no such thing as price gouging,’ Verleger says. Over the past 30 years, there have been more than 100 investigations and lawsuits brought by consumers, the FTC and states' attorneys general alleging such conspiracies in the gasoline market. ‘They all flopped,’ Verleger says.

And during a hearing held by the House Energy and Commerce Committee, Secretary of Energy Jennifer Granholm commented that she’s skeptical about accusations of wholesale gouging.

The Dallas Fed’s article makes clear that gas prices are highly regionally dependent. Crude oil supplies the base for gasoline, but the refining, distribution and marketing of gasoline play a significant role in the final price. If the refining facilities are far away and the distribution lines are long, prices increase accordingly. 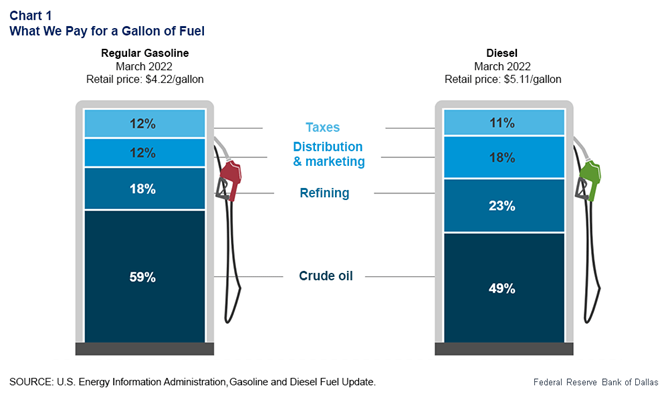 It is through dynamics like these that a temporary outage in a Southern California refinery can keep prices high in Phoenix, Arizona, while Texas and other regions saw prices fall.

Texas has 29 percent of the nation’s total refining capacity and a robust distribution network to move it to customers. Meanwhile, refineries in the Northeast, California, and Washington had imported significant amounts of Russian crude oil to meet demand. The entire East Coast has seen output decline by two-thirds in the last 15 years after a number of plants closed, and California has blocked new fracking permits and moved towards phasing out oil extraction. 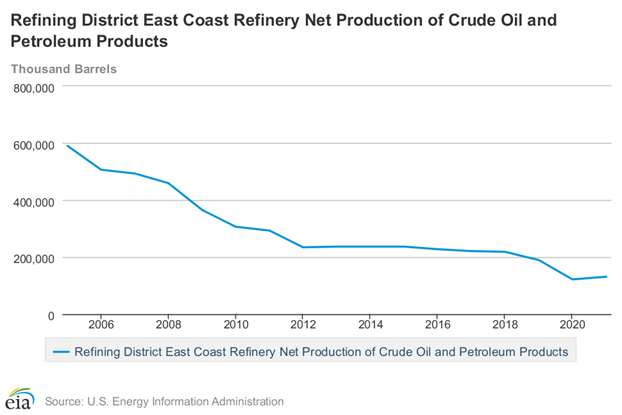 And now representatives from those states are demanding the FTC look into price gouging as a paltry attempt to explain to their constituents how their poor energy planning has made gas prices so high.