According to state and local emissions data, the Eagle Ford Shale is not a major contributor to ozone in the San Antonio metropolitan area. In fact, there is evidence that increased local use of natural gas in Bexar County has helped the region reduce its ozone concentrations, while also keeping power bills affordable for San Antonio families.

There are a variety of local activities that play a role in San Antonio’s ozone levels, including the hundreds of thousands of cars and trucks that shuttle people to and from work every day. But these local activities are only part of the story, as emissions are not confined to geographical borders.

International sources in this analysis refer to emissions found on the edges of the largest photochemical modeling area, which encompass the United States, offshore, Northern Mexico and Southern Canada. These are also referred to as the “boundary conditions.” While the countries of origin are not specifically defined, factoring in these boundary conditions, as the Texas Commission on Environmental Quality (TCEQ) states, helps the model to “account for emissions and the transport of pollutants from outside of Texas and the United States.” 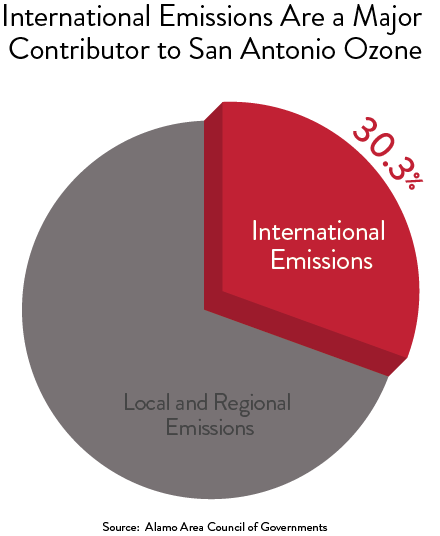 The impact these international sources can have on regional ozone levels underscores how ozone is a complex problem that cannot be solved by simply blaming a single local industry. As shown in the next section, this is especially true when that industry accounts for just a small fraction of total emissions.

Analyzing the data further, the contribution of oil and gas development on Bexar County ozone levels is minimal. According to AACOG, only about 5.5 percent of local ozone emissions is attributable to oil and gas production. When compared to other sources, such as automobiles – responsible for almost 39 percent of local ozone emissions – oil and gas development is far from a major contributor to regional ozone. 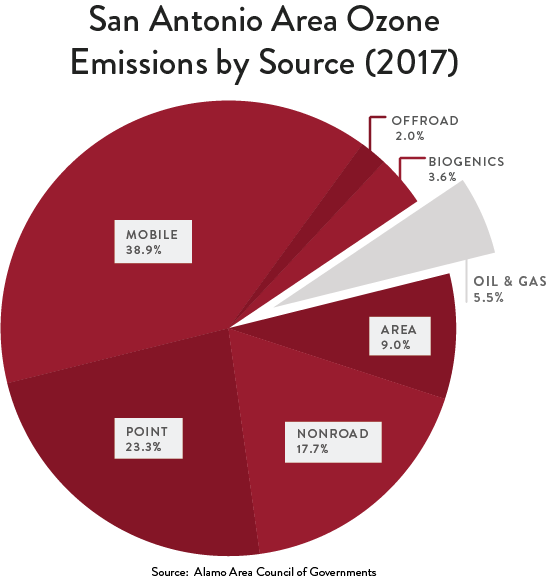 Natural gas use for electricity generation has grown substantially in Bexar County in recent years. According to CPS Energy, the local power utility, the share of natural gas in San Antonio’s electricity generation portfolio has grown from 39 percent in 2010 to roughly 46 percent this year. By replacing higher emitting fuels, the increased use of clean-burning natural gas has helped drive down ozone levels in the region.

Data from the Texas Commission on Environmental Quality (TCEQ) show that ozone concentrations in Bexar County declined by four parts per billion (ppb) between 2010 and 2018. While four ppb might not seem significant, EPA’s controversial decision to lower the federal ozone standard by just five ppb – from 75 ppb to 70 ppb – was the difference between San Antonio meeting and not meeting its attainment requirements.  Additionally, the decline in ozone is significant because it occurred even as San Antonio’s population has grown by about 190,000 people – or about 14 percent - since 2010. 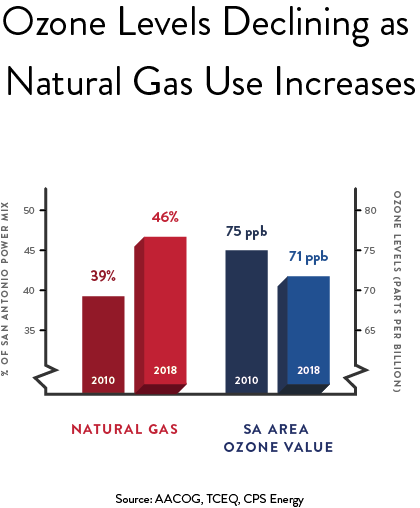 The share of natural gas in San Antonio’s electricity mix grew from 39 percent in 2010 to 46 percent this year. As a result, residential electricity prices in the region are now 12 percent lower than the national average. In fact, earlier this year, CPS Energy cited low natural gas prices as a key reason why the utility was able to avoid a rate hike. 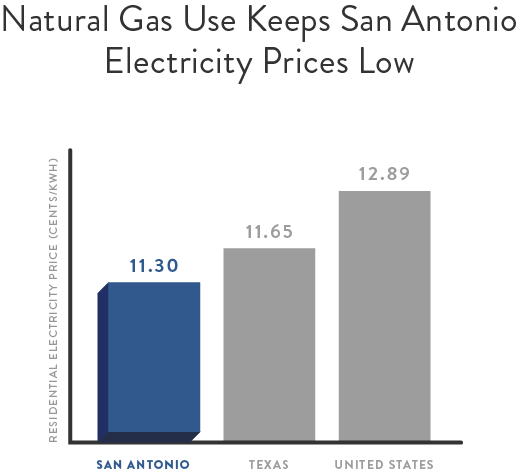 While critics may suggest emissions from oil and gas production are a major cause of ozone problems in San Antonio, the data show otherwise. Air quality in San Antonio has been improving, and that progress has been made possible by the increased use of affordable natural gas in the power mix.