No energy source has had a greater impact in the reduction of energy-related carbon emissions than natural gas, according to a new report from the Energy Information Administration (EIA).

Spurred by soaring natural gas production from the shale revolution began to take flight, the United States began the shift towards building more natural gas power plants, taking advantage of the abundant, low-cost, clean burning resource. Between 2005 and 2018, the EIA calculated reductions in U.S. CO2 emissions are “attributable specifically to shifts from coal to natural gas.” In fact, the increased use of natural gas over coal for electricity generation led to a reduction of more than 2.8 billion metric tons of CO2 emissions over this period, making natural gas the largest source of energy-related carbon savings.

Put another way, the amount of energy-related CO2 natural gas prevented is equivalent to taking nearly 595 million cars off the road for a year. That’s twice as many vehicles as the total number of registered cars and trucks in the United States. 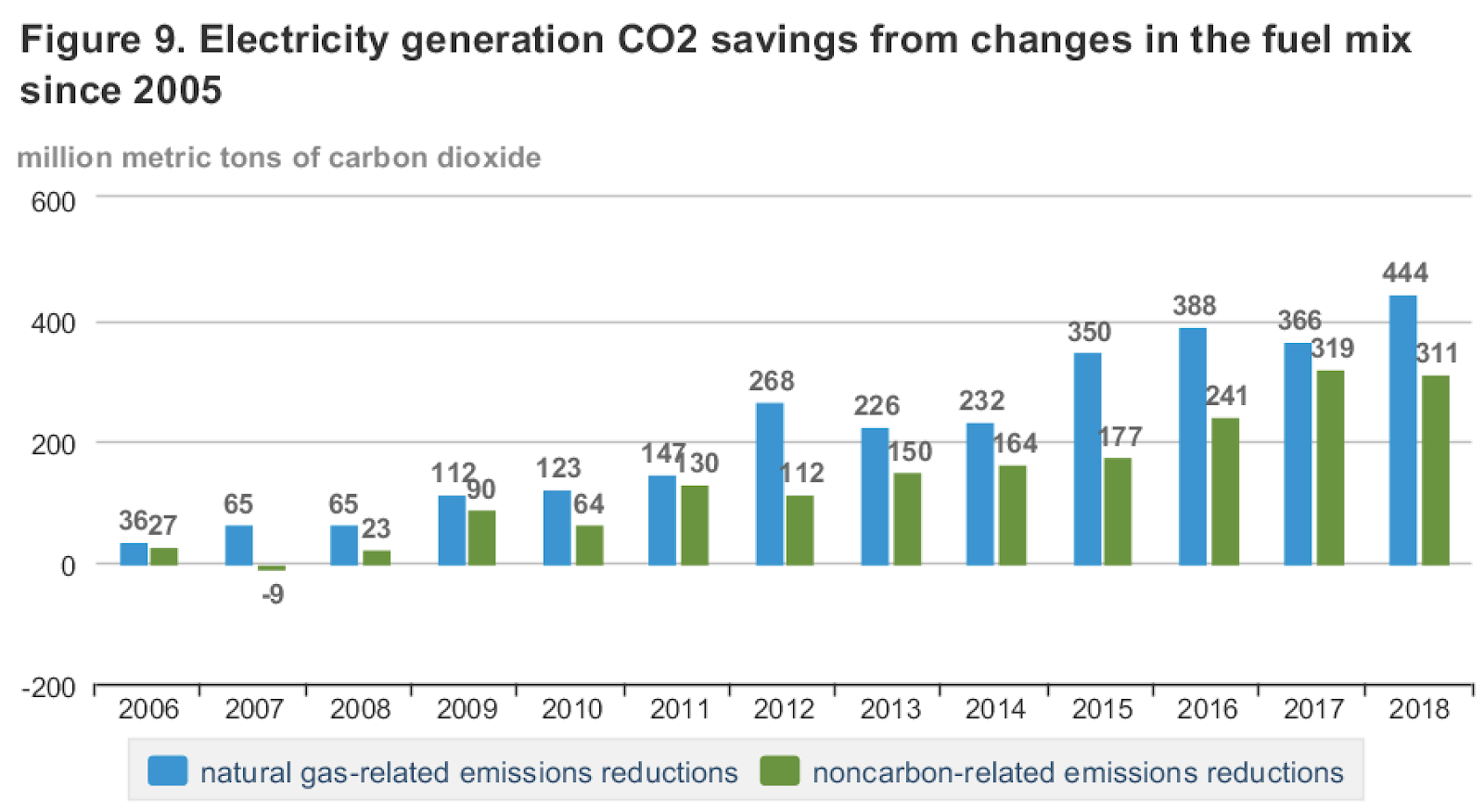 This reduction of CO2 emissions is made more impressive by the fact that U.S. demand for electricity increased 4 percent from 2005 through 2018.  Though many expected sources like wind and solar would be driving these reductions, it’s important to note during the same time period natural gas emissions savings were 57 percent greater than renewables.

Given its environmental benefits and low-cost for consumers, natural gas will continue to be a highly attractive fuel source for energy generation, and no state produces more of it than Texas. Last year, thanks to shale development – particularly in the Permian Basin and Eagle Ford Shale - the state produced 18.7 billion cubic feet per day (Bcf/d) of natural gas. That’s equivalent to about one quarter of the nation’s marketed natural gas production.

As the nation’s leader in natural gas production, Texas heavily relies on these homegrown resources as the fuel source to generate the majority of its electricity. In fact, driven by the vast amount of natural gas produced in the state’s shale regions, the Lone Star State generates more electricity than any other state -- twice as much as Florida, the second-highest producing state.

Texas’ utilization of natural gas as a source for electricity generation - along with increasing use nationwide - will continue to benefit of the consumers and the environment. EIA projects the share of U.S electricity generation from natural gas-fired power plants will rise from 34 percent in 2018 to 37 percent this year, and 38 percent in 2020. The expected increase will allow cause energy-related CO2 emissions to decline by 1.7 percent and 2.0 percent in 2019 and 2020, respectively.

In its Annual Energy Outlook 2019, EIA’s long-term projections show most of the electricity generating capacity additions will come from natural gas combined-cycle plants through 2050. With a sizeable number of these plants already in various stages development and an increasing amount coming online the years ahead, the U.S. will continue to experience the benefits of utilizing natural gas as an energy source for the foreseeable future.

The U.S. is currently the third largest LNG exporter, and is projected by the International Energy Agency to become the world’s leading exporter by 2024. As the U.S. continues to grow its trade network, it will enable nations across the globe to make the same transition, further reducing energy-related CO2 emissions on an increasingly large scale. Driven by American energy leadership, the combined impact on global air quality will be immense, and was entirely unimaginable even a decade ago.