In recent discussions, the Environmental Protection Agency (EPA) has expressed interest in classifying parts of Texas’s prolific Permian Basin as a non-attainment area. The designation identifies regions where air quality levels are worse than the National Ambient Air Quality standards recognized in the Clean Air Act Amendments of 1970.

In other words? The EPA means to designate the region as one that contains large quantities of air pollutants such as carbon monoxide or ozone. Upon declaration of this status, the area of concern must begin to take actions to reduce emissions to meet acceptable levels of the specific pollutant.

Classifying a region as “non-attainment” subjects the region to a variety of regulations. According to the official EPA website, requirements are customized specifically for each nonattainment area, however, all include:

In the case of the Texan Permian Basin, this designation could lead to “draconian regulations that would directly interfere with the nation’s most prolific oil field,” as stated by Gov. Greg Abbott in his letter to President Biden.

In his letter, Gov. Abbott expressed extreme discontent with President Biden and the EPA for their potential role in increasing gas prices around the nation. He stated:

“The EPA’s process could interfere in the production of oil in Texas which could lead to skyrocketing prices at the pump by reducing production, increase the cost of that production, or do both. Your administration's announced action is completely discretionary. Thus, you have the power to stop it. If you do not, this action alone might serve as a catalyst for economic harm leading to an even deeper reliance on imported foreign energy and a faster economic decline into the pending recession by forcing even more pain for American consumers to pay at the pump.”

As an advocate of the Texas oil and gas industry and the citizens around the nation who depend on the resources it produces, Gov. Abbott demanded a response from the president by July 29th.  If not, he would be forced to take necessary actions to “protect the production of oil.”

If successfully classified as a non-attainment region, oil and gas producers in the Permian Basin will have to slow down production to reduce emission levels. Right now, as world energy demand surges, crippling production would be not only detrimental to the economy but to the wallets of everyday Americans.

Congressman August Pfluger, the representative for much of the region, has openly criticized the EPA’s plan. In a statement provided to the Midland Reporter-Telegram, he mentioned, “Slowing down production in the Permian Basin, the largest secure supply of energy in the world that supplies 40% of the United States’ production, will increase America's dependence on foreign oil and lead to higher costs at the pump. I will continue working with local, state, and federal leaders to ensure the Permian can continue fueling America and our allies around the world.”

The Permian Basin is a significant contributor to the oil and gas industry in the United States. According to the Federal Reserve Bank of Dallas, in 2021 the region was responsible for 16.8 percent of U.S. natural gas production and that following year 43.1 percent of oil production.

An illustration of the U.S. oil production share located in the Permian Basin (1996-2020) 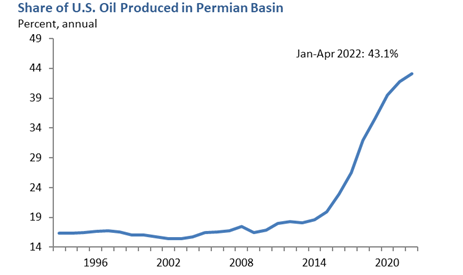 An illustration of the U.S. Natural Gas production share located in the Permian Basin (1994-2022) 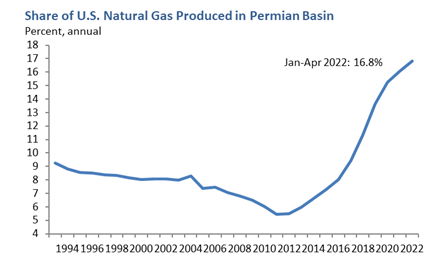 This number is only set to rise as producers are breaking production records to meet rising demand. According to the EIA, projections show that energy consumption in the U.S. will increase by an estimated 17% between 2020 and 2050 due to increasing population and economic growth. The graph below illustrates how the production of oil and gas has steadily risen over time.

Declaring the region as a non-attainment area would be a devastating blow to the entire U.S. oil and natural gas production industry. The designation does not take into consideration a vital fact involving the target’s emissions levels – how its largest contributors often aren’t located in the area of concern or are unavoidable due to naturally occurring processes.

One look at a case in Utah illustrates how ineffective the designation can be. In 2018, the EPA identified the Northern Wasatch Front (NWF) as an area of non-attainment. In response, the state appealed the designation using a 179b appeal waiver on behalf of the Utah Petroleum Association to receive an exemption. In information obtained from The Utah Physicians for a Healthy Environment, Utah is asking the EPA to “accept evidence that a significant portion of our ozone, and/or ozone precursors, originates outside our borders, especially in Asia.” With this exemption, higher levels of ozone will be acceptable for the NWF area.

Emissions are a complex issue to attribute to one source. Natural processes such as wildfires or neighboring regions can lead to heightened levels in the area. Pollutants from Asia often travel across the Pacific Ocean and cause emission levels in the United States to rise. According to the EPA, in the case of Utah, 95% of ozone levels are outside of their control.

Permian Basin oil and gas are some of the cleanest resources produced in the world. In comparison to other global producers, flaring intensity in Russia was 239% higher than the region or 2,081% in Venezuela.

At the stake of the U.S. economy and the pocketbooks of its citizens, the EPA must reconsider their actions to designate the Permian Basin as a non-attainment area. The implications of this decision will be felt across the nation as oil and gas companies are forced to reduce production in efforts to lower emission levels. For the sake of our nation where the demand for oil and gas is steadily increasing, steps must be taken to protect the region where it is the most abundant.