Everyone is Talking About Hydrogen – So What Is It?

There has been a lot of discussion on hydrogen this past year, and while many individuals know it is a critical component of H2O, you may not know how it is becoming part of our energy portfolio in Texas and beyond.

As the lightest and most common element in the universe, hydrogen is everywhere in our daily lives, bonded together with other elements to form compounds such as water (H2O) and methane (CH4). Using these compounds, companies have developed processes to separate the hydrogen from other elements, harnessing the pure hydrogen as an energy carrier to transport and store energy for future use. In that way, hydrogen molecules behave and could be used similarly to natural gas.

Companies today are using a few processes to produce hydrogen, including steam methane reforming and electrolysis. While these processes may at first seem complicated, they only have a few key steps. And the tools necessary to produce hydrogen – natural gas and renewables – are found in abundance in the Lone Star State, making hydrogen a potentially big player in the state’s energy future.

Once hydrogen has been produced, its storage, transportation, and use are very similar to natural gas, allowing consumers across Texas to integrate it into their daily lives as a zero-emission fuel. In fact, when hydrogen is used in a fuel cell to propel a truck or to run a generator powering homes or businesses, the only byproduct is water. The diagram below outlines the two main types and processes of low-carbon hydrogen production. 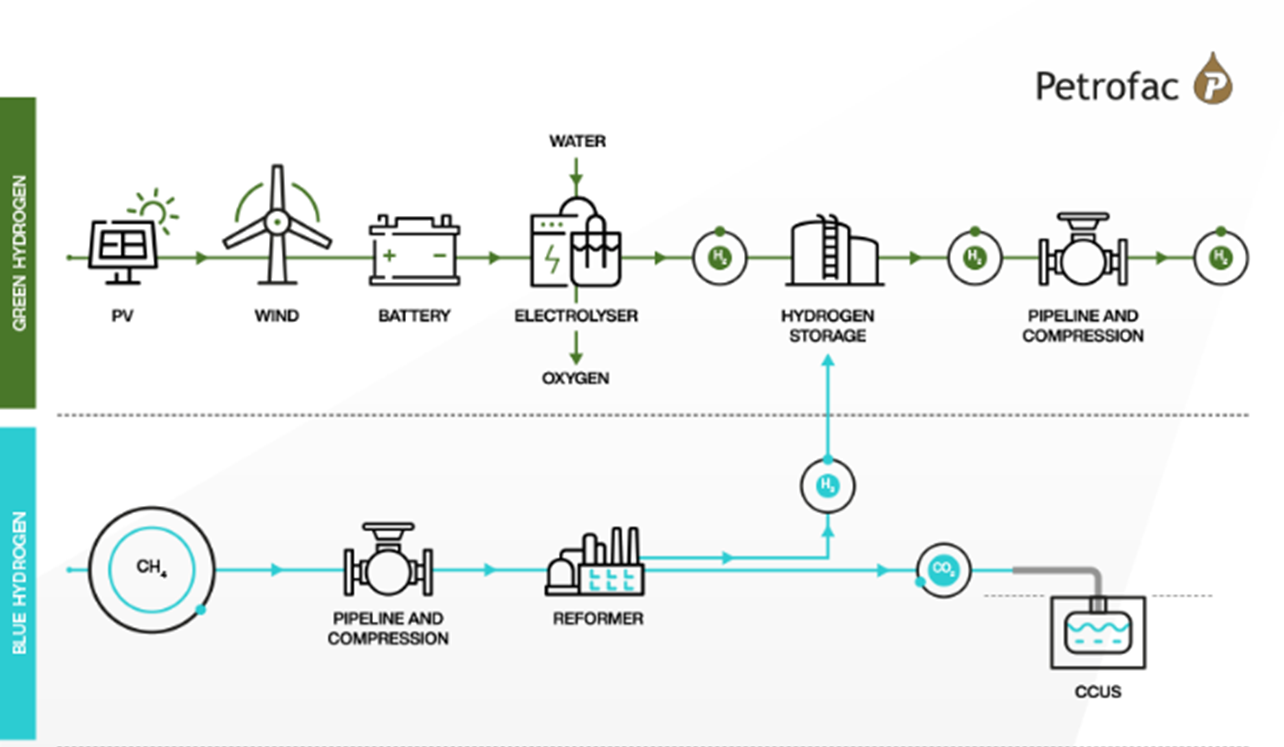 Green hydrogen uses renewable energy to power an electrolyzer which uses electricity to separate water into hydrogen and oxygen. While green hydrogen is a renewable way to produce hydrogen, it only makes up a few percent of hydrogen production today and is currently the most expensive production method.

Blue Hydrogen uses methane or natural gas in a process known as steam methane reforming to separate the natural gas into hydrogen and carbon monoxide, which is converted to carbon dioxide. The carbon dioxide emissions are then captured using carbon capture, and storage (CCS). When CCS is used, this process has very low emissions. This production method takes advantage of Texas’ abundant supply of natural gas and produces a low-carbon energy source capable of decarbonizing hard-to-abate sectors like long-haul trucking or steel production.

Once the hydrogen has been produced, it is either stored on-site for future use or transported by pipeline, boat, or truck to its destination. Like natural gas, hydrogen can be transported and stored either as a gas or as a liquid at -423.4 degrees Fahrenheit. Hydrogen’s similarities to natural gas make it very familiar for the oil and natural gas industry to work with and handle.

In fact, companies, cities, and countries around the world, including in Texas, have started testing hydrogen in our pipeline infrastructure. Currently, the U.S. Department of Energy is testing hydrogen’s ability to be blended with natural gas into our systems around 10-15 percent. Due to differences in the molecules, pipelines that carry 100 percent clean hydrogen may require new infrastructure.

Hydrogen in our Lives

Hydrogen is a truly versatile energy carrier that can be integrated into many parts of our day-to-day lives. It can be used to cook like natural gas, power your truck down the highway, used in your backup generator, and power the industries that make Texas great.

Hydrogen has a key role to play in reducing industrial emissions. By leveraging clean hydrogen, chemical plants, concrete producers, and steelmakers will have a zero-emission fuel source with the energy density necessary to create the high heat that is required for those various industrial processes.

These industries, which cannot easily use electricity to reduce their emissions, are called hard-to-abate (or hard-to-electrify) sectors and would benefit significantly from the use of hydrogen derived from natural gas. They can continue to produce their critical goods to build highways, homes, and cars without making significant compromises that would decrease their productivity. Additionally, they can reduce emissions in heavily industrialized areas, improving the health of the community and attracting even more investment to the area. In fact, companies are developing hydrogen hubs, centralized groups of industry and hydrogen infrastructure, to decarbonize large areas. One of these low-carbon hubs is developing near Houston, along the Texas Gulf Coast.

The Future of Hydrogen

While some may view hydrogen as a relative newcomer to the energy world, it is quickly rising up the ranks as a key technology to leverage existing resources, grow the economy, and reduce emissions. Not only can it be produced by multiple energy sources, but hydrogen is also a truly flexible energy carrier that can power everything from your truck to the 600-worker factory down the road. Hydrogen will continue to grow in the oil and natural gas industry, providing a low-emission fuel for years to come, combining the benefits of natural gas and renewables.