According to the new analysis, there are “consistently positive relationships between LNG exports and measures of economic performance,” due to the economic benefits of increased production – including employment, tax revenue, and other indicators – and the “wealth transfer to the U.S. from the rest of the world” as a result of LNG sales abroad.

“Throughout the entire range of scenarios, we find that overall U.S. economic output is higher whenever global markets call for higher levels of LNG exports, assuming that exports are allowed to be determined by market demand,” the DOE report concluded. 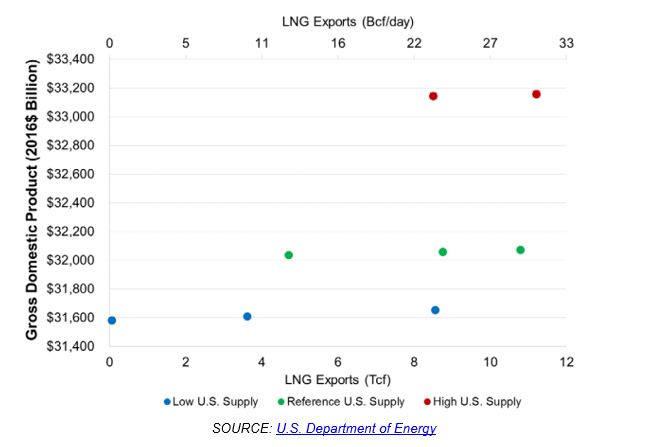 Before an LNG export facility can be built, the federal government must determine if the project serves the national interest. Projects that will export only to countries with which the United States has free trade agreements are automatically deemed in the national interest. DOE has received dozens of applications to export in recent years, many of which are still under review.

DOE has now published three studies on LNG, all of which point to overall economic benefits from exports.

In 2012, export critics alleged that approving LNG export facilities would harm the economy by raising domestic energy prices. But an analysis from Texans for Natural Gas last year demonstrated how those predictions never came to fruition. From 2010 to 2016, total natural gas exports from the United States more than doubled, while Henry Hub natural gas prices declined by 42 percent over the same period.

Last year, the United States became a net natural gas exporter for the first time since 1957