Europe is facing an energy crisis with fuel shortages and price spikes threatening food supplies and affordable access to electricity. Natural gas is a crucial part of Europe’s energy and climate security, but a focus on other low-carbon technologies has prevented the region from producing and importing the energy the region needs this winter.

U.S. LNG production and exports have quickly risen in recent years and helped to meet energy demand in Europe and Asia. The United States’ ability to meet global demand is thanks in large part to Texas’ shale gas reservoirs that provide abundant, affordable gas with a lower carbon intensity compared to other regions of the world. The five graphs below explain why U.S. and Texas LNG are uniquely equipped to meet supply demands for the EU.

European stockpiles have hit their lowest point since 2013. Natural gas reserves were depleted after an unusually long winter that extended through April. Normally this would not be a problem, as gas inventories would be replenished as the post-pandemic economic recovery surged, but because last winter was longer than expected, more natural gas was needed to keep warm and the stockpile was lower. To make matters worse, Europe’s stringent climate policies like carbon taxes and punitive measures to accelerate the region’s energy transition has prompted some producers to halt natural gas production, further limiting supply. 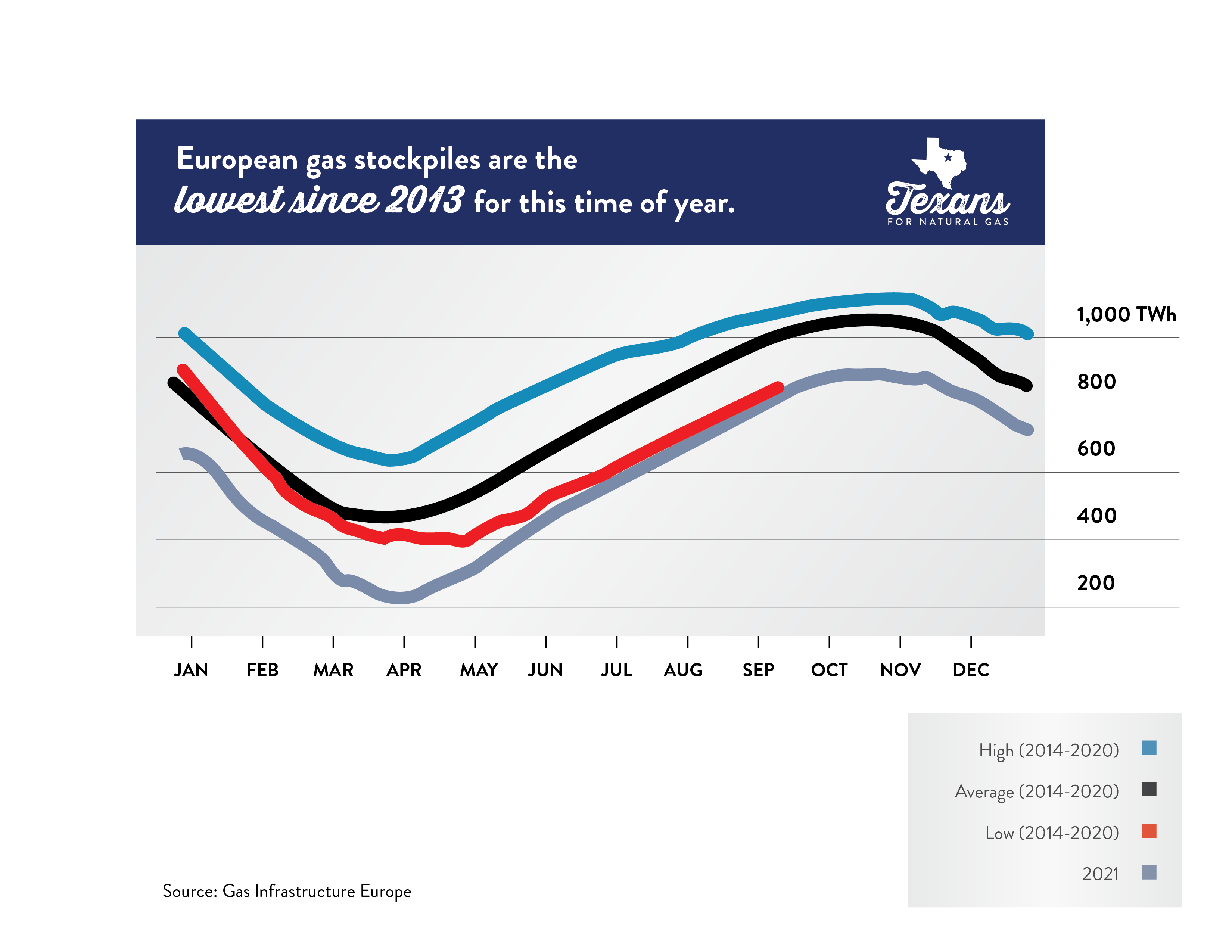 But oil and gas continue to dominate as energy sources in Europe. Despite Europe’s efforts to spur the energy transition and phase out fossil fuels, oil and natural gas constitute the largest share of primary energy consumption in the region. 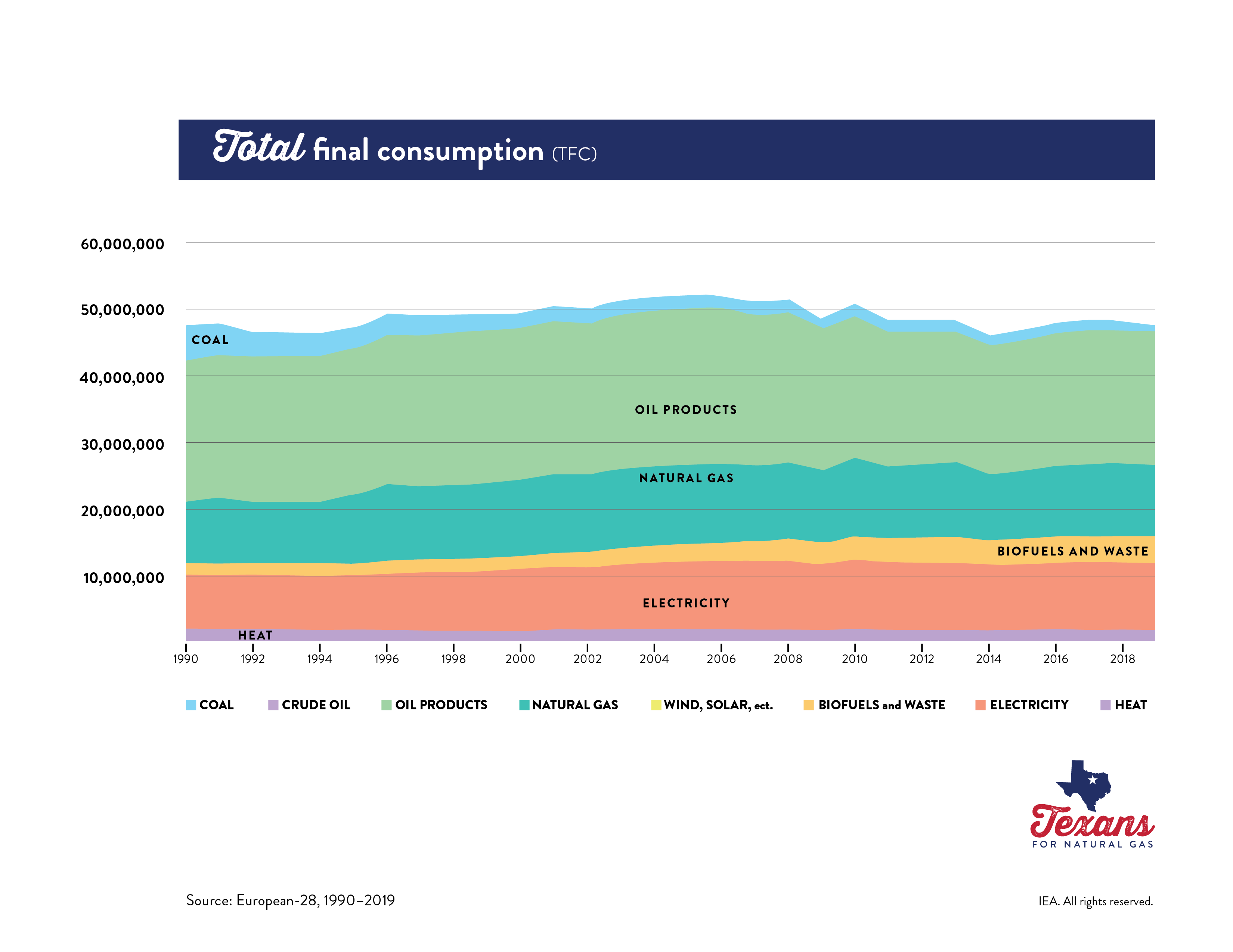 Europe’s biggest economies still depend heavily on gas, despite investment in other fuel sources. Countries with large electricity markets like Germany, the UK, Spain and Italy still rely on the use of natural gas, despite a well-diversified power mix that includes hydro, nuclear, wind and solar. 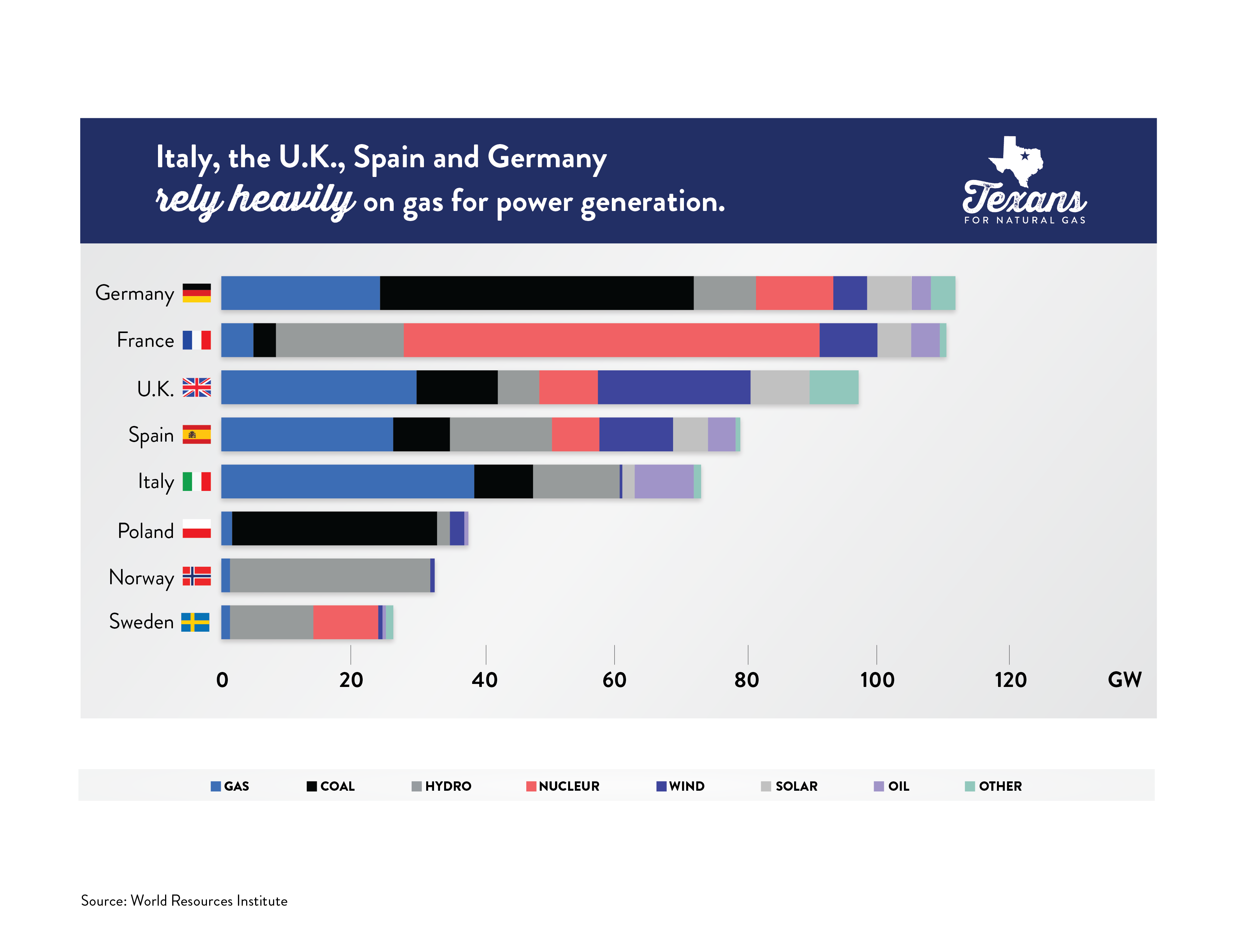 U.S. and Texas LNG exports are growing substantially and can help meet Europe’s need. Critical investments and developments have been made to LNG export facilities, particularly in Texas, which will allow the U.S. to increase its LNG exports. In recent years, Texas’ export capacity has significantly increased in large part because of new LNG terminals in Corpus Christ and Freeport. U.S. LNG exports rose from about 28 billion cubic feet (Bcf) in 2015 to 2,390 Bcf in 2020. U.S. exports are expected to continue increasing in coming years as new export capacity comes online. 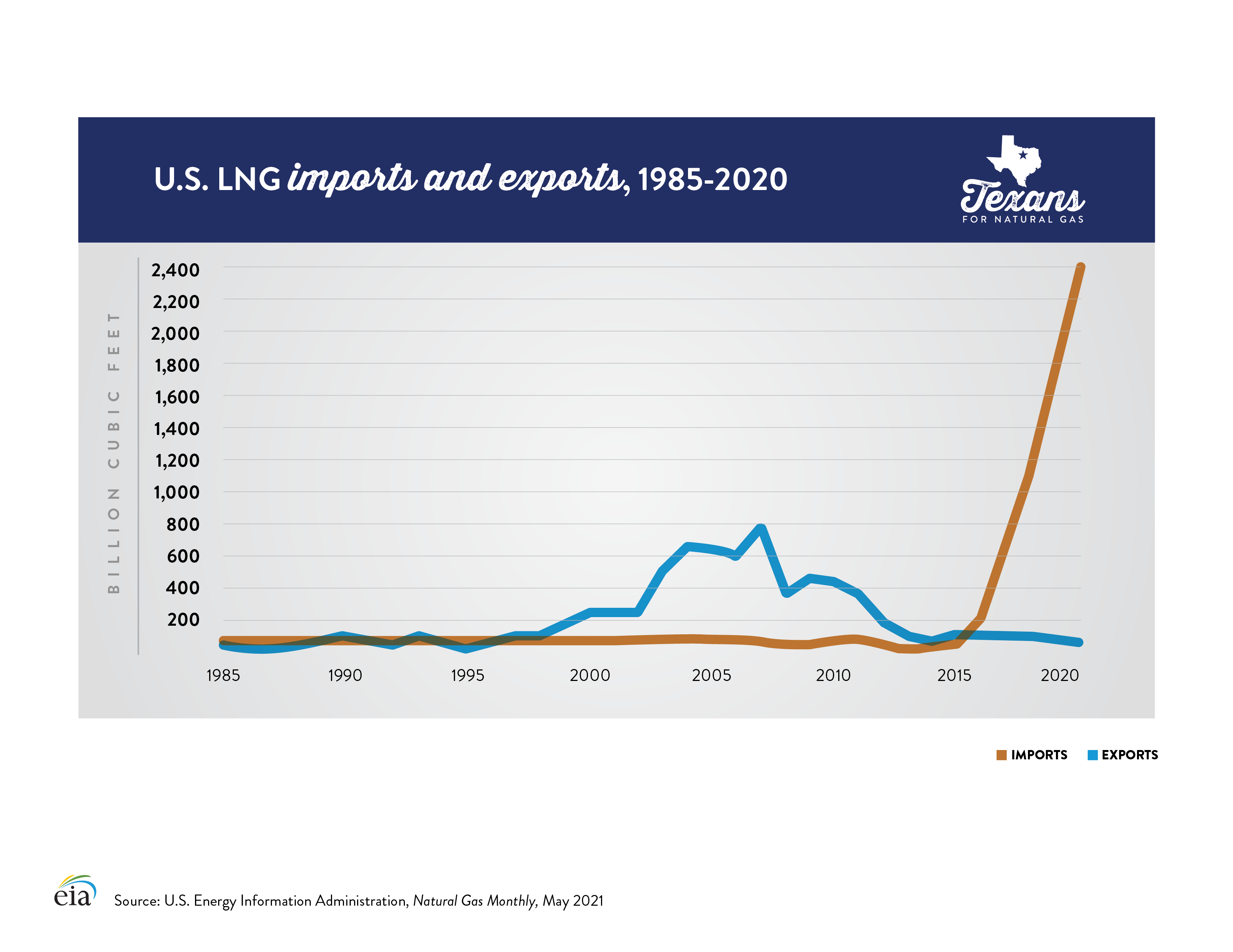 U.S. and Texas exports are expected to continue rising. In the first six months of 2021 U.S. LNG exports averaged 9.6 Bcf/d, a 42% increase compared to the same time last year. Texas’ two main export facilities located in Corpus Christi and Freeport exported nearly 40 percent of the U.S.-produced LNG in the first half of 2021. 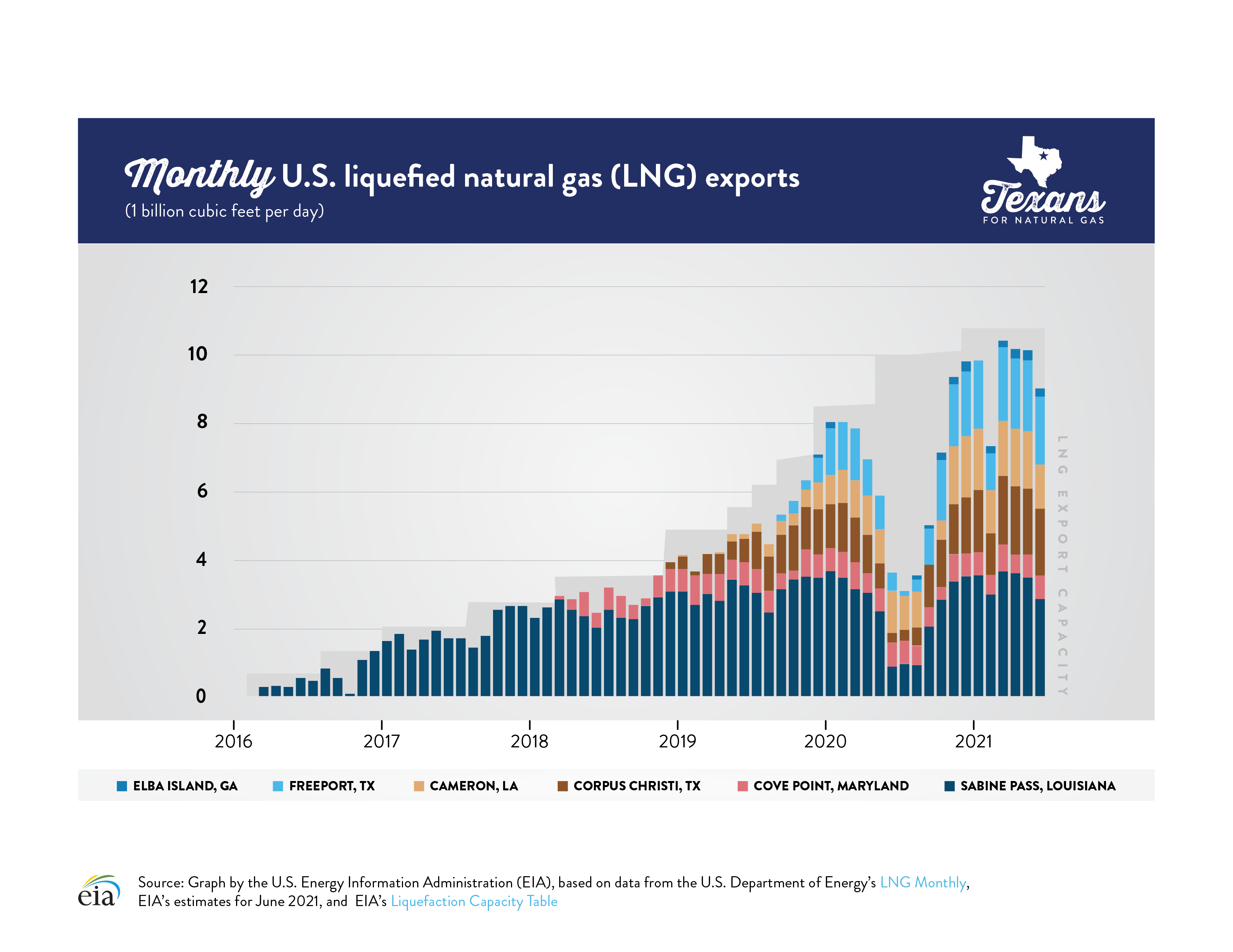 There is no easy, quick fix to the global energy crunch that’s being felt acutely in Europe. But U.S. LNG, led by production in Texas, can play a key role in alleviating future supply issues through exports that rise to meet demand.