The U.S. has a message for the rest of the world: Get ready for a lot more "freedom gas."

The country’s growing muscle as a natural gas exporter isn’t only seen by the Trump administration as an economic boon at home -- it’s also viewed as a foreign policy tool. That view was articulated Tuesday as the Department of Energy announced the approval of liquefied natural gas exports from the Freeport facility in Texas.

“Increasing export capacity from the Freeport LNG project is critical to spreading freedom gas throughout the world by giving America’s allies a diverse and affordable source of clean energy," U.S. Under Secretary of Energy Mark W. Menezes said in a statement. "More exports of U.S. LNG to the world means more U.S. jobs and more domestic economic growth and cleaner air here at home and around the globe."
Freeport LNG is one of several projects under construction in the U.S. right now as energy companies seek to capitalize on the boom in shale output by selling some of that abundant supply to overseas customers. American LNG export terminals are receiving almost 6 billion cubic feet of gas per day, according to data from BloombergNEF and ABB Ltd., equivalent to more than a 10th of domestic production. 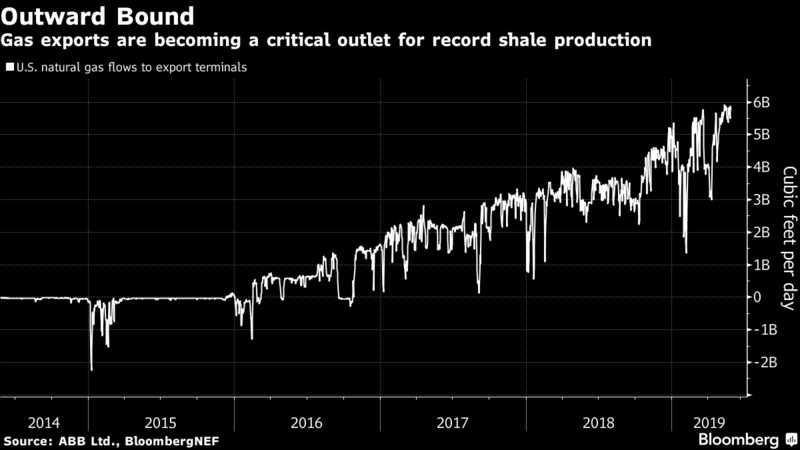 The country’s oil exports are also expanding, lifted by rising crude production in the Permian Basin of West Texas and New Mexico. That comes as sanctions squeeze supplies from Iran and Venezuela.

"I am pleased that the Department of Energy is doing what it can to promote an efficient regulatory system that allows for molecules of U.S. freedom to be exported to the world,” Assistant Secretary for Fossil Energy Steven Winberg said in the statement.

Energy exports were also touted in Corpus Christi, Texas, where U.S. officials gathered Wednesday for a ceremony celebrating a project to deepen the port to be able to handle more shipments overseas.