Here’s What’s Going on With Refining Capacity in The U.S.

As Americans have continued to experience higher energy prices, headlines have appeared pointing the finger at refineries in the United States. These articles accuse American energy producers and refiners of leveraging sky-high demand to reap profits, even as refining capacity has been pushed to its limit.

In a recent letter sent to oil majors, President Biden also pointed the finger at refineries, demanding producers increase refining capacity. In the letter, Biden claimed that “At a time of war – historically high refinery profit margins being passed directly onto American families are not acceptable.”

However, the quickness to blame oil and gas producers, and refiners, is faulty at best. There are a myriad of factors at play that have been driving energy prices, and limiting the ability of refiners to extend their capacity.

So, what is the refining process? And how does it connect to gas prices?

Petroleum refineries serve a vital role in the energy producing process, converting crude oil and other liquids into many different petroleum products that consumers use every day, from fueling their cars to heating their homes. To meet our nation’s increasing demand for these products, refineries run 24 hours a day, 365 days a year and require a large number of employees to ensure their safe and efficient operation.

The refining process is split into three main steps.

Though not part of the official refining process, storage is an essential component of a refinery’s operation. Both incoming crude oil and outgoing final products are stored temporarily in large tanks on a tank farm near the refinery.

The time in which crude oil is stored is an important piece to understanding oil prices. Producers sell crude oil to refiners at a price set by the competitive global market. Refiners purchasing the crude oil may store it for a period or sell the refined product using futures contracts. On average, there is approximately one month between purchase date and the sale date. Therefore, the price of gasoline to consumers more closely reflects the price of crude oil at the time it was purchased.

So, when the price of crude oil does not match the price of gasoline on a particular day, one cannot reasonably blame the difference on refining companies’ profits.

Over the past several years, refineries across the US have closed, and refining capacity has been strained more than ever.

Historically, Texas has led the nation in crude oil refinery capacity with 31 refineries that can process a combined total of almost 6 million barrels of crude oil per day. As of January 2021, the Lone Star state accounted for nearly one third of the nation’s total refining capacity.

Outside of Texas, several oil refineries have closed or were converted in 2020 to produce more renewable fuels. This year, U.S. refinery capacity fell to its lowest level in 8 years, from average monthly refinery inputs of 17.3 million b/d in 2019 to an average of 16.7 million b/d so far this year.

Texas is the only state to resist the trend to reduce refinery capacity, and has witnessed consistent investment in additional capacity or improved efficiencies. The newest refinery in the Unites States opened in Channelview, Texas in January 2022, slowing a year over year decline in national capacity. 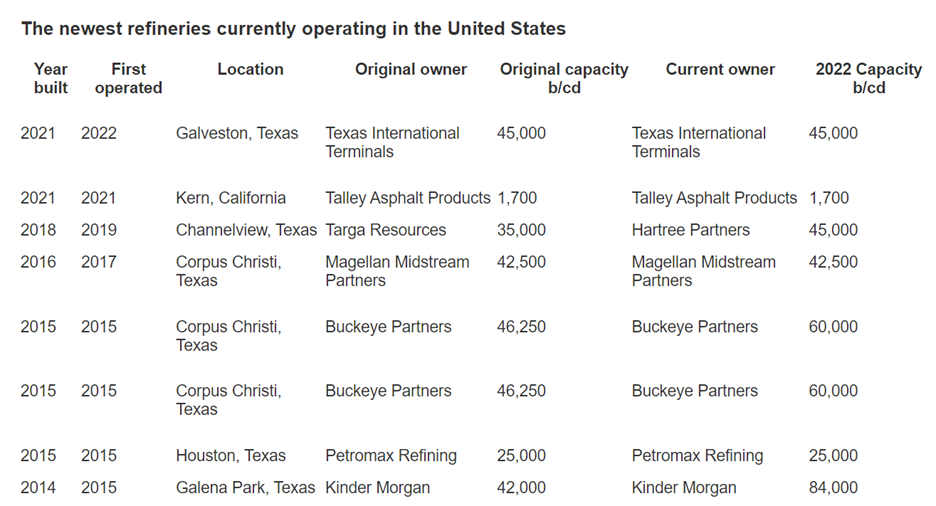 Consumers are seeing high energy prices because of pressure across the supply chain – not just because of strained refinery capacity.

Refineries are a significant process that contributes to gasoline supply and price, but it by no means the only piece in the oil and gas supply chain from production to consumption. So, while President Biden can lambast the profit margin of refineries, it is not them who ultimately determines the selling price of gas. Oil prices are based on global market prices, so any increase in crude oil prices would subsequently mean an increase in the cost of refinery products such as gasoline. Other contributing factors include an increase in consumer demand for fuel following the pandemic and low inventories of petroleum products.

The only effect refineries can have on decreasing high prices is to increase utilization. Currently, U.S. refineries are operating at utilization levels near 96 percent, which is near the upper limits of what refineries can consistently maintain. So as consumers continue to suffer high energy prices, refineries will continue to strain to reach demand levels. The EIA expects refinery utilization rates to remain near record highs through the short term.

If the Biden Administration wants to truly loosen the current choke point in the supply chain, it will need to encourage investment in expanding refining capacity.

In spite of the hurdles presented by the Biden Administration’s whiplash-like policy, Texas energy producers point out that they have invested in their refining operations to meet rising demand.  In response to Biden’s letter, ExxonMobil emphasized the tremendous investment their company has made over the last five years to increase oil and gas supplies:

“Globally, we’ve invested double what we’ve earned over the past five years -- $118 billion on new oil and gas supplies compared to net income of $55 billion. This is a reflection of the company’s long-term growth strategy, and our commitment to continuously invest to meet society’s demand for our products… Specific to refining capacity in the U.S., we’ve been investing through the downturn to increase refining capacity to process U.S. light crude by about 250,000 barrels per day – the equivalent of adding a new medium-sized refinery.”

The American Petroleum Institute, in hand with the American Fuel & Petrochemical Manufacturers, wrote a pointed response to President Biden’s letter as well, highlighting what will be needed from the Administration to support refinery growth:

“To protect and foster U.S. energy security and refining capacity, we urge to you to take steps to encourage more domestic energy production, including promoting infrastructure development, addressing escalating regulatory compliance costs, allowing all technologies to compete to reduce emissions, modernizing fuels policies, and ensuring capital markets are functioning for all participants.”

Refineries play a crucial role in the oil and gas supply chain, from production to consumption, and have been running at capacity to keep up with demand for gasoline. Without consistent investment in Texas refineries, overall capacity would be lower than it is today. Unfortunately, the Biden administration’s rhetoric can’t bring more refineries online, and if the anti-energy rhetoric continues, will only scare away investors from the prospect of new capacity to handle future demand.