LNG Exports Are Not Increasing Your Electricity Prices

As energy prices rise across the globe, consumers are finding that they’re paying more for the energy they use every day. From gasoline prices to electric bills, the trend is unmistakable. In the United States, some have been quick to identify the growing liquified natural gas (LNG) export market as a potential factor in creating those higher prices. But as you’ll see below, the data doesn’t support the theory that LNG exports are driving the high prices Americans are seeing today.

America has been increasing its LNG exports for years.

Natural gas exports of LNG and piped gas have been increasing steadily since 2016, and three years later the United States became a net energy exporter in 2019. Natural gas exports set a record high in 2021, averaging 9.7 billion cubic feet per day – a 50 percent increase from 2020, and a 310 percent increase between 2012 and 2021. Throughout this period, Henry Hub natural gas spot prices hovered around $3, with prices varying each year and not trending with the meteoric rise of LNG or long-standing piped gas exports. 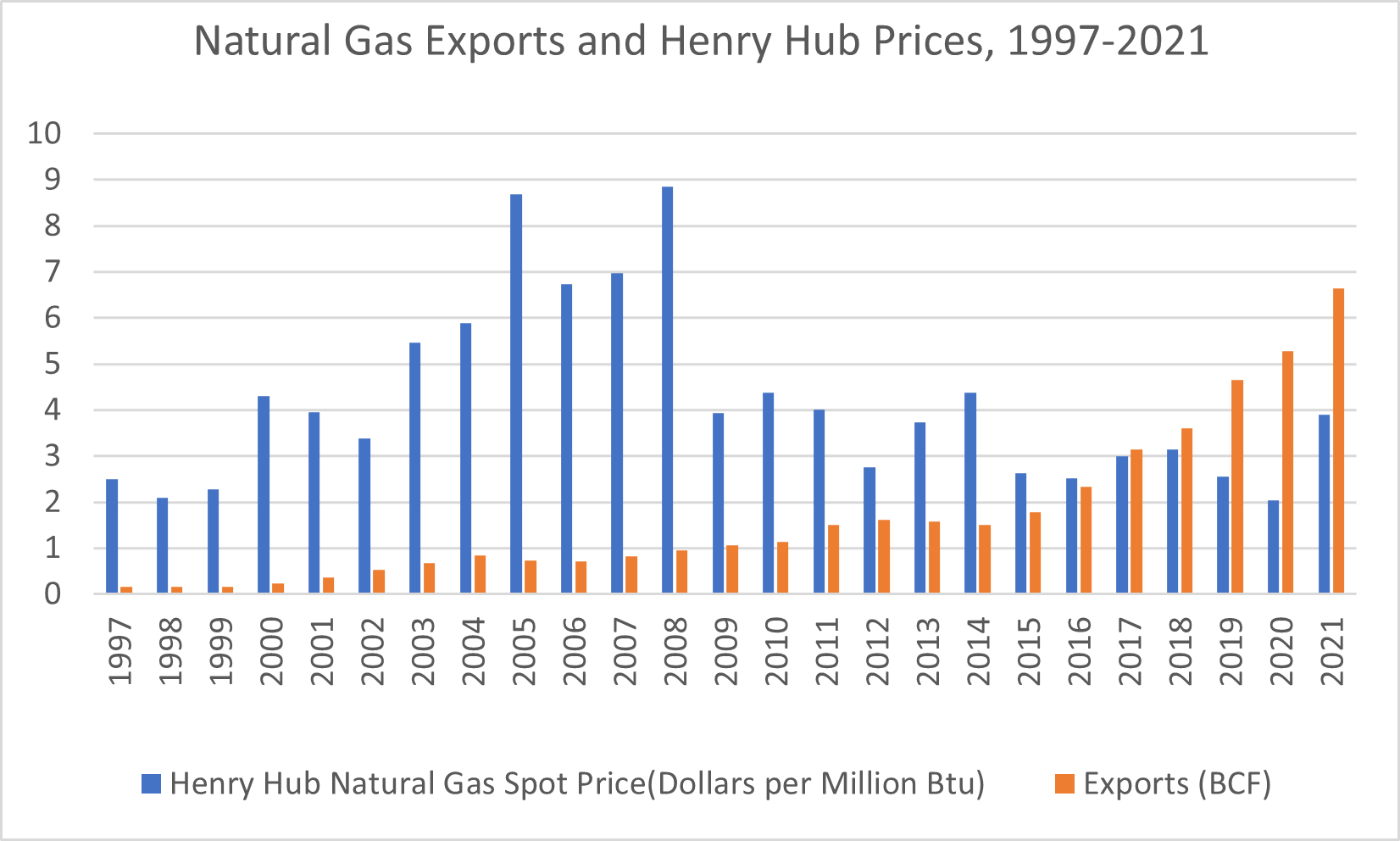 Upwards of 90 percent of produced gas is consumed in the United States, but a ban on exports wouldn’t necessarily increase supply and decrease prices in the long run. Restrictions on natural gas pipelines are a major cause for regional price increases, and any theoretical excess supply wouldn’t be able to access the areas in the most need. Some areas simply lack the infrastructure and capacity for additional natural gas supplies. 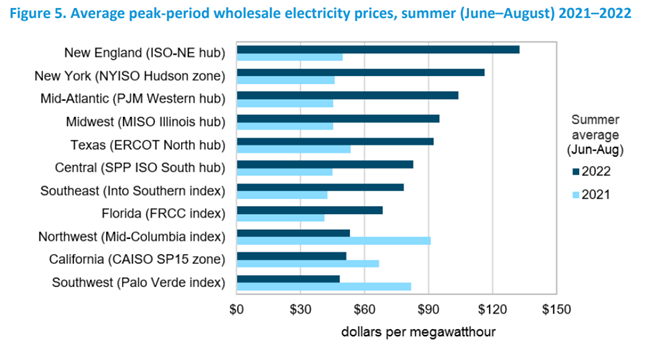 Texas and neighboring states are home to more than 200,000 miles of pipeline that efficiently move natural gas to power generators. Unlike other parts of the country, these pipes are not currently experiencing the same price crisis as the rest of the nation.

Rather, it has been the Midwest and Northeast U.S. Independent Systems Operators (ISOs) that have been sounding the alarm for months, warning that the failure to ensure natural gas supplies would increase prices and reduce reliability. Midcontinent Independent System Operator (MISO) stated shortly after its 2022-2023 Planning Resource Action energy auction in April:

“The 2020-21 OMS-MISO survey projected a small surplus for planning year 2022-23, which was eroded by an increased load forecast, less capacity entering the auction as a result of retirements, and the decreased accredited capacity of new resources.”

MISO continued that the implications of retirements and decreased capacity is profound: “The auction results indicate that MISO North/Central Regions have a slightly increased risk of needing to implement temporary controlled load sheds,” or rolling blackouts.

Just this week, the North American Electric Reliability Corporation (NERC) agreed, noting that MISO is at “high risk of energy emergencies during peak summer conditions” because of capacity shortfalls. In that same report, NERC added that drought conditions are creating “heightened reliability risk” for other regions, like California and Texas, this summer.

And in the New England area, harsh winters make natural gas pipeline constraints more pronounced, threatening system reliability and increasing the risk of emergency actions in the event of extreme weather events. During last winter’s multiple cold snaps and long periods of freezing temperatures, heating customers, who paid for the pipeline infrastructure, were served first. The remaining natural gas was then made available to electric plants. This system makes supplies for power generation vulnerable to constraints due to demand from residential customers. The transportation system providing natural gas from producing regions has run at near capacity during the peak winter months. ISO states:

“The natural gas pipelines that deliver low-cost shale gas into the region have not been expanded at a commensurate pace. Further, pipelines are built and sized to serve customers with firm contracts for capacity, typically gas utilities, not electricity generators.”

If natural gas currently cannot reach the areas seeing the largest increases in power generation prices, a sudden surplus of natural gas from any export ban wouldn’t help this summer any more than the increased supply from reduced residential consumption for heating demand.

There is a wealth of natural gas resources in the United States and production is rising to meet demand. Still, in 2021, domestic consumption failed to match production levels, continuing the production surplus trend from 2018. 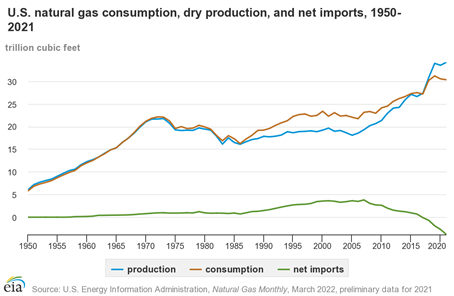 Across this three-year period, prices only saw a spike in 2021. This indicates that there are multiple other factors at play in determining prices other than exports or a lack of production.

In fact, companies are working to ramp up production to meet both domestic and international demands. According to the Dallas Fed’s oil production index, 52 percent of surveyed oil and natural gas companies reported an increase in oil production. The United States will have adequate supply to meet Europe’s long-term needs following the sanctions on Russia, and, if allowed, plenty of natural gas to keep the prices low across the nation.

Part of the anti-export rhetoric is to pretend the amount of recoverable gas in the United States is fixed, and that exports are going to take an increasing share of that reserve. But technology keeps advancing, and major advances in natural gas exploration and production technologies have increased proved reserves of natural gas every year since 2000.

Energy prices are set through a complex series of market levers. But we can begin to ensure more reliable and affordable access to energy by investing in energy infrastructure.

Through the expansion of our country’s natural gas infrastructure, we can ensure that the efforts, led by Texas operators, to respond to growing global demand are not in vain and that the increased supply can be reliably moved for domestic consumption or transport over sees. As the data demonstrates, growing exports aren’t taking away from the everyday American consumer nor increasing energy costs. Instead, our lack of transportation capacity is constraining our ability to deliver natural gas, not only to customers, but for use in critical natural gas-powered electric generation.

Building out our nation’s pipeline infrastructure is key to supporting a resilient energy transportation network. Through these investments, we can reduce our risk for disruptions and provide Americans across the country a cleaner, more affordable energy future.