Among the largest natural gas producing counties for which full data sets were available, methane emissions dropped by over 211,000 metric tons of carbon dioxide equivalent (CO2e) – a more than 51 percent decline. For the ten largest oil-producing counties, overall methane emissions decreased by nearly 39 percent, or about 109,000 metric tons CO2e. 1 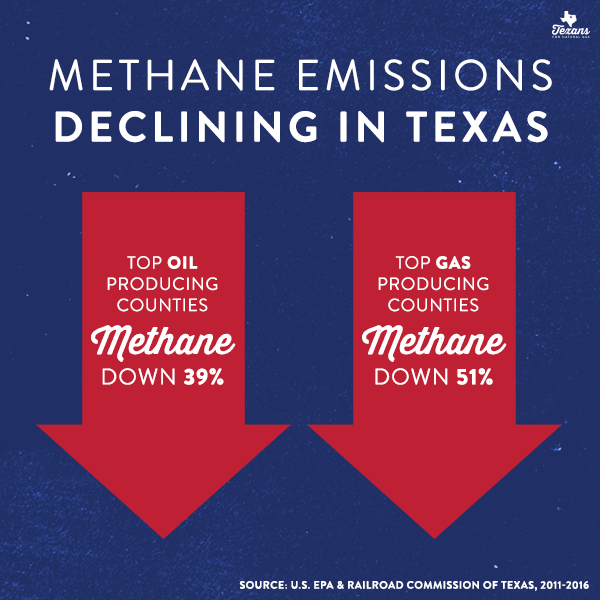 The findings come in the wake of the Trump administration’s decision to delay implementation of a costly regulation targeting methane on federal and Indian lands, which was finalized in the closing months of President Obama’s second term. The Trump administration is planning to revise the rule as part of its “energy dominance” agenda. Environmental groups have sued the administration to defend the rule, claiming energy companies are “recklessly dumping massive amounts of methane pollution into our atmosphere.”

But federal data tell a different story, not only in Texas but nationwide. According to the EPA, methane emissions from U.S. oil and natural gas production have declined by nearly 14 million metric tons CO2e since 2011.

The county-level data in the latest analysis – which show emissions primarily from compressors and other midstream facilities – are on track with broader trends in Texas’ oilfields. Methane emissions from oil and gas production in the Permian Basin, the country’s largest oil-producing region, dropped by roughly 300,000 metric tons CO2e between 2011 and 2016. The Gulf Coast Basin, which encompasses the prolific Eagle Ford Shale, also saw methane emissions decline by about 300,000 metric tons CO2e over the same period.

Methane Down, Production Up

Amazingly, methane emissions in Texas have declined as oil and gas production has skyrocketed over the past five years. Midland County, the top oil producing county in Texas, produced nearly 73 million barrels of oil in 2016, roughly a 296 percent increase since 2011. Over this same period, methane emissions from oil and gas systems in Midland County decreased by roughly 10,363 metric tons CO2e, or nearly 20 percent. Midland is also the third largest natural gas producing county in Texas. 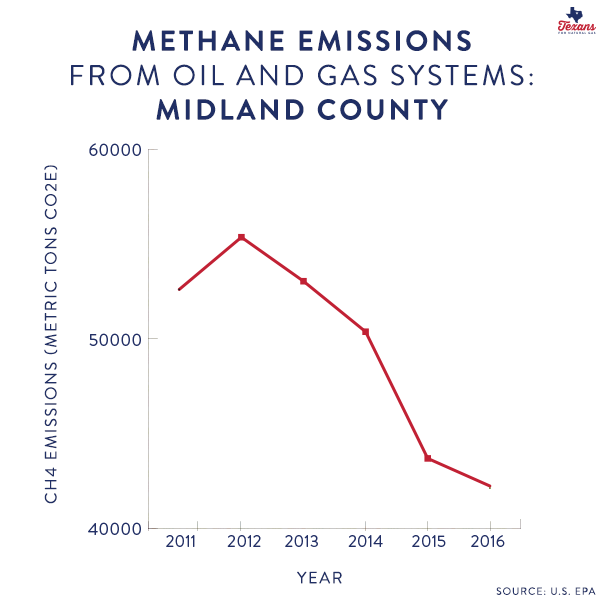 The top natural gas producing county, Webb County, experienced an even greater decline in methane emissions. Between 2011 and 2016, natural gas production in Webb County increased by 127 percent, from about 359 billion cubic feet to just over 816 billion cubic feet. Meanwhile, methane emissions in the county decreased by about 37,000 metric tons CO2e – a 97 percent decline. 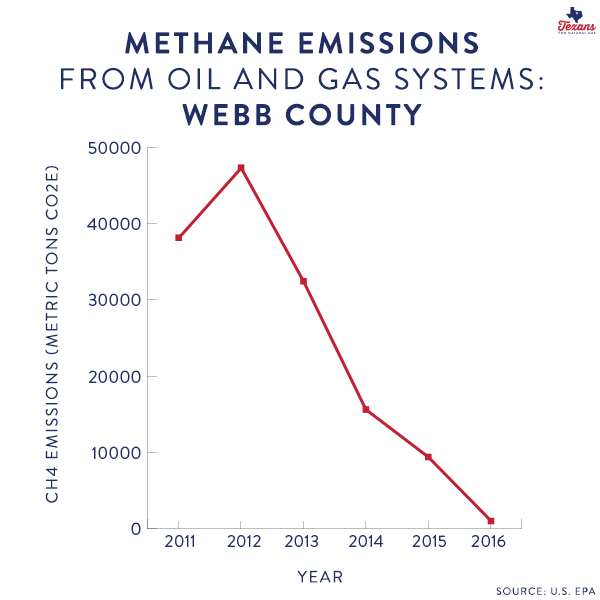 1 EPA’s GHGRP was used to obtain county-level data for the years 2011 to 2016. In some of the counties that are listed among the largest producers of oil and natural gas in Texas, EPA did not have data for all years within that range. The numbers reported here are tabulated only from counties for which there were complete data sets for all years in the specified range. This includes five of the top ten oil-producing counties, including the top two (Midland and Karnes); and seven of the top ten natural gas producing counties, including four of the top five (Webb, Tarrant, Midland, and Panola). Notably, if methane emissions in the excluded counties were incorporated into this tabulation – even with the limited data available – the overall trajectory would still be downward. See supplemental information.