Methane Emissions from Venting and Flaring Are Lower than Previously Thought

The Obama-era regulation, known as the Waste Prevention Rule, targeted two routine oilfield practices: venting and flaring. Venting refers to the controlled release of gas, which operators use to prevent pressure buildups that would otherwise pose a hazard to workers onsite. Flaring is the combustion of excess gas, and is also used for safety purposes. Flaring is also often performed to comply with air quality regulations. Delays in natural gas pipeline approvals, particularly on federal lands, have forced operators to vent or flare excess gas that could otherwise be delivered to market.

The U.S. Environmental Protection Agency (EPA) publishes data on methane emission levels every year, including from venting and flaring. Methane emissions from oil and natural gas production activities have declined since 1990, and new EPA data show emissions from venting and flaring specifically are lower than what previous EPA assessments concluded. 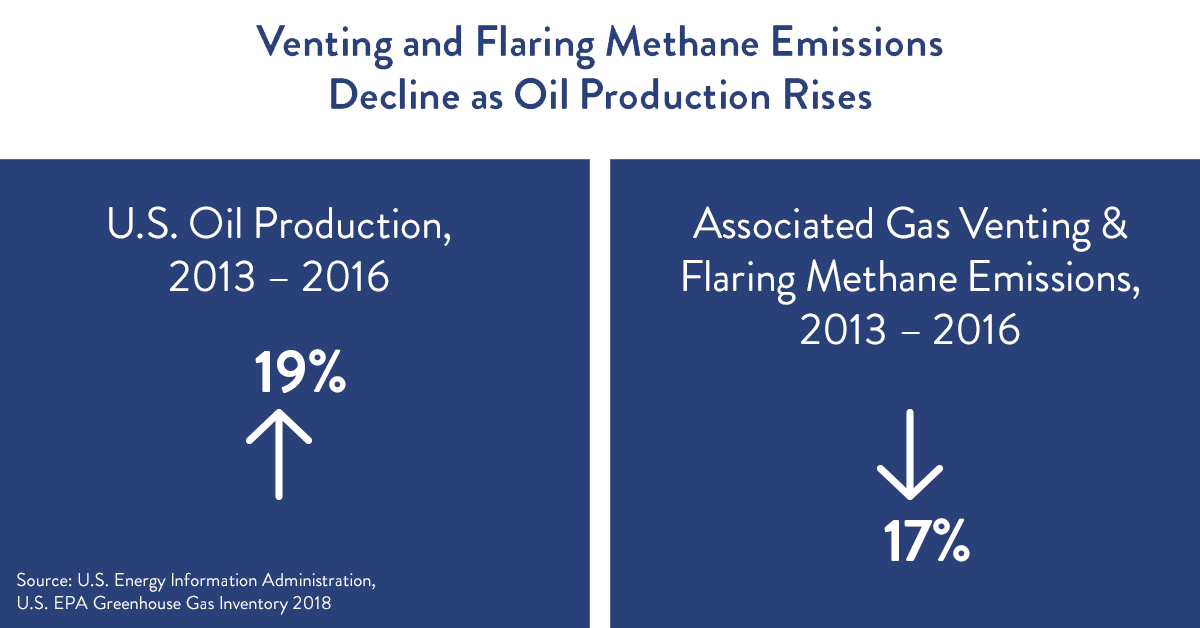 Between 2013 and 2016 – the most recent year included in the U.S. Environmental Protection Agency’s latest Greenhouse Gas Inventory (GHGI) – methane emissions from associated gas venting and flaring during petroleum production declined by 9,122 metric tons, or roughly 17 percent.

Over this same period, domestic oil production increased by 19 percent, or nearly 1.4 million barrels per day. Further, from 2013 to 2016, methane emissions from “miscellaneous production flaring” nationally declined by almost 1,000 metric tons, equivalent to an 11 percent decline.

A similar trend can be seen in natural gas production. EPA data show significant declines in methane emissions during various production processes, such as gas well completions and workovers.

For example, methane emissions from hydraulically fractured natural gas well completions – with venting and flaring – declined by 82 percent between 2013 and 2016.

The emissions data were also downwardly revised from previous years, as new methodologies allowed for more accurate estimates. This is significant because EPA data were used in crafting the Obama administration’s Waste Prevention Rule, more commonly referred to as the venting and flaring rule. As a result, these downward revisions could raise questions about the original justification for the regulation, which was finalized by the U.S. Bureau of Land Management in December 2016. 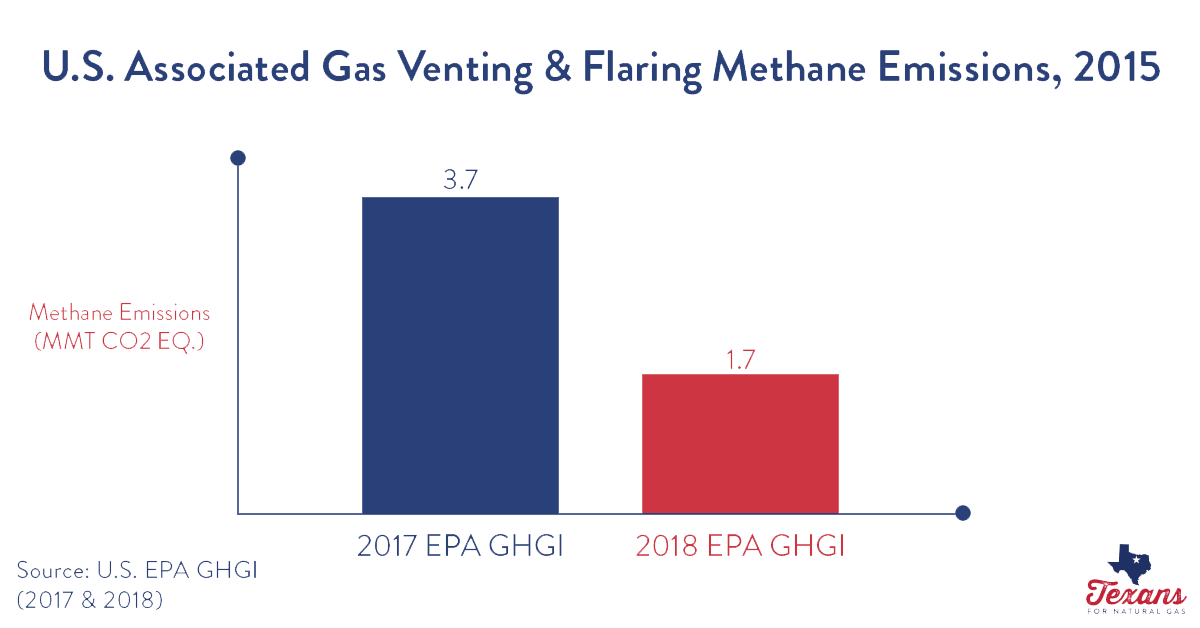 Prior years saw even larger reductions, as associated gas venting and flaring estimates for 2014, 2013, and 2012 were revised down by 73 percent, 86 percent and 93 percent respectively. 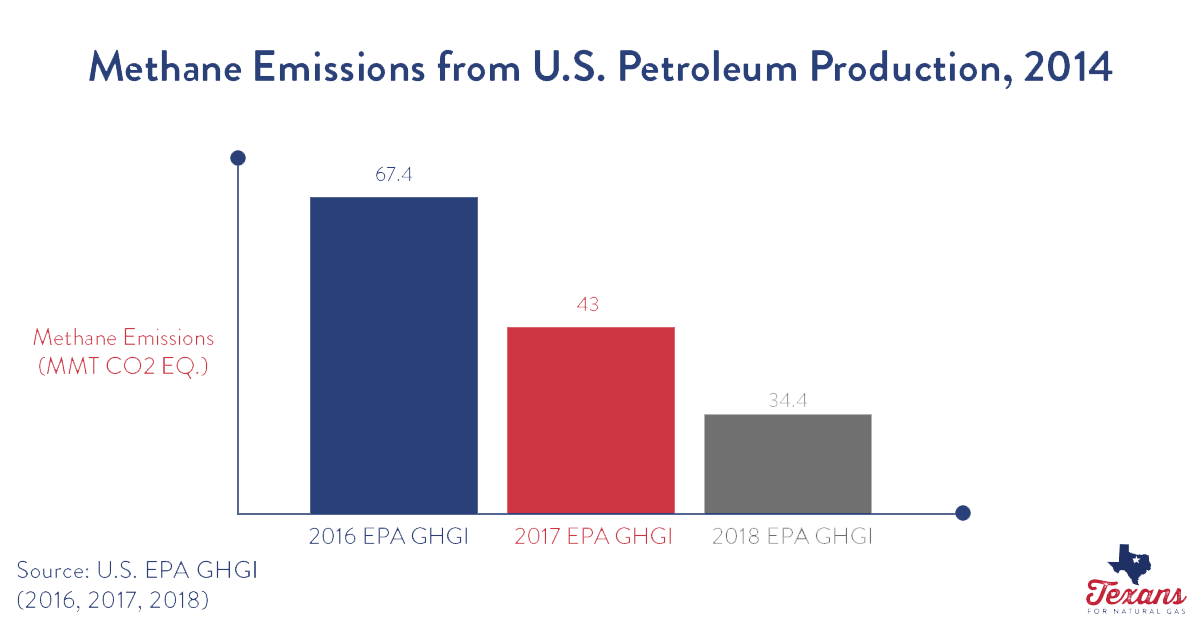 Since 1990, total methane emissions from petroleum systems have also declined, which the EPA attributed in large part to lower emissions from venting:

The Obama administration promulgated the venting and flaring rule based on older EPA data suggesting methane emissions were far higher than what current EPA estimates suggest. As BLM put it when the rule was published in the Federal Register:

As it turns out, those data may not have been conservative, and indeed could be inflated compared to current estimates. The EPA’s 2016 GHGI would have been the latest report on which the Obama administration could have relied for its rulemaking, and the data tables in the 2016 GHGI do not break out venting and flaring the same way as subsequent GHGIs. It is also worth noting that the venting and flaring rule only targets emissions on federal and Indian lands, and thus the BLM’s methane emissions calculations would only represent estimates for federal and Indian lands.

Indeed, while the methane emissions estimates in the EPA Greenhouse Gas Inventory are nationwide and include production on state and private lands, BLM specifically referenced the Greenhouse Gas Inventory as “generally representative” of what venting emissions would be on federal and Indian lands, at least for most of the individual emissions sources. In its Regulatory Impact Analysis for the venting and flaring rule, published in November 2016, BLM wrote:

The venting and flaring rule is currently stuck in a legal quagmire, although opponents of the rule have had some recent success. In April, a federal judge ruled that a temporary suspension of the rule would remain in place, and an activist-supported maneuver to revive the rule was rebuffed by a federal appeals court last month.