Study: Methane in North Texas Groundwater Is Unrelated to Fracking

Researchers at the University of Texas at Austin and the University of Michigan recently published their fifth and final study as part of a series assessing the cause of methane in water wells near natural gas development in the Barnett Shale. All five studies reached similar conclusions that “hydraulic fracturing has not affected shallow groundwater drinking sources in this area.”

The study examined samples from more than 450 water wells located across 12 counties in the Dallas-Fort Worth area, and found that 85 percent of them contained low levels of methane. 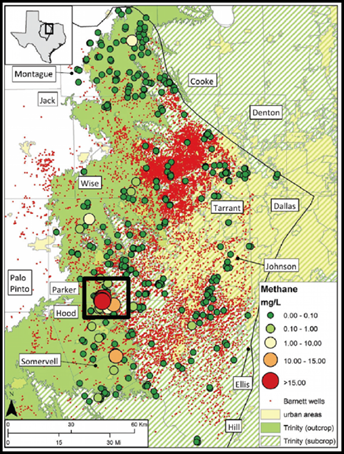 Researchers used a variety of methods comparing compositions of groundwater with those of nearby natural gas production wells, including a new process of using dissolved nitrogen the research team developed for this latest study, to determine where the methane originated. As one of the study’s authors, Dr. J.P. Nicot, explained:

“Nitrogen is another line of investigation. This team has developed a method that can be used to monitor fugitive natural gas in groundwater.”

This study is just the latest of more than two dozen scientific studies and expert assessments that have reached similar conclusions showing that oil and gas development – and more specifically fracking – is not a major threat to groundwater.

In fact, just last year The Academy of Medicine, Engineering and Science of Texas (TAMEST) released its comprehensive analysis of Texas oil and gas development, and found no evidence of groundwater contamination from fracking: “The depth separation between oil-bearing zones and drinking water-bearing zones in Texas makes direct fracturing into drinking water zones unlikely, and it has not been observed in Texas,” the TAMEST researchers concluded.

Texas is the top U.S. producer of oil and natural gas – the benefits of which are significant for local communities – and as the multitude of research continues to show, Texas can and is achieving this milestone without putting our groundwater at risk.