Move Over OPEC: U.S. Shale Influence to Grow as Global Oil Demand Set to Increase Through 2040

Oil demand is projected to increase over the next two decades, a new report from the International
Energy Agency (IEA) states, with U.S. shale production set to play an even more integral role in meeting
that global demand. IEA’s World Energy Outlook 2019 finds that while the United States is already
reaching record levels of production, U.S. shale production will continue to grow with the effect of
“reshaping global markets, trade flows and security.”

According to IEA, thanks to shale development, U.S. production is projected to account for 85 percent of
the increase in global oil production to 2030, along with 30 percent of the increase in global natural gas
production. This growth is expected to bolster America’s position as a global oil and natural gas exporter.
As Fatih Birol, IEA’s executive director told The Wall Street Journal:

“U.S. growth will limit the ability of traditional exporters to manage exports.”

Moreover, with U.S. oil estimated to reach 19 million barrels per day of production over the next decade,
American oil production is set to push down OPEC’s and Russia’s share of total oil production. As Birol
stated in the report press release:

“The shale revolution highlights that rapid change in the energy system is possible when an initial
push to develop new technologies is complemented by strong market incentives and large-scale
investment…The effects have been striking, with US shale now acting as a strong counterweight
to efforts to manage oil markets.”

This growing U.S. oil and natural gas supply will go mostly to meet demand in Asia, the report notes, with
China, India, Japan and Korea continuing to rely heavily on imported liquified natural gas (LNG).
Additionally, 80 percent of international oil trade is predicted to end up in Asia in 2040, driven a near
doubling of oil imports in India. 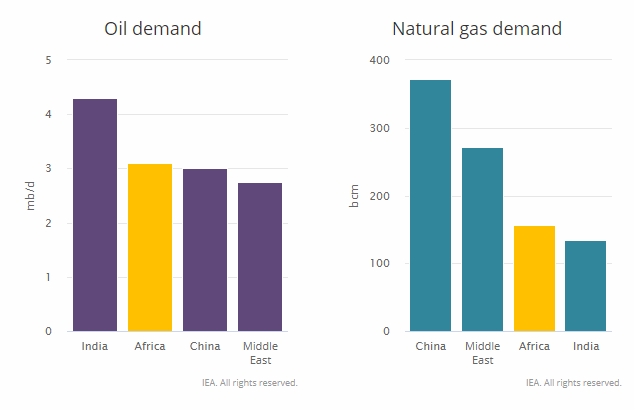 IEA’s latest Energy Outlook solidifies the fact that demand for oil and natural gas is not slowing down
anytime soon, and the United States is perfectly positioned to meet the world’s growing energy needs.