Methane emissions from oil and natural gas production have decreased by 17 percent since 1990, according to the Environmental Protection Agency (EPA)’s draft Inventory of U.S. Greenhouse Gas Emissions and Sinks: 1990-2018, which was released Wednesday.

The report found that methane emissions in the natural gas sector alone decreased by 23.8 percent, citing declines in emissions from natural gas pipelines and distribution station leaks, and improvements to transmission and storage.

Oil and natural gas operators are taking ongoing steps to reduce methane emissions, particularly from venting and flaring. Many producers have joined the World Bank’s Zero Routine Flaring by 2030 initiative, which brings together governments, oil companies, and development institutions with aim of eliminating routine flaring no later than 2030.

In hand with initiatives like these, the continued expansion of pipeline capacity and natural gas exports across the United States and Texas will aid in meeting emissions goals. As Chairman of the Texas Railroad Commission Wayne Christian has explained,

“I truly believe much of our state’s flaring will be eliminated as we expand our pipeline capacity and export infrastructure for [liquified natural gas].”

The report also revealed that the United States is successfully managing emissions, even while meeting ever-growing energy demands and drastically increasing energy production. Electric power generation reached an all-time high in 2018, yet total emissions have fallen since their 2007 peak. 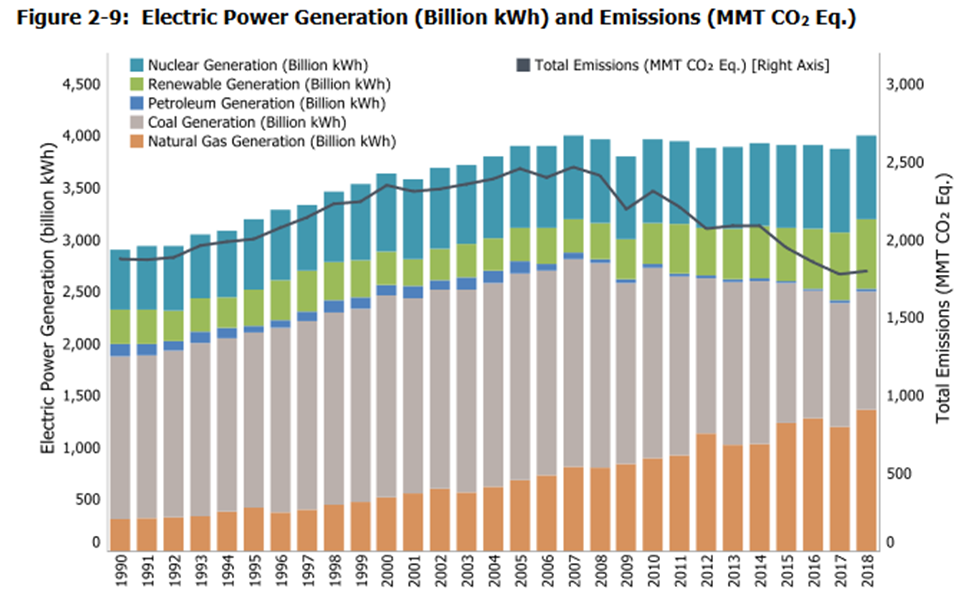 Today, natural gas use is the key driver in reducing emissions across the United States. According to a recent report from the International Energy Agency:

“The United States saw the largest decline in energy-related CO2 emissions in 2019 on a country basis …US emissions are now down almost 1 Gt from their peak in the year 2000, the largest absolute decline by any country over that period. A 15 percent reduction in the use of coal for power generation underpinned the decline in overall US emissions in 2019. Coal-fired power plants faced even stronger competition from natural gas-fired generation, with benchmark gas prices an average of 45% lower than 2018 levels. As a result, gas increased its share in electricity generation to a record high of 37 percent.” (emphasis added)

The nearly 30-year period between 1990 and 2018 witnessed the fundamental transformation of American oil and natural gas production. With the combination of hydraulically fracking and horizontal drilling, the United States has been able to break production records, hitting all-time highs of 4 billion barrels of crude oil (Bcf) produced and 37.1 Trillion Cubic Feet (Tcf) in 2018. Even while breaking these production records, overall U.S. GHG emissions have returned to their early 1990s levels. 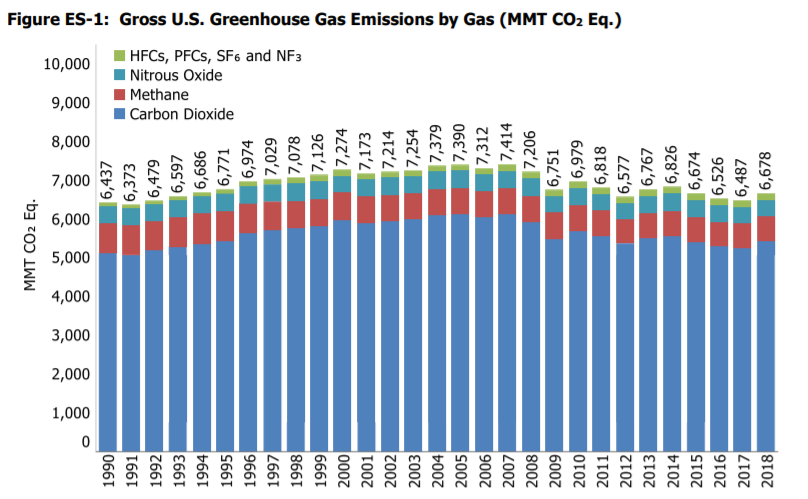 More than anything, the latest emissions figures in the EPA’s draft inventory illustrate the successful efforts of oil and natural gas producers to innovate and fold new technology into their operations in order to meet emissions goals.