From 1975 to 2015, annual LNG exports never exceeded 0.2 billion cubic feet per day. LNG exports more than doubled in 2016 to a then-record of 0.5 billion cubic feet per day. The key was putting the infrastructure in place to make higher exports possible and updating the process to review applications to export LNG to countries for which there is no free trade agreement in place.

Previously the Department of Energy reviewed applications for conditional approval in the order in which they were submitted. This led them to review some applications from projects that were never viable or close to construction, while others that had already wound their way through the necessary environmental review process waited years for their export application to be approved.

The convoluted process contributed to a lengthy export application times, which could stretch across multiple years. In February 2014, the Energy Department had a backlog of 24 export applications to non-Free Trade Agreement countries working through the review process, compared to only 6 approvals. Under the new framework, the Department has now approved 29 of these applications, although 21 are still under review due to a higher total number of applications. While the Department has made some strides, it should strive to make further progress in reducing review times.

Without LNG exports, natural gas transportation to other countries is largely confined to pipelines, which face their own capacity constraints. In addition, pipelines are geographically limited to neighboring Canada and Mexico.

The only previously active terminal in the country, Kenai LNG Terminal in Alaska, ceased operations in 2015. Fortunately, the approval and construction of new LNG terminals has substantially increased capacity and helped facilitate strong export growth.

The Sabine Pass terminal in Louisiana began service in 2016, and now has four active liquefaction units with another on the way. The Cove Point terminal in Maryland was put into service even more recently, with the first cargo of LNG shipped in March 2018. These two terminals alone increased export capacity to 3.6 billion cubic feet per day. 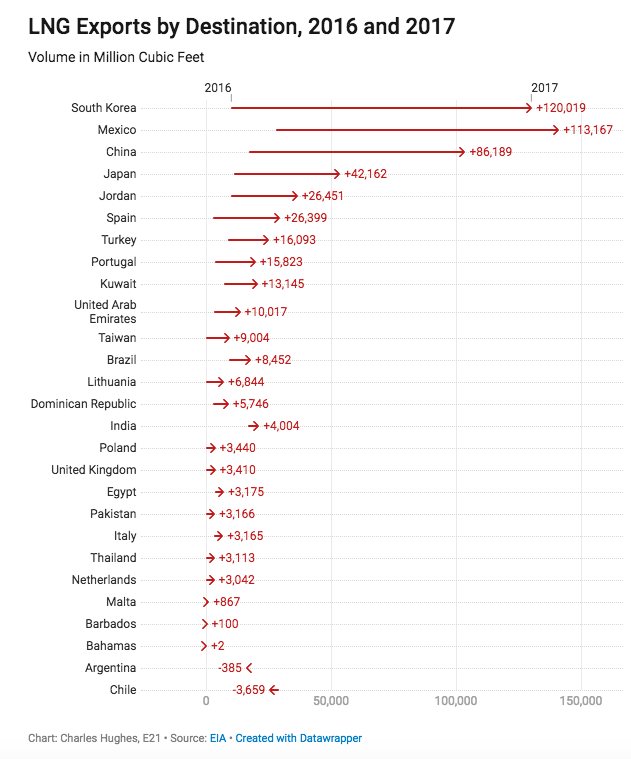 Other countries that had previously only imported a marginal amount of LNG from the United States, including Japan, Jordan, and Spain, are increasing their U.S. imports. U.S. exports to Asia, the Americas, and Europe all saw substantial growth from 2016 to 2017.

The approval for exports to non-Free Trade Agreement countries has also grown. Exports to those countries accounted for 53 percent of LNG export volume from February 2016 to March 2018.

The impressive growth last year was likely just the beginning. The Cove Point LNG terminal’s exports are not reflected in the 2017 growth, as its first cargo went out in 2018. Four additional LNG export terminals are scheduled to come into service in the coming years, and they will increase total export capacity to 9.6 billion cubic feet per day by the end of 2019. By that time, U.S. LNG export capacity will be more than six times higher than it was in latter half of 2016.

Prices, production levels, weather disruptions, and other factors will continue to be important, but U.S. infrastructure will be able to support much higher levels of exports. The Department of Energy has also reduced review times for LNG export applications due to a rule change, leading to more applications being approved. Due to these developments, the Energy Information Administration projects the United States to become the third-largest LNG exporter by 2020, after Australia and Qatar.

New LNG terminals have supported massive growth in exports, which played a role in America becoming a net natural gas exporter for the first time in six decades. LNG exports will play an increasingly important role in the years to come, and this rapid growth has only been made possible by having the necessary energy infrastructure in place.