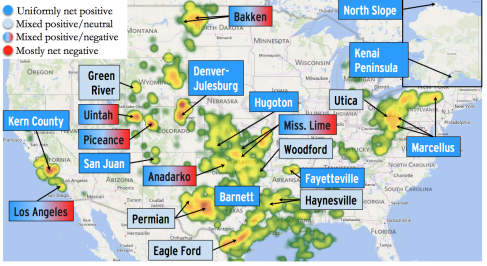 A new study from Duke University shows that shale development has been beneficial for local communities across the United States. According to the study, local governments receive revenue from oil and natural gas development through at least six types of taxes, fees, or other payments.

Focusing on 16 of the top producing oil and natural gas states, the researchers spent two years interviewing over 200 local government officials across 61 counties and 78 municipalities, as well as gathering local and state fiscal data. The researchers concluded the shale boom positively impacted a majority of local governments where development took place, including the Barnett Shale. According to the report brief:

“Our research indicates that the net impact of recent oil and gas development has been mostly positive for local public finances.”

Oil and natural gas activity contributes to local governments in various ways. The main sources of revenue from shale development are local property taxes, state severance taxes (a tax on the amount of production), and revenue from leasing on state or federal land. Some states, such as Pennsylvania, use what’s called an “impact fee” to funnel revenues to communities where development is occurring.

Additionally, the increase in population to many areas of oil and natural gas development helped boost sales tax revenue. As the researchers note:

“Population growth and economic activity associated with the industry has supported or boosted sales tax revenue for many local governments, especially municipalities.”

Much of this revenue goes to fund local school districts. As NTNG has reported, a significant portion of oil and gas revenue in Texas goes to local schools. According to the latest available data, oil and natural gas production yields about $4 billion per year to the Texas education system.

There are some costs that come with industry-driven growth, though. The researchers point to improving water and sewer infrastructure, road repair, and expanding police and emergency services to meet the needs of a larger population as the three major issues. However, in addition to using oil and gas revenue for these issues, some costs, such as road maintenance, are often mitigated by “in-kind contributions” and collaboration between operators and government to limit the impacts.

As this research shows, shale development not only provides jobs and improves energy security, but also enriches local government, allowing communities to better fund local services to improve their communities.