But the most prominent natural gas producing areas in the Metroplex show that North Texas property values increased while drilling expanded. 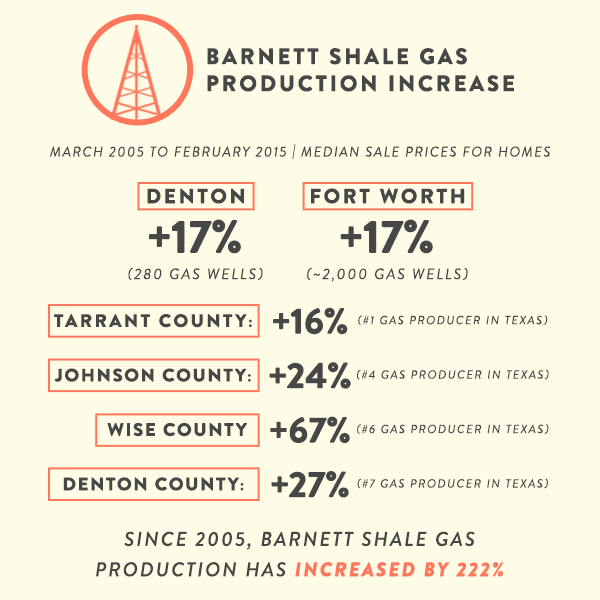 Using publicly available data from Zillow, whose home value analyses have been cited in peer-reviewed research, a new infographic from North Texans for Natural Gas shows how all four of the “core” Barnett Shale counties – Tarrant, Wise, Johnson, and Denton – registered double-digit increases in median sales prices for homes since 2005. Over the same period, sales prices increased by 17 percent in the cities of Fort Worth(home to approximately 2,000 gas wells) and Denton (280 gas wells).

Since 2005, Barnett Shale gas production increased by 222 percent, according to the Railroad Commission of Texas.

The North Texans for Natural Gas analysis corroborates what experts concluded last year about property values in the Barnett Shale. In a paper entitled “Shale Gas Development and Housing Values of a Decade: Evidence from the Barnett Shale,” researchers from the University of Pittsburgh, West Virginia University, and the U.S. Department of Agriculture found that, from 1997 to 2013, housing values in areas with Barnett Shale development appreciated more than those without any development. The researchers also found that natural gas development “expanded the local tax base by $82,000 per student, increasing school revenues and expenditures.”