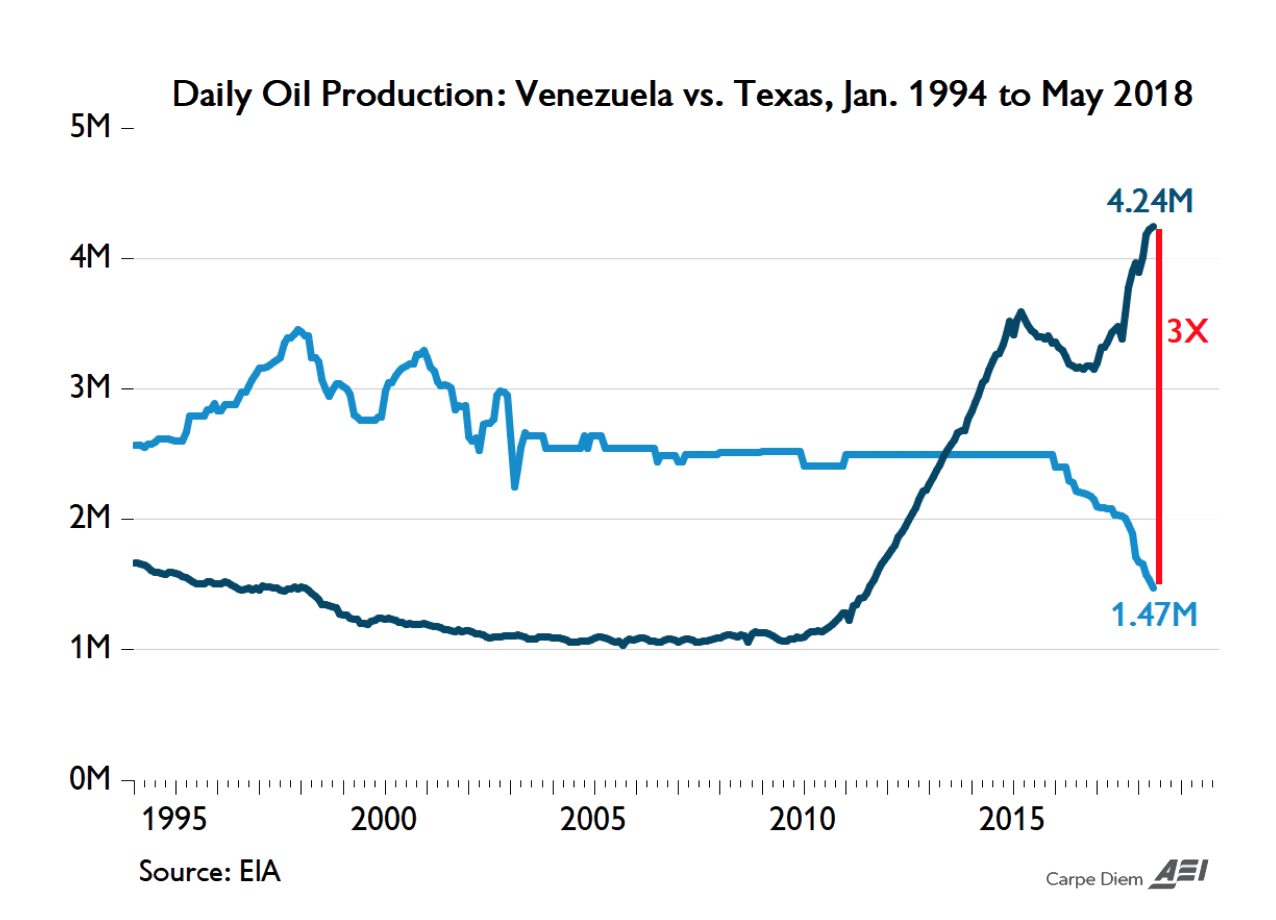 The chart above shows average daily oil production on a monthly basis from January 1994 to May 2018 in Venezuela and Texas, based on EIA data here and here. During the period between 1994 and 2011, Venezuela produced at least 1.5 times more oil than Texas, and between 1997 and 2010 Venezuela produced at least twice as much oil as the Lone Star State. But starting in mid-2013, thanks to America’s shale oil boom, Texas started out-producing Venezuela as the state’s oil output increased by a factor of four times in less than a decade. And then thanks to the economic collapse in socialist Venezuela and its neglect of investment in the country’s nationalized energy infrastructure, its oil production fell below 2 million barrels per day (bpd) in late 2017 for the first time in at least a quarter century, before falling further to below 1.5 million bpd in May of this year. Over the last year, while oil output in Texas soared by nearly 24%, production in Venezuela has dropped by more than 29%.

Remarkably, just the oil production coming out of the Permian Basin region in West Texas has exceeded Venezuela’s entire output in every month since January of last year, and now at 3.2 million bpd in May of this year is more than double Venezuela’s production of 1.47 million bpd. And a recent news report says that Venezuela’s oil output fell below 1.3 million bpd in July and may fall below the 1 million bpd by the end of 2018.

One major economic lesson from the huge contrast displayed in the chart above is the dramatic success of energy production in a capitalist country like the US that is fueled by innovation and advances in drilling technologies and characterized by private firms drilling for oil on private property with the latest cutting-edge technologies. That’s in stark contrast to the dramatic failure of energy production in socialist Venezuela, which nationalized oil production about a decade ago by seizing the assets of some of the world’s biggest oil companies including ExxonMobil, ConocoPhillips, and Chevron. And now, despite sitting on the world’s largest oil reserves, the failing socialist policies of Chavez and Maduro have crippled the country’s nationalized oil industry so badly that its infrastructure is collapsing and its oil production is in free fall.