Development in the Permian Basin is giving state coffers in Texas and New Mexico a significant boost heading into the new decade. Increased production continues to bring substantial economic gains through taxes paid by oil and natural gas companies, with record revenues generated in both states.

The Texas oil and gas development contributed more than $16 billion in state and local taxes and state royalties in fiscal year 2019, according to data released by the Texas Oil and Gas Association, a record for the Lone Star State. The billions in oil and gas taxes and royalties directly support Texas schools, teachers, roads, infrastructure and healthcare facilities.

TXOGA President Todd Staples notes the report provides a closer look at how the state uses oil and natural gas revenue to the benefit of all Texans:

“Oil and natural gas does more than fuel our cars, power our homes and businesses, form the building blocks of our everyday goods and secure our nation.  Taxes paid by the oil and natural gas industry support teachers and schools, build roads, boost essential and emergency services, improve healthcare facilities and bolster our state’s infrastructure. Since 2007, the oil and natural gas industry has paid more than $149 billion in state and local taxes and state royalties.  That’s money that benefits every Texan – whether you live near the oil patch or not,” Staples said. 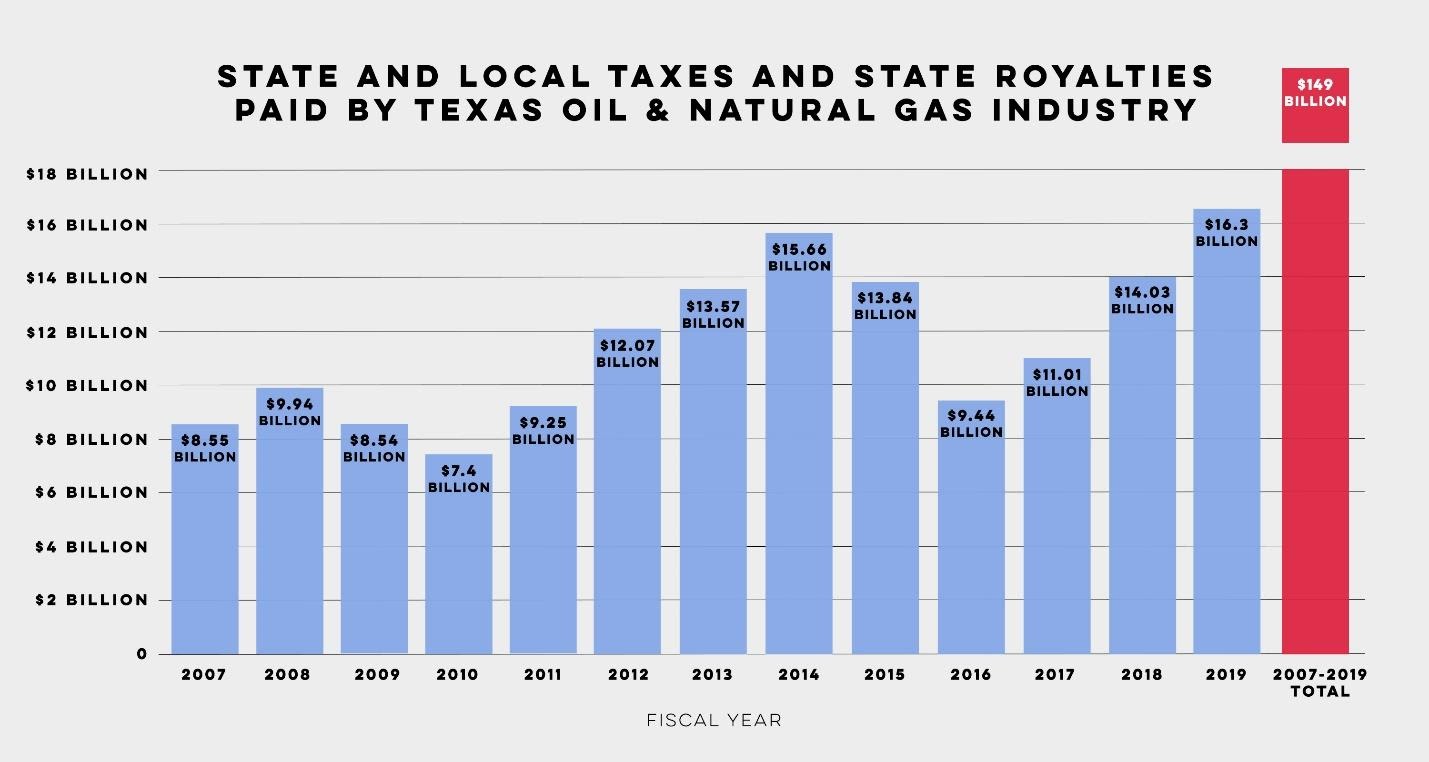 In addition to its contributions to the state’s education, the report shows oil and natural gas tax and royalty revenue is used towards funding transportation, healthcare and infrastructure through the State Highway Fund, and the Economic Stabilization Fund or “Rainy Day Fund”.

In its last session, state legislators appropriated more than $6 billion from the Rainy Day Fund – 100 percent of which is funded by oil and natural gas taxes – to fund essential programs and initiatives including:

A new report by the New Mexico Tax Research Institute shows the state’s General Fund gained $3.1 billion in oil and natural gas taxes and revenues in 2019, the first year revenue attributed to oil and gas has surpassed $3 billion. The climb in production brought an increase of more than $910 million from the previous fiscal year.

The $3.1 billion represents 39 percent of total revenue generated for the General Fund in FY 2019.

As reported in the Albuquerque Journal, the record revenue allowed for the state New Mexico to distribute nearly $1.3 billion to the state’s schools, hospitals and other programs in the new budget year. The windfall includes almost $1.06 billion for primary and secondary education, and $302 million for state universities, colleges, and other institutions of higher education.

“These funds are not only an engine to fund schools and government today, but also represent our state’s nest egg for the inevitable day when oil and gas revenues are less plentiful,” State Investment Officer Steve Moise told the Journal.

Ryan Flynn, Executive Director of the New Mexico Oil and Gas Association, touted the gains by the state made through the industry’s continued success:

“New Mexico now begins the 2020s with strengthened public schools, expanded economic opportunities, and potentially the opportunity for every New Mexico student to get a college degree tuition-free,” Flynn stated. “As a state and an industry, our future is bright. This new decade promises to offer even more opportunity for New Mexico than the past and generations of New Mexicans will develop, grow, and thrive with a strong energy sector paving the way.”