Key findings from the report:

Two of the shale regions examined were in Texas: the Eagle Ford in South Texas and two plays in the Permian, the Delaware and Midland basins. Overall, the average cost of drilling and producing from these regions dropped between $500,000 and $1.4 million per well, with the average drilling and completion cost for the five onshore regions between 25 and 30 percent below their 2012 level.

When determining the change in cost for these wells, researchers examined a myriad of factors that contribute to the total cost, including land acquisition, capital costs, lease operating expenses, processing, and transportation. As the researchers point out, much of this cost savings is thanks to improvements in well design and efficiency. According to the report, 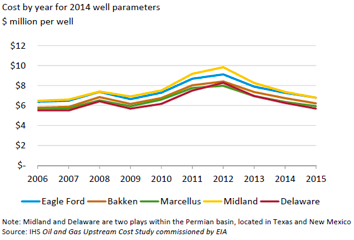 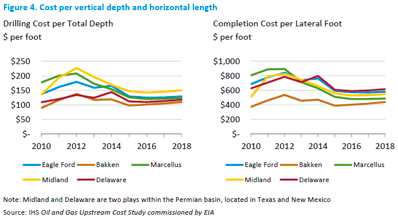 In the Permian specifically, transportation costs are anticipated to drop significantly, as low gas prices and improved infrastructure allow resources to be transported more cost effectively.

“There is substantial variability in operating expense with water disposal, long haul transport and artificial lift expenditures being the highest cost items. Given this variability, we expect some operators to make substantial improvements.” (p. 97)

With improvements in transportation, producers in the Permian could realize significant savings,

“The difference between long haul transport [such as rail] and pipeline transport could save an additional $8 per barrel and may make a large improvement to well economics going forward.” (p. 97)

As these efficiencies continue, costs are projected to decline through 2018. According to the report,

“The IHS report also expects additional efficiencies in drilling rates, lateral lengths, proppant use, multi-well pads, and a number of stages that will further drive down cost measured in terms of dollars per barrel of oil-equivalent ($/boe) by 7% to 22% over this period.” (p. 1)