The annual report details the steps that member companies have made to reduce their emissions. The Environmental Partnership has established several programs aimed at reducing methane emissions, including one focused on leak detection and repair. The annual report found that the program has resulted in more than 184,000 surveys conducted across more than 87,000 production sites.

According to the U.S. EPA’s Greenhouse Gas Reporting Program (GHGRP), the primary source of methane emissions in 2018 within the oil and gas industry was from pneumatic devices, which rely on control valves that are often powered through pneumatic controllers, which in turn release small amounts of methane into the atmosphere. By focusing on reducing leaks in pneumatic devices, operators can significantly reduce emissions. 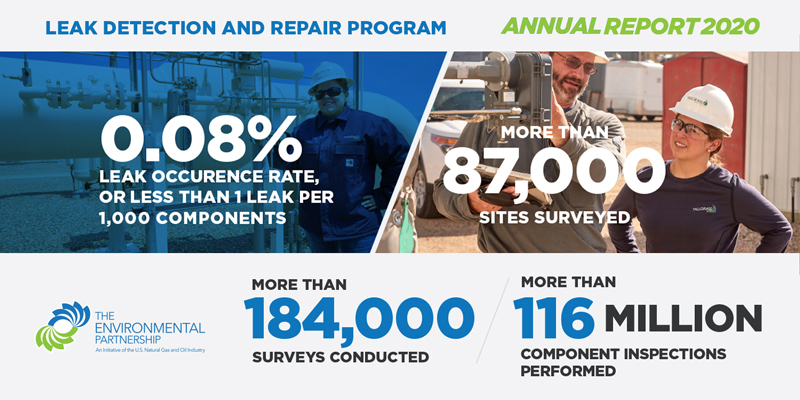 The ongoing commitment to reduce industry emissions is part of a larger trend; oil and gas companies have been reducing their methane emissions – while increasing production – for years. A recent Texans for Natural Gas analysis found that between 2011 and 2018, methane emissions intensity in the Permian Basin had declined by nearly 64 percent, even as oil production nearly tripled over the same period.

In releasing the report, API’s President, Mike Sommers, summarized the efforts of the industry:

“It’s important to note the progress that preceded us to demonstrate that continued gains are achievable. Methane emissions from five of the largest producing regions across the U.S. have fallen nearly 70 percent even as natural gas production in those regions tripled over the 2011-2018 period, demonstrating the industry’s hard work to efficiently deliver energy to consumers.”  - Mike Sommers, President and CEO, API

The Environmental Partnership program launched in 2017 and began with 26 oil and gas companies. The organization has recently expanded to include midstream companies, and now totals 83 members. Today, 32 of the top 40 U.S. natural gas producers in 2018 are participating companies, and include many notable Texas-based operators, including Apache, EOG Resources, ExxonMobil, Hunt Oil Company, and Parsley Energy.