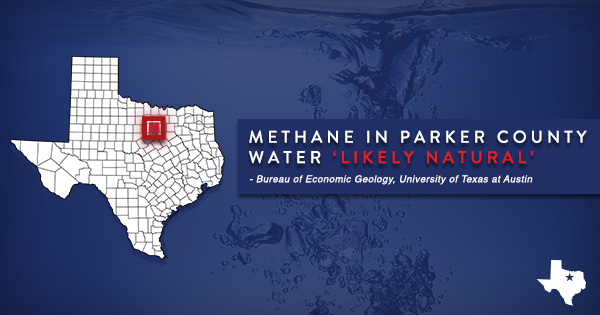 Methane found in Parker County drinking water is “likely natural” and unrelated to fracking, according to a report released late last year. The analysis, which has received little media attention, contradicts claims by environmental activists who have cited methane in Parker County wells as proof that fracking contaminates groundwater.

In the report, researchers at the University of Texas at Austin (UT) examined the presence of gas, trace metals and other compounds in several major fresh-water aquifers around Texas. Focusing specifically on freshwater wells located in shale basins, the team also sought to understand the effects of oil and natural gas development in these areas.

While the team’s analysis covers regions in several parts of Texas, the findings in Parker County – and the Barnett Shale region as a whole – confirm what we’ve known for years: methane in water wells is naturally occurring, not the result of natural gas development.

Parker County has been at the center of controversy regarding fracking for several years, beginning more than half a decade ago when a local resident distributed a video showing how he could allegedly light his water on fire. Repeated investigations by the Railroad Commission of Texas (RRC) found the methane to be naturally occurring from the Strawn formation, not the Barnett. A court also ruled that the case was based on a “deceptive video,” and the resident had hooked a hose up to a gas vent.

Researchers in the UT study appear to have affirmed the Railroad Commission’s findings, stating:

“In the Results Section we documented that (1) high methane concentrations occur clustered and (2) are likely natural.” (p. 80; emphasis added)

The authors continue, supporting the fact that the methane found in Parker County is not related to fracking activities:

“However, there is no need to invoke gas leakage to explain field observations. Structural and stratigraphic features explain the presence of thermogenic methane in shallow groundwater in the Haynesville and Barnett shale plays.” (p. 80; emphasis added)

Finally, further proof that fracking is not the cause of groundwater contamination in the Parker-Hood cluster, researchers tested for chemicals believed to be associated with oil and natural gas development. Of the samples taken from water wells in the area, no such compounds were found. As the authors mention:

Nonetheless, environmental activists have used the Parker County case as a key pillar in their pressure campaign against the U.S. Environmental Protection Agency (EPA), which released a draft groundwater report last year that found fracking has “not led to widespread, systemic impacts on drinking water resources.”

Looking at the broader Barnett Shale region, the UT researchers found little evidence of water contamination from fracking. Sampling 555 water wells in North Texas, almost 450 of which were in the Barnett, researchers found “no or very little methane” except in Parker and Hood counties, which the authors said could easily be explained by natural forces, although they do suggest additional study.

Further, the authors found no relationship between the amount of methane in groundwater and proximity to oil and natural gas wells, including Parker and Hood counties. Environmentalists have tried to prove a link between groundwater methane concentration and fracking by looking for contamination close to wells. But, as this report shows, no such relationship exists in the Barnett:

“In the Marcellus Shale, some authors have postulated that methane concentration is a function of proximity to gas wells (Osborn et al., 2011; Jackson et al., 2013) or of topography (Molofsky et al., 2013). Neither relationships holds in the Barnett…Plots displaying methane vs. distance to Barnett and non-Barnett wells in Parker, Hood, and Somervell counties (figure 62) show that the highest methane concentration are not necessarily close to gas wells, either Barnett or non-Barnett, and that there is no monotonic increasing function of methane as the sampling point approaches a gas well.” (p. 68; emphasis added)

As this study shows, methane is likely naturally occurring in North Texas groundwater, and unrelated to fracking. So while anti-fracking activists continue to make debunked claims of water contamination in the Barnett Shale, sound science clearly proves these claims are simply untrue.