A new study by the American Petroleum Institute (API) found that US Liquefied Natural Gas (LNG) produced in Texas is reducing emissions around the world. The study finds LNG used for power generation produces on average 50.5 percent fewer greenhouse gas (GHG) emissions than coal used for electric generation in China, India and Germany. 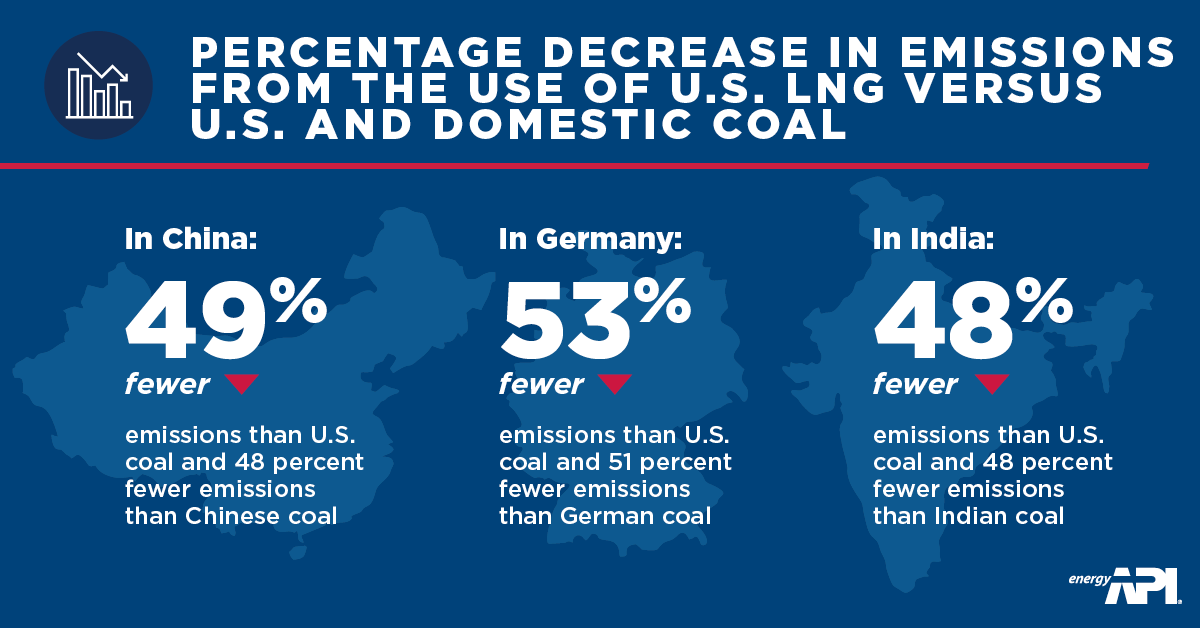 The study confirmed U.S. LNG is an affordable means to reduce emissions around the globe.

U.S. natural gas (also called shale gas) from the Permian Basin was included in the LNG life-cycle emissions scenarios for Germany and China. The complete analysis considered Permian shale gas’ complete supply chain: from production, transport via pipeline to the liquification and export facility, the destination and regasification facility, its transportation to the power plant and finally its distribution to consumers. In other words, the analysis considered the complete lifecycle of natural gas, from getting it out of the ground to delivering it to your home.

The study concluded that U.S. LNG from shale formations was in fact the lowest-emitting power source, even when considering the lengthy supply chain process:

“Transportation and shipping distance have the least impact on emissions levels in the supply chain, demonstrating that the export journey for US LNG has a limited environmental impact”.

Coal makes up the majority of China’s energy mix, and is a heavy player in the energy mix for India and Germany. In 2019, coal made up 28.2% of Germany’s energy production. The study highlighted how U.S. LNG growth will enable an energy transitions away from coal in those countries, delivering cleaner electricity at an affordable price:

“Transitioning to natural gas is a viable, affordable and realistic path for countries to continue meeting growing energy needs while slashing emissions and reducing the risks of climate change.”

Ultimately, U.S. natural gas exported as LNG is a cleaner option than coal and promises dramatic emissions reductions in key markets. In fact, many experts and international energy organizations already agree with this, including the International Energy Agency, the Center for Global Environmental Research, and the United Nations Intergovernmental Panel on Climate Change.

The United States – and Texas – are well positioned to meet rising LNG demand.

For nearly 20 years, the U.S. shale revolution, which began in Texas, has transformed the United States into an energy powerhouse. The shale revolution gave America energy security and the capacity to continue providing affordable, reliable and clean energy to our communities. Today, the United States is also well positioned to deliver this clean, affordable fuel across the globe.

According to the International Energy Agency, LNG global demand is expected to continue growing by 1.2 percent per year until 2040, which means LNG trade and infrastructure will need to come online rapidly. Not only is the United States already a major and growing global supplier of LNG, but is expected to increase its liquefaction capacity by 68 percent by 2025.

The future for Texas, and LNG, is bright. With extensive export capacity coming online in the coming years, Texas will be able to share more of its clean-burning natural gas with its trading partners, thereby delivering climate benefits to countries all around the world.