In a March 29 Facebook post that was published apparently without irony, the activists asked for money to finance their relocation to the Sunflower State, noting that they “could use some help with gas” to make the trip. They added other protesters “got stuck” and now need “some help with gas money.” 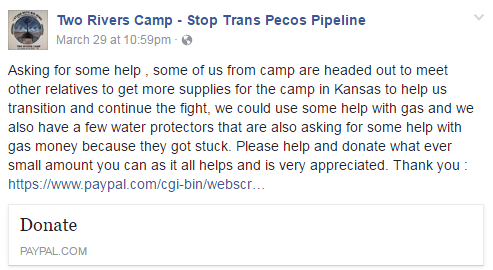 The pipeline protests in West Texas have fizzled in recent weeks, despite bold proclamations from activists in December that the camps would draw hundreds of participants. At their peak, only a few dozen ever showed up.

The Trans-Pecos Pipeline is scheduled to come online as early as today, according to a company spokeswoman.

Concerned about the impact of out of state activists and the environmental damage they caused protesting the Dakota Access pipeline in North Dakota, many Texans pushed back against the activists as their camps were being set up.

To date, nearly 500 people have signed a Texans for Natural Gas petition calling the protests “too extreme for Texas.”