The $360 million Corpus Christi Channel Improvement Project is expected to be a boon to Texas oil drillers as large oil tankers will be able to load more than 2 million barrels of crude oil at a time.

The funding came weeks after the Carlyle Group announced plans for a major crude oil export terminal on Harbor Island, near the mouth of the port. The project aims to dredge to a depth of 75 feet, large enough to accommodate fully loaded tankers, called Very Large Crude Carriers.

The terminal will be the first onshore location in the United States capable of exporting with VLCCs and would further the port's position as the preeminent global crude oil export hub, Carlyle Group said in a statement. The ship channel will also be widened more than 30 feet near the island.

"Having this Very Large Crude Cruiser access will allow more Texas oil to flow into global markets," Bud Weinstein, economist and associate director of the Maguire Energy Institute at Southern Methodist University, told UPI. "While this expansion has gone on, we're also seeing a lot of new pipelines under construction. It lowers the transportation costs and helps our comparative advantage in the world market."

The port been pushing to expand the shipping lane since 1990, but only received funding approval from the Army Corps of Engineers in the last few weeks. The goal is to get Carlyle Group's Harbor Island project built and dredged by 2021, port CEO Sean Strawbridge said.

"We're ready to go when those pipelines come in," he said. "The new lines will add 2.4 million barrels of takeaway capacity just from the Permian" oil fields.

The Army Corps of Engineers announced it will include $59 million for the project in the 2019 federal budget. It was the final piece needed to fund the large-scale dredging and widening project, Strawbridge said. 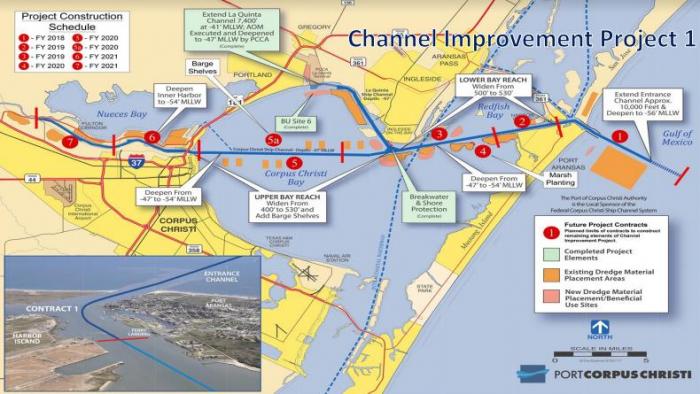 After the dredging is complete, VLCCs could travel the entire ship channel as long as they aren't fully loaded. The timing comes three years after the federal government lifted its 40-year-old ban on crude oil exports, which has sparked a flurry of capital investment in Corpus Christi.

"We could easily double that in just a couple years if some of the more bullish forecasts come true," said Jesus Barron, director of oil markets midstream and downstream for IHS Energy.

The money announcement is significant because other port projects that have been funded, like those in Savannah, Ga., and Boston, focus on container ships, which primarily carry imported consumer goods from Asia -- not oil.

"That exacerbates the trade deficit and this president has made reducing the trade deficit a top priority," Strawbridge said. "We do zero containers. [The Corpus Christi] project is about balancing trade. It's about exporting American energy to our trade partners."

The trade deficit continues to widen amid President Donald Trump's tough stance on trade with China. The deficit was $76 billion in September, up $1 billion from the month before. But having VLCCs arrive and depart in the expanded shipping lane could reduce the trade deficit by $50 billion, the Carlyle Group estimates.

"The port will work exclusively with Carlyle to bring together world-class oil producers, marketers, pipeline operators and marine terminal operators to ensure a significant portion of the new oil production in Texas will have a reliable gateway to international markets," the group said.

New pipeline infrastructure is being built to get crude from the Permian oil fields to Corpus Christi, eliminating a logjam that's pushing prices down in West Texas. Other pipelines will carry crude oil from the oil hub in Cushing, Okla., while another pipeline from Colorado will carry Bakken crude oil.

"There's a direct feed from the Permian that's heading to Corpus Christi within about a year," said Aaron Brady, executive director of the crude oil markets research team at IHS Energy. "That's really going to boost the ability of Corpus Christi to export.

"The U.S. is going from basically a zero exporter to being a bigger exporter than some OPEC countries."

The United States, however, will continue to import crude because the coastal refineries are set up to accept heavy crude from the Middle East, not the lighter Permian crude. Because of its transportation contracts, the barrels that arrive at Corpus Christi are from one oil play, not mixed with different crude types.

The lack of pipeline infrastructure right now forces crude in the Permian Basin to sell at an $8 discount to WTI, Weinstein said.

"A year from now we'll have enough takeaway capacity that that will disappear."