Thanks to Fracking, U.S. Will Be Net Natural Gas Exporter by 2017 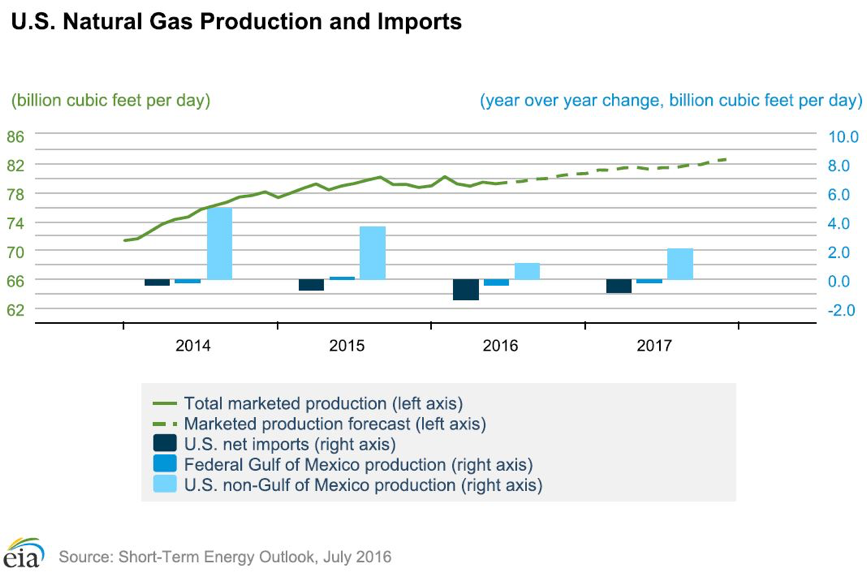 A new report from the U.S. Energy Information Administration (EIA) projects the United States will become a net exporter of natural gas by late 2017, as domestic production continues to increase.

As some might remember, the early and mid-2000s was dominated by the theory that the United States was destined to become a major natural gas importer. Along with the “Peak Oil” myth, opponents of oil and natural gas development pushed the idea that domestic natural gas resources simply could not keep up with demand. Even Time published a story on this issue, infamously headlined, “The U.S. Is Running Out of Gas”.

This all changed however, with the shale gas boom. By using horizontal drilling and fracking, companies are now able to reach a vast wealth of new resources, resulting in a massive increase in domestic production. According to the EIA, U.S. natural gas production in 2005 was about 18.9 trillion cubic feet. Since then, U.S. production has increased by more than 50 percent to nearly 28.8 trillion cubic feet.

Such a huge increase in U.S. natural gas production has meant major economic benefits for natural gas producing regions, especially Texas and the Gulf Coast. Importantly, these regions have also attracted billions of dollars in new petrochemical, liquefied natural gas (LNG), and other manufacturing projects. And, once these are completed, industrial consumption for natural gas is expected to increase. As the EIA report states:

“Forecast industrial sector consumption of natural gas increases by 2.7% in 2016 and by 1.5% in 2017, as new fertilizer and chemical projects come online.”

But even with the uptick in consumption, strong domestic natural gas production has resulted in declining natural gas imports and rising exports. According to the EIA, natural gas pipeline exports have increased this year and are expected to continue to grow, thanks in part to greater demand from Mexico. Coupled with growing exports from new LNG projects – expected to be 1.3 billion cubic feet per day in 2017 – EIA predicts natural gas imports will drop significantly as the U.S. becomes as net exporter. According to EIA’s analysis:

As this report shows, the enormous increase in domestic production has positioned the United States to help power the world with clean-burning natural gas – a development that will deliver significant benefits to Texans all across the state.