The Solution to Flaring is Building More Pipelines

A recent editorial from USA Today mischaracterizes flaring – the regulated process of burning excess natural gas during development – as a “shameful waste” and “profligate nonsense” rather than what it is: a controlled, necessary practice for safety and continued growth.

Thankfully, a number of pipeline projects are set to come online in Texas over the next few years, increasing the takeaway capacity and helping alleviate the need for flaring. Even still, the editorial argues for a number of extreme actions to be taken, including “limiting flaring” until additional pipeline infrastructure is built and burdening producers with taxes on flared gas.

Simply put, these proposed actions would cripple Texas energy production, as a limit on flaring would mean limiting oil development. Paradoxically, limiting production would ultimately result in halted pipeline construction. In other words, limiting flaring would not solve the issue long term, but would instead harm Texas oil and gas development and the economy.

Flaring is a safety measure

First and foremost, flaring is used for the safety of the men and women working in the field and at facilities. If operators did not flare, the associated gas from oil production could potentially build up in equipment and infrastructure, posing serious hazard to those working onsite and the surrounding area. As the Texas Commission on Environmental Quality (TCEQ) notes:

“Flares protect employees, residences, and resources that may be located near oil and natural gas sites by safely burning the flammable gases.”

To their credit, the editorial acknowledges this fact, stating that “flaring natural gas can be necessary where safety is concerned,” in order to limit safety risks. Still the editorial frames the practice as irrational, calling for additional regulation in order to “bring sanity to this raging bonfire.” The fact is however, flaring is highly regulated by state and federal agencies such as the Texas Railroad Commission, TCEQ and the U.S. Environmental Protection Agency. Even the EPA states that the key purpose of flaring is for safety, and to suggest it’s an unregulated and irresponsible practice is absurd:

“Flaring is appropriate for continuous, batch, and variable flow vent stream application, but the primary use is that of a safety device used to control a large volume of pollutant resulting from upset conditions.” (emphasis added)

While many of the statements made in the editorial are erroneous at best, one does ring true: there simply isn’t enough pipeline capacity today.

The editorial calls for industry “to bring sanity to this raging bonfire,” so here is the sane, rational solution: instead of stifling oil development by limiting flaring, America should focus on expanding pipeline capacity.

What’s more, building much-needed pipeline capacity in areas like the Permian Basin is already happening. Right now, there are currently six planned natural gas pipeline projects underway which would carry natural gas from the Permian Basin to export facilities. In fact, a recent review from TNG found an estimated 14 billion cubic feet per day (Bcf/d) in additional natural gas pipeline capacity in the Permian is set to come online by the end of 2022. These pipelines would have a capacity 93 times the current flaring levels reported to the Texas Railroad Commission. 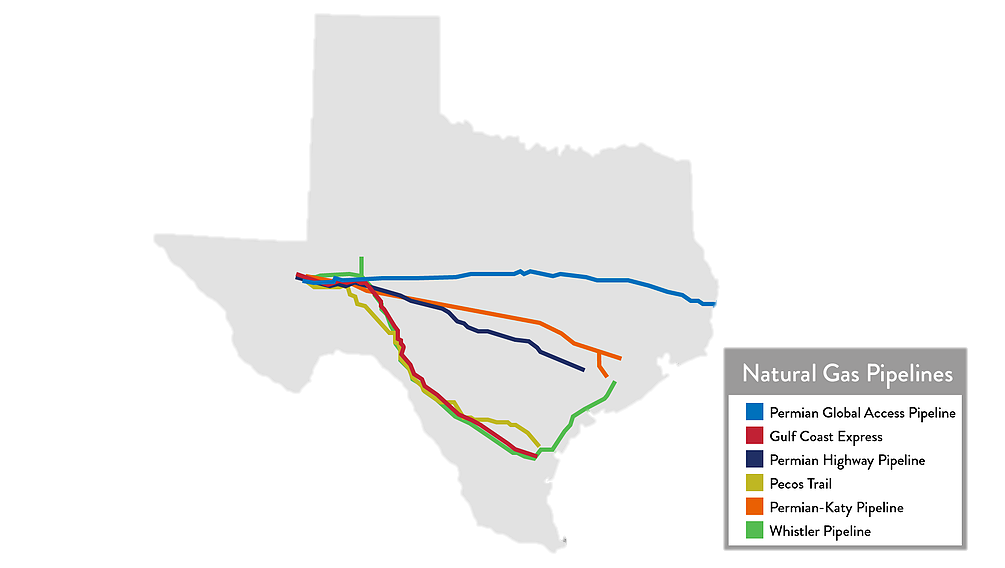 The additional capacity is also needed to meet America’s energy demand, which is projected to increase through 2050. In fact, natural gas’ share of the U.S. energy mix is supposed to increase to 37% of the total by next year.

Further, despite mentioning the number in ways in which industries like transportation and agriculture are working to reduce their climate impact, the editorial is all but silent on how natural gas has allowed the United States to greatly reduce greenhouse gas (GHG) emissions over the last several years. According to the U.S. Energy Information Administration, a significant decline in CO2 emissions can be directly attributed to natural gas:

Flaring is a necessary process undertaken as a safety measure. In contrary to restricting production, growing pipeline capacity offers a clear path to significantly reducing flaring while also growing the Texas and U.S. economy. Natural gas is a clear climate winner, enabling the United States to lower GHG emissions while still providing affordable, reliable energy for a growing population.

Want to show your support for pipelines? Sign the pledge to support Permian Basin pipelines, and encourage others to do the same!