Texas’ natural gas producers are investing in carbon capture technology here in the Lone Star State and abroad to reduce the carbon intensity of their supply chain.

Investments in carbon capture technology will be integral to meet the global demand for reduced carbon energy resources and supply nations with firm power capacity. According to the International Energy Agency’s recent World Energy Outlook, natural gas will continue to provide backup power through 2050, and the supply will have to be paired with carbon capture to ensure reduced emissions, price affordability and reliability.

EOG plans to start injecting CO2 into storage as part of the firm’s goal of reaching net-zero emissions by 2040. By next year, the company plans to launch its carbon capture pilot project, which is located in an EOG-operated area with a concentrated stream of emissions that can be aggregated to a new injection well for permanent and secure storage several thousand miles below the surface. The project is funded through the EOG’s portion of the spending budget dedicated to environmental, social and governance issues. 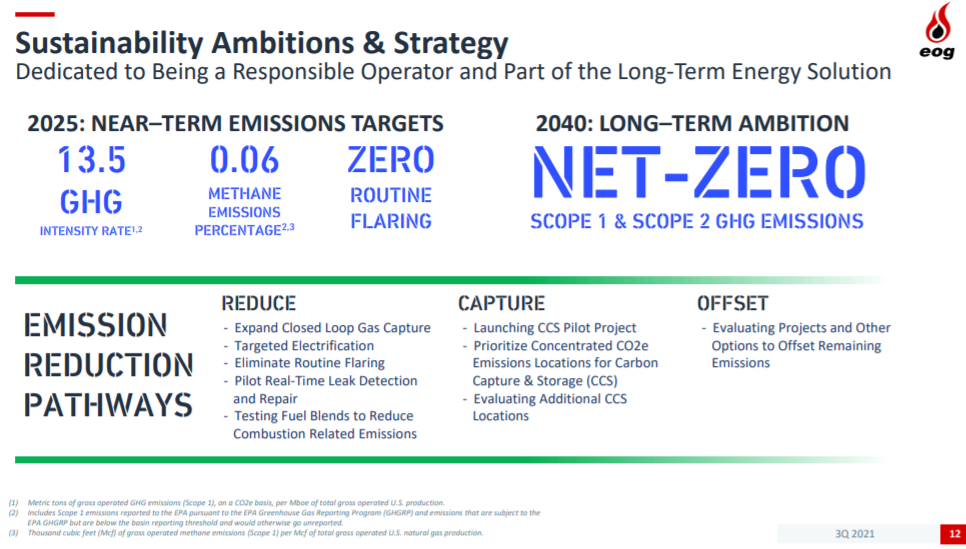 Meanwhile, Oxy is tackling the low-carbon future head-on, leveraging its 40+ years of carbon storage experience to focus on carbon management as the company moves toward its ambition to become net zero for scopes 1, 2 and 3 before 2050.  Among its first steps, Oxy is developing the world’s largest direct-air carbon capture facility in the Permian Basin, with construction expected to begin next year. Once fully built, the facility is expected to remove up to 1 million tons of CO2 a year from the atmosphere.

Oxy also is an investor in NET Power, a developer of semi-closed loop technology that produces emissions-free power and, as a by-product, pipeline-ready carbon dioxide, which can be used in Oxy’s enhanced oil recovery operations, directly sequestered underground or put to industrial use. NET Power’s pilot plant in LaPorte, Texas, recently achieved a milestone of exporting electricity to the grid.  Oxy expects that a NET Investments of this size demonstrate Texas’ role as global environmental steward, directly benefiting the state.

Exporting the success and enthusiasm for carbon capture in Texas, Oxy is also designing a “direct air capture-to-fuels” facility in Canada that is expected to capture atmospheric carbon that will be used to produce millions of gallons of ultra-low carbon fuel for the Canadian Market.

Oxy’s leading the charge for a new carbon economy in the state, preceding  the recently signed Memorandum of Understanding between energy companies that is helping the city of Houston solidify its role as the ‘Energy Capital of the world.’

Further abroad, ExxonMobil has signed a Memorandum of Understanding (MoU) with Malaysia’s PETRONAS in a bid to decarbonize the country’s upstream industry and build CCS hubs in Southeast Asia. PETRONAS Executive Vice President and CEO of Upstream Adif Zulkifi said of the project:

“This collaboration is an important step to unlock the opportunities and potential of CCS in Malaysia through applied technologies and innovation, potentially helping us reach our net zero carbon emissions aspirations amidst an evolving energy landscape.”

Carbon capture innovations in the shale patch started in Texas and continue to be spearheaded by companies who call the state home. The technology will play an increasingly important role in the world’s energy future, and investments in and outside of Texas will benefit citizens of the state and the world over.