West Texas reached a record level of natural gas pipeline exports to Mexico in May 2022 and will continue to move rising production through the state for further exports as liquified natural gas. All of that natural gas flowing south of the border demonstrates the growing flow of energy from the Permian Basin to immediate and distant allies through pipeline development meant to capture West Texas’ abundant oil and gas.

West Texas pipeline exports to Mexico have been steadily increasing since 2019, reaching their May high of 1.6 billion cubic feet per day (bcf/d). The year over year increase is in part due to pipeline capacity growing more than 1 bcf/d since 2019 as more connecting pipelines in Central and Southwest Mexico have been place in service, according to the U.S. Energy Information Agency.

U.S. natural gas exports from West Texas in the first five months of the year increased 12 percent compared to 2021. This surge in volume was absorbed by the Wahalajara and Samalayuca-Sásabe pipeline systems – the Wahalajara system delivered Texas natural gas through the Waha Hub in West Texas to Guadalajara, Mexico’ second largest city, and other population centers in West-Central Mexico, and the Samalayuca-Sásabe pipeline increased capacity on the existing San Isidro-Samalayuca pipeline system in northwest Mexico which accounted for one-third of West Texas’s 2021 exports. 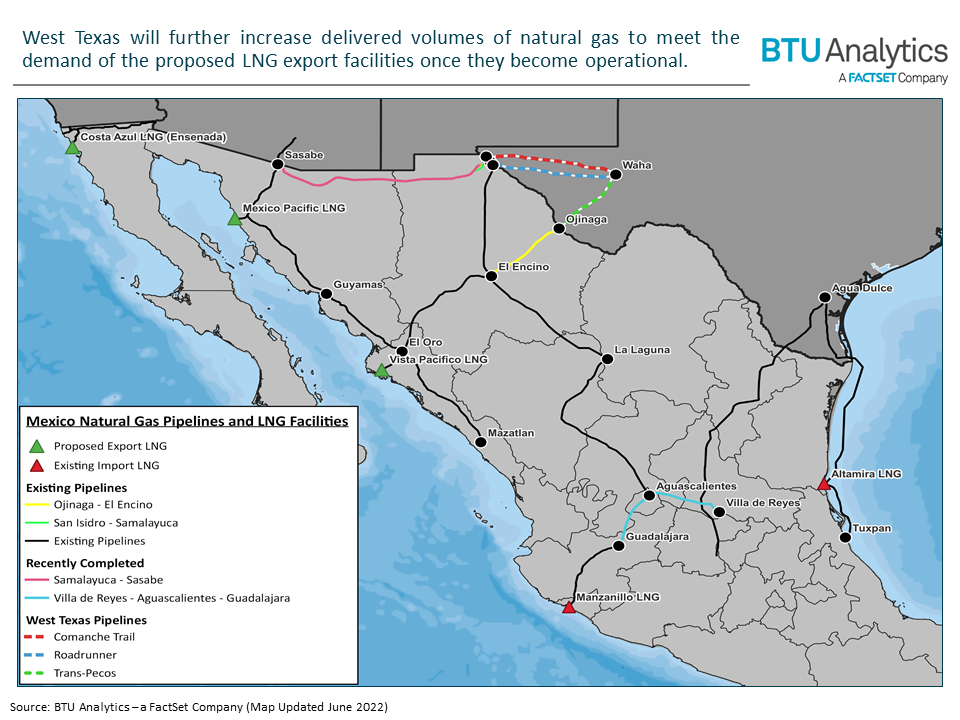 The growth in pipeline capacity has allowed more West Texas natural gas to support Mexico’s growing energy needs. Natural gas accounts for 65 percent of Mexico’s total electricity generation and additional natural gas plants are projected to be completed through 2029. Officials predict that  “the development of electric power capacity… will continue being based predominantly around the use of natural gas,” as the country gradually integrates renewables.

Even as Mexico increases domestic natural gas production, West Texas’s Permian Basin will continue to complement their resources by ensuring a reliable energy supply for the country and by moving excess capacity from the Permian across Texas through pipelines bound for liquefaction facilities that produce liquified natural gas for global exports. Four new natural gas projects were recently announced that will drastically increase takeaway capacity, and several companies have announced plans to expand existing capacity. These projects will increase takeaway capacity by 4.12 bcf/d in order to meet the projected 3.7 bcf/d production increase in the Permian basin by 2024.

The increased takeaway capacity is necessary to support the growing demand for American energy resources in the face of hostile energy policies and an ongoing global energy crisis. West Texas energy will support nations in Europe and Asia trying to diversify energy resources away from Russian imports over the next few years and meet the Biden Administration’s goal to support allies abroad with American energy. By confirming increased investment in U.S. LNG, the expansion projects are market fears with certainty that Texas resources will be able to satisfy future demand.

West Texas’ export future is bright, satisfying energy demands of neighbors and countries across the world. Rising production and infrastructure projects will ensure that gas from the Permian continues to flow and meet energy needs at home and abroad.