What Is the Strategic Petroleum Reserve?

The Strategic Petroleum Reserve (SPR) has been mentioned in national news stories during the past months as gasoline prices reached record levels, but what exactly is it – and can it help lower gasoline prices?

First discussed in 1944 by then-Secretary of the Interior Harold Ickes, the SPR was created in 1975 when President Ford signed the Energy Policy & Conservation Act to protect consumers from extreme gasoline price increases due to a sudden change in oil imports. To stabilize prices, the SPR would release oil from four deep underground storage caverns in Texas and Louisiana to increase oil supply. In theory, the reserve could help stabilize prices from any sudden change in oil imports due to a war or a natural disaster. 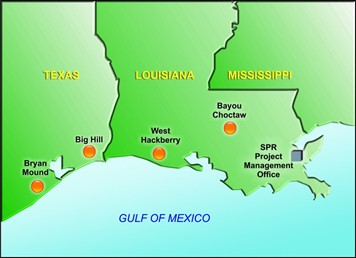 What led to the SPR being created?

In response to America’s support for Israel during the 1973 Arab-Israeli war, the Organization of Arab Exporting Countries placed an embargo on the United States, the Netherlands and Canada, and reduced crude oil production. This caused U.S. oil prices to increase from $4/barrel to $12.50/barrel in one year, which sent gas prices skyrocketing. In response to the embargo, Congress authorized the Energy Policy & Conservation Act of 1975 to store oil for release should prices drastically increase in the future. Initially, the SPR held oil equivalent to 90 days of imports or 500 million barrels. Today, the SPR can hold up to 1 billion barrels of oil after being expanded by the Energy Policy Act of 2005. Despite that additional capacity, the SPR has never held more than 726.6 million barrels.

When has the SPR been used?

Since its inception, the SPR has been used for emergency releases, test sales, exchange agreements with private companies, and non-emergency sales. Notably, it had only been used three times for emergency releases to address supply disruptions prior to the Biden administration: during the Persian Gulf War in 1991, Hurricane Katrina in 2005, and as a coordinated release by the International Energy Agency in 2011 in response to supply disruptions in Libya. The Biden administration has authorized three emergency releases since November 2021 to address rising prices as a result of the COVID-19 pandemic and the Russo-Ukrainian War.

Following this unprecedented release, experts expected gasoline prices to decrease between 10-20 cents per gallon on average. But while Texans have seen roughly a 17-cent drop in prices at the pump to date, President Biden’s use of the SPR has raised serious questions about long-term price relief, energy security, and the role of American and Texan energy production.

A short-term fix to a long-term issue.

If the energy market remains the same over the next three months, it is unlikely the SPR release will have a long-term effect on gasoline prices. But with the war in Ukraine approaching two months with no end in sight, the energy market will likely continue to be stressed as countries see the effects of decreasing Russian energy imports.

And historically, SPR releases have had very short-term, insignificant impacts on prices.

Limited supplies may only get tighter if the European Union passes bans on Russian oil and natural gas. But it isn’t just global conditions that have kept prices high for Texans. While many support paying a few cents more at the pump to support our global allies, domestic policies that have hamstrung U.S. production are only hurting our country.

Since entering office, President Biden has been vocal about canceling critical infrastructure projects like the Keystone XL pipeline and decreasing oil and natural gas production. Even after banning drilling on public lands, which was ruled illegal by a federal judge in June of 2021, the administration is just now restarting lease sales with less land available and higher royalty rates. This is a step in the right direction, but the energy industry’s ability to develop new leases is still limited.

In November, the Energy Information Administration’s acting Chief Stephen Nally testified before Congress that “Ultimately the amount of impact would be relatively short-lived, and would depend on how much was released."

This has been proven true with previous releases. CNN analyzed the impacts of President Obama’s emergency release:

“Last June 8, a similar signal by White House Press Secretary Jay Carney that an SPR release was being considered sent oil futures down 9% and gas prices down 3% during the two weeks before the release was announced formally.

“Following the June 23 SPR release announcement, pump prices dropped another 2%. But they stayed down for just over two weeks, the time it took for the Department of Energy to sell the oil for about $105 a barrel.”

The SPR serves a strategic purpose to bolster energy security and as a last line of defense to temporarily and modestly reduce energy prices. But the truth is, our current situation calls for a much more robust response that unlocks Texas’s energy potential.

There are also long-term concerns about replenishing the SPR, which has not been replenished since 2009, and which took five years to fill roughly 150 million barrels. Because Biden’s recent orders call for the release of about one-third of the SPR, if a natural disaster or another global energy event were to occur, our ability to utilize the SPR again has been greatly reduced and would push our inventory to low levels.

To decrease energy prices long-term, providing consumers relief at the pump and establishing energy security and independence for Texas, America, and our allies abroad, we must enable domestic energy production.

Texas has a critical role to play today when it comes to domestic production and U.S. energy security. As the largest oil and gas producing state in the country, the Lone Star State not only leads the country in energy production, we can do it to the highest of standards, showing Texas energy production is the best in the world.

But Texas and the oil and gas industry can only do so much on their own. We need supportive government policies that not only enable natural gas production but enable critical infrastructure such as pipelines and liquid natural gas export terminals to deliver energy across the globe. Like the Independent Petroleum Association of America noted in a recent press release, the SPR should not be used to manipulate the crude oil market or product markets. Instead, a better solution is to enhance, not stifle or shut down, America’s leadership in natural gas and oil production.