What the EIA’s Short-Term Energy Outlook Means for Texas

The report also recognized that renewable resources will increase their share of power generation, making it clear that firm, reliable power from natural gas will be more necessary than ever to maintain reliability. In combination with these identified trends, the Russia-Ukraine war, and the economy bouncing back after the Covid-19 pandemic, the United States energy sector is in a serious state of flux.

So, what does all of this mean for Texas energy?

Unsurprisingly, some of the most notable trends identified in the report involved natural gas. According to the EIA, U.S. natural gas exports are expected to increase in 2023, stemming largely from the nation’s further projected growth in LNG exports and demand from regions like Europe, which had previously relied on Russia for its energy.

In 2022, the U.S. natural gas trade sector experienced a variety of changes that influenced output both positively and negatively. This included factors such as facilities operating near maximum capacity and a fire at the Freeport LNG facility that reduced exports by 2.0 billion cubic feet of product per day (Bcf/d). Overall, the EIA report forecasted a stronger upcoming year for the natural gas industry. According to the Freeport facility, operations will kick back up in the second half of January 2023 and have an operating capacity comparable to former output levels by March. Additionally, to meet the high demand for natural gas in Europe and Asia, U.S. facilities will continue to operate near maximum capacity. Combine these factors, and the EIA expects U.S. LNG exports, most of which comes from Texas, to break new records by March 2023.

U.S. Natural gas production will continue to climb, and is being driven by Permian production.

Expansion projects to increase pipeline infrastructure also played a major role in increasing the U.S. production of natural gas. As such, it is important for lawmakers and regulators to support expanding the U.S. pipeline system to keep on track with progress. The EIA recognized this notion, stating, “The pace at which these projects are completed is a notable uncertainty in our forecast, and delays could result in lower production than we expect.” Without adequate takeaway capacity, such as new pipelines, producers cannot safely increase production to meet rising demand. 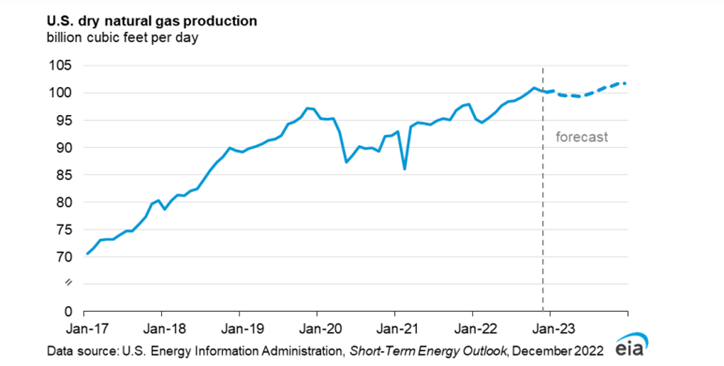 Energy prices in the winter are high – particularly in the Northeast - due to inadequate energy infrastructure.

The short-term energy outlook report recognized the rising costs of winter electricity prices, particularly in the New England and New York areas. “On-peak wholesale power prices will average more than $200 per megawatthour in January, up 35% from January 2022,” according to the report. As a result, the region’s on average upcoming surge in wholesale electricity prices will be significantly higher than the rest of the nation, particularly Texas, which is projected to have the least increase of any region. 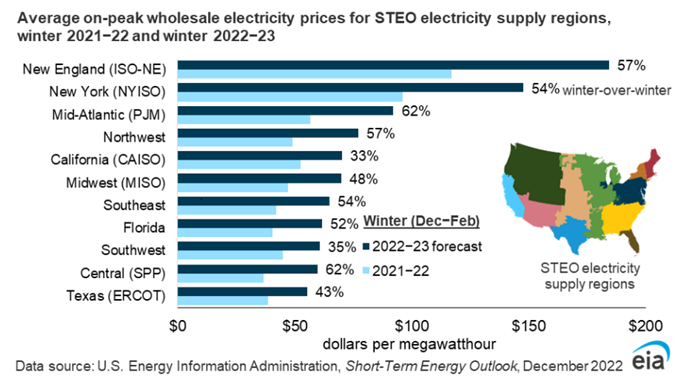 High electricity prices are also tied to the need for pipeline infrastructure to ensure the United States can achieve its energy security goals. In the case of rising electricity prices in the Northeast and New England regions, lack of adequate natural gas delivery systems are leading to the adoption of more costly alternatives such as imported LNG or fuel oil to meet demand. In these scenarios, because of fuel adjustment clauses, expensive costs are passed on to customers in the form of higher bills. To address this, the area needs to invest in pipeline infrastructure to increase access to cheaper fuels that minimize surges in costs.

Renewable energy is growing, but will need natural gas to provide reliable energy.

Renewable energy’s increased role in the U.S. electric generation mix was also a noted trend in the EIA short-term energy outlook. Specifically, the report projects that renewable power will increase its share of electric generation. Wind and solar power-derived electricity will increase from 14 percent in 2022 to 16 percent in 2023, while natural gas is estimated to drop from 39 percent to 37 percent. But because renewable power is intermittetant, meaning those resources do not generate energy while the sun is not shining or the wind is not blowing, we must continue to expand investments in reliable resources like natural gas, which can produce energy as needed.

The EIA’s short-term energy outlook identified many trends that it anticipates will emerge in the U.S. energy sector. A clear point indicated throughout the report is the vital role natural gas will continue to play in powering the nation. As a result, natural gas production and LNG exports will continue to increase to meet rising demand. Expanding the current pipeline infrastructure is key to ensuring the United States can efficiently provide needed resources. This reason alone is a major cause of the Northeast and New England regions’ extreme wholesale electricity prices. Additional pipeline infrastructure will be needed in the United States to keep production rates rising and prices low.