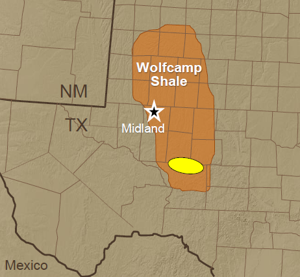 The increased output from the Wolfcamp has helped make the Permian the top producing oil field in the United States and a focus for billions of dollars of investments.

Oil production from the Wolfcamp as of September reahed 1 million barrels a day and natural gas 4 billion cubic feet a day,, according to a new Energy Department.

The Wolfcamp play is one of a few that make up oil and gas-rich zones deep underneath West Texas and form the the Permian region and its sub-basins the Delaware Basin, Central Basin Platform, and Midland Basin.

That production is around one-third of the Permian's estimated Sept. production of 3.5 million barrels a day of crude oil and 11.6 trillion cubic feet of natural gas.

The Energy Department expects the Wolfcamp to continue to drive production growth in the Permian, although though it notes that a lack of pipeline capacity region will likely slow it through 2019.

Other major plays within the Permian include the Spraberry and Bonespring.