But a small group of activists in the Coastal Bend region – known as Portland Citizens United (PCU) – is trying to stop this economic progress, even if it means misleading the public with false claims and dubious imagery on social media. PCU is also coordinating with big environmental groups that are headquartered outside of Texas. The litigation director for at least one of those groups – based in the San Francisco Bay area – has approved hundreds of thousands of dollars for lawyers to contest the project and potentially tie it up in court.

Gulf Coast Growth Ventures, a joint venture of ExxonMobil and SABIC, is planning to build the cracker near the city of Portland in San Patricio County. According to GCGV’s website, the project would generate more than $50 billion in economic gains for the state during the first six years. In addition to thousands of jobs during construction, the project would also support more than 600 permanent jobs with an average annual salary of about $90,000. 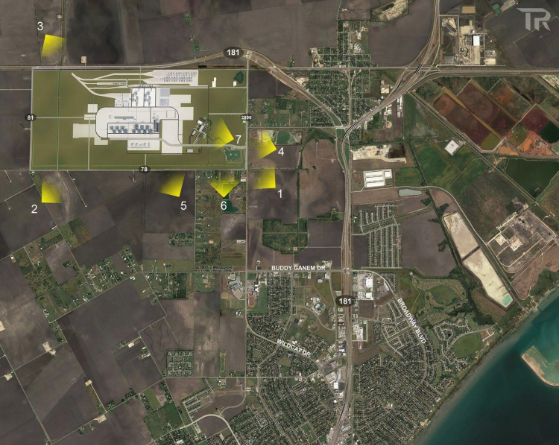 The GCGV project is part of a broader trend in the region. Thanks to abundant supplies of natural gas, unlocked by the shale revolution, chemical manufacturers – who use gas as a feedstock in their operations – are investing billions of dollars in Texas and the rest of the Gulf Coast.

According to the American Chemistry Council, the chemical industry has announced 325 new projects in the United States as a result of shale gas, which will support 468,000 direct and indirect jobs by 2025.

Last year, PCU invited the Environmental Integrity Project and the Sierra Club to an event in Portland, Tex., to raise doubts about the safety and environmental impacts of the GCGV project. Prior to the hearing, Texans for Natural Gas debunked many of the claims they commonly make about petrochemical facilities – claims that the groups nonetheless repeated at the event.

But PCU has a much longer history of deceiving the public.

In December 2016, PCU claimed to have worked with a Pennsylvania journalist to develop a critical report on GCGV’s proposed facility. PCU published what it called an “independent report concerning ethane cracker specifics” on its blog, noting:

"We had an independent third-party energy reporter, Reid Frazier from Allegheny Front, do some digging and the following report is everything you ever wanted to know about a kind of petrochemical facility you’ve probably never heard of.” (emphasis added)

Indeed, PCU’s “independent report” appears to be largely copied and pasted from a report that Mr. Frazier published for Allegheny Front in March 2012, which was meant to inform audiences in Pennsylvania about a different facility that Shell proposed.

Even PCU’s line referencing Mr. Frazier looks to have been copied from the 2012 report, with a few words changed to make it appear as if PCU requested it, rather than Allegheny Front. 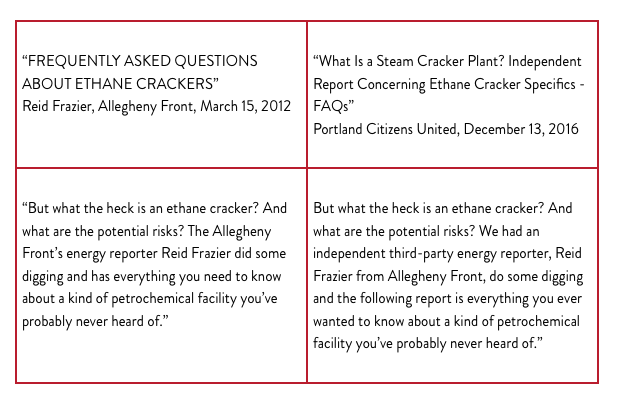 On March 28, 2018, PCU updated its Facebook cover photo to a picture of a pelican covered in oil, which the group links to effluent from the proposed ethane cracker. The Coastal Bend is an important habitat for many migratory birds, including the endangered Whooping Crane, and each year the region hosts a festival to celebrate the birds’ migration to places like the Aransas National Wildlife Refuge.

Two days before updating its cover photo, PCU made a Facebook post under the heading: “EXXON AND THE SAUDIS PUT GROWING WHOOPING CRANE POPULATION AT RISK.” PCU also published a blog post with the same headline. 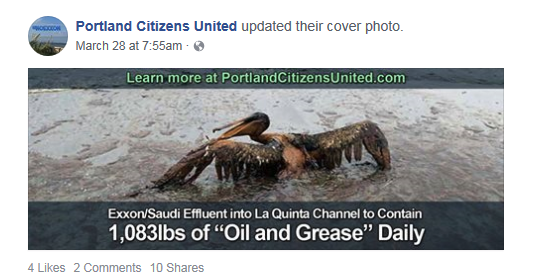 But the oil in PCU’s cover photo is unrelated to any operations from ExxonMobil or SABIC. In fact, it isn’t even from the state of Texas.

The photo was taken in the aftermath of the 2010 Deepwater Horizon incident in the Gulf of Mexico, part of a group of photos cataloging impacts to the coast of Louisiana.

This isn’t the first time an environmental group has used dubious imagery to attack the energy industry. In 2011, Penn Environment tried to capitalize on flooding in Pennsylvania with an image of a submerged drilling rig. The group posted it on Facebook and tweeted it with the caption, “Here’s more evidence Marcellus Shale drilling pads should NOT be allowed in floodplains.”

But as the Harrisburg Patriot-News uncovered, the rig wasn’t from the Marcellus Shale, and it “wasn’t even in the United States.” Penn Environment had used a photo of a sunken rig in Pakistan to attack American energy development. Six months later, the group used another photo from a foreign country to accuse the energy industry of polluting a river in Pennsylvania. The photo actually showed sewage from a treatment plant, and was published on ShutterShock by a photographer from South Africa.

On April 15, 2018, PCU took down the oil-soaked bird and replaced its cover photo. But the language on the new photo is equally deceptive.

The new header declares: “You SHOULD have been notified that Exxon/Saudi Project WILL discharge industrial stormwater into Copano/Mission/Port Bays.” In a blog post published the same day, PCU claimed the companies did not provide notice of its discharge application:

“TCEQ Rules require that EXXON publish the Notice in a newspaper regularly published or circulated within each county where the proposed facility or discharge is located and in each county affected by the discharge.  Because the industrial stormwater flows into Copano/Mission/Port Bays, Aransas County is affected by the discharge.  We also believe Refugio County is affected because of where it enters the bay systems.  Exxon did not publish Notice in either county.  Perhaps they didn’t think you would be affected.  But that is not their decision to make.  It is yours, and it is your right to receive notice.” (emphasis added)

Except GCGV did provide notice in the Corpus Christi Caller-Times, the region’s largest newspaper, which covers Aransas and Refugio counties. Following guidelines from the Texas Commission on Environmental Quality (TCEQ), the full Notice of Public Meeting was published in the newspaper on November 10, 2017 – a full month before the December 11, 2017, public meeting on the draft permit in the city of Gregory. The TCEQ also published the notice on its website on November 8, 2017.

Despite PCU’s claim that Aransas and Refugio counties were left in the dark, information published on the group’s own website proves otherwise.

On April 8, 2018, PCU published TCEQ’s response to comments that were filed at or before the December 11, 2017, public meeting. The response lists comments from an Aransas County judge and a business owner whose company is headquartered in Aransas County, among dozens of other individuals.

On January 17, 2018, the Sierra Club directed people to PCU’s website to submit public comments on two air permits for which GCGV had applied. The Sierra Club also expressed hope that it could “get standing for a contested case hearing,” and that it had already “retained council [sic] out of Austin.”

Pat Gallagher, the director of the Sierra Club’s Environmental Law Program, approved $250,000 for the litigation, according to the meeting minutes. According to his LinkedIn profile, Gallagher lives in the San Francisco Bay area of northern California, where the Sierra Club is headquartered.

The following month, the GCGV project was raised again. In approving the prior month’s minutes, the group clarified that the “$250,000 might need to be spent in opposing the Exxon plant in Portland. This amount has not been authorized.”

The Sierra Club appears to be taking on greater significance among the individuals opposing the GCGV project, particularly behind the scenes.

The minutes for the group’s February 21, 2018, meeting described how “the Sierra Club would help the Portland group with details,” but said any assistance “will be handed off to the Portland group to be the main player.” In a recent post on PCU’s Facebook page, commenters tagged several Sierra Club staffers in Texas.

The Gulf Coast Growth Ventures project in San Patricio County represents a game changer for the local economy. Unfortunately, in case after case, Portland Citizens United has misled people about the proposed facility – from falsely claiming to have “hired” a reporter to pushing out dubious photos on social media.

Thousands of jobs and billions of dollars in economic impact are on the line. Residents of the Coastal Bend deserve better than what PCU has told them.