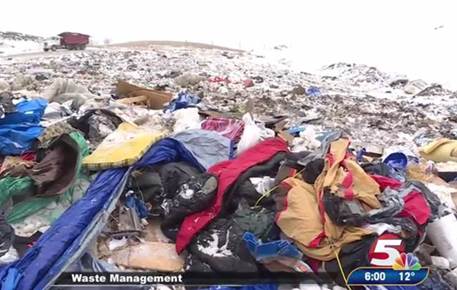 Dakota Access pipeline protesters left behind massive amounts of garbage when they left their camp site, and now sanitation crews are working frantically to prevent an environmental crisis.

According to a story by KFYR in North Dakota, cleanup crews have already hauled away 23 loads of trash from the Oceti Sakowin Camp, but they estimate it will take 250 truckloads to fully clear the camp.

Compounding the problem is that the protesters’ garbage has frozen in the brutal North Dakota winter, and in a month the trash could become toxic.

The public health problems left in the wake of the North Dakota protests raise additional concerns about camps currently being created in West Texas, where a handful of protesters are struggling to replicate what they did with Dakota Access. Activists are targeting the Trans-Pecos Pipeline, which is estimated to generate more than $7 million per year in new tax revenue for Pecos, Brewster, and Presidio Counties.

Several of the activists in West Texas have actually traveled from North Dakota to protest, though it is unclear if they were previously in the Oceti Sakowin Camp that has created such concern. At least one of the activists who traveled from North Dakota, who was recently arrested in West Texas for locking herself to a bulldozer, was involved in the protests against Dakota Access.

Back in December, protesters claimed as many as 300 activists would join them within a month. Only 15 activists are currently participating during the week, according to the Houston Chronicle.

A Texans for Natural Gas petition in support of the Trans-Pecos Pipeline has garnered over 500 signatures to date.