“Although we experienced a decrease in jobs and economic impact in 2015 and 2016, we continue to see that the oil and gas industry is essential to the livelihood of South Texas. With more than 100,000 jobs and $55 billion in economic output last year, the results of the UTSA study further illustrates the importance of the oil and gas industry to South Texans. The industry in South Texas brought much needed infrastructure along with a sustainable source of income to the area. Sustained growth will further benefit the region through an increased tax base along with increased job and educational opportunities.”

The study, which was commissioned by STEER, analyzed 21 counties, 15 of which are directly located within the Eagle Ford Shale and six that are adjacent. 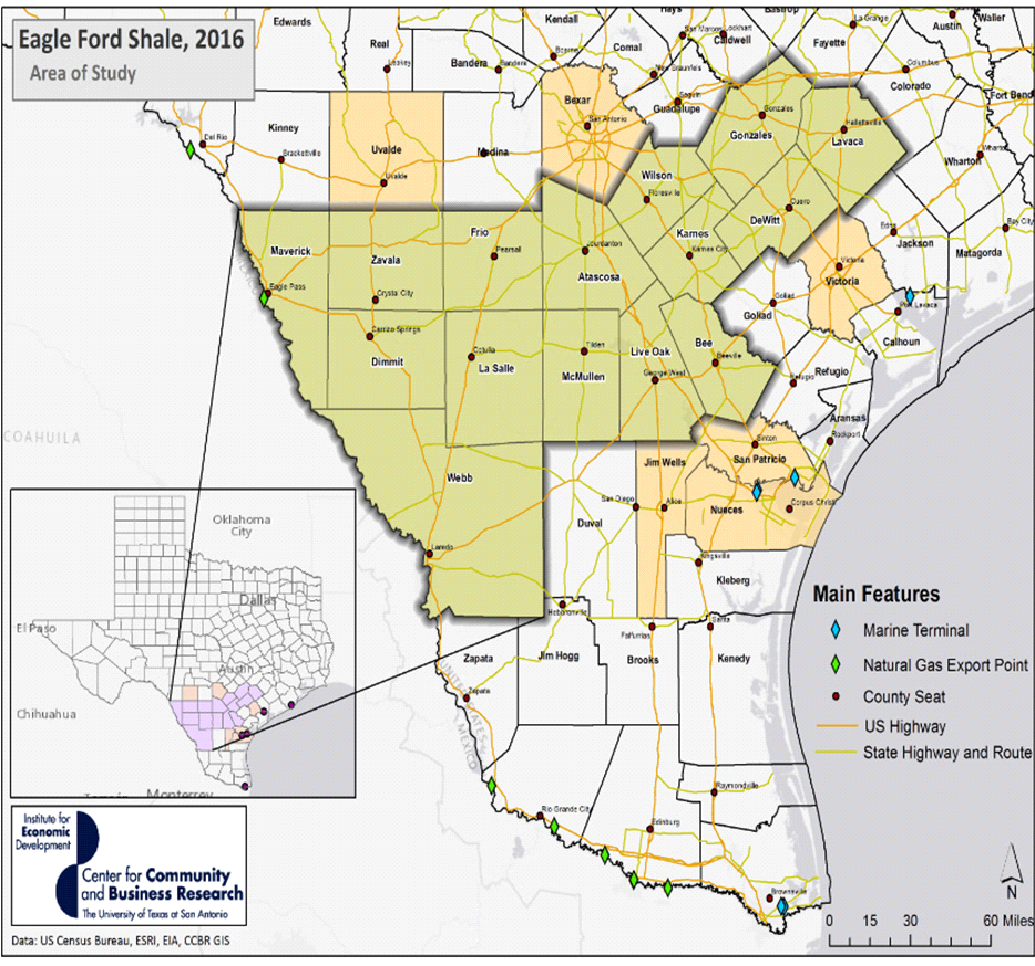 “To put events into perspective, the overall economic impact in the 20-county area (Lavaca County had not yet been included) when the shale activity had begun to generate significant buzz in 2011 was $25 billion, supporting nearly 50,000 jobs. The economic impact and job numbers for 2016 exceed 2011 levels. Tax revenues for counties in the Eagle Ford also continue to exceed levels prior to the influx of oil and gas production.”

The study also found that additional industries representing everything from support services for the oil and gas industry to melon farming and tortilla manufacturing have experienced growth as a result of the development.  It also supplies a list of industries that weren’t present in the region in 2009, prior to oil and gas development, such as local wineries and various manufacturers.

In fact when looking at all industries in just the 15-county region,  the study cites Texas Workforce Commission statistics demonstrating that between third quarter 2009 to 2016, there were 29,564 more jobs or an 18.7 percent increase in employment. During the same time period, the entire state of Texas increased by only 17.3 percent.

Additionally, the study mentioned trends that will continue to push higher production in the region, noting that natural gas exports to Mexico from the United States reached a record-breaking one trillion cubic feet (Tcf) in 2015 and that the United States is well on its way to becoming the largest exporter of Liquefied Natural Gas (LNG) in the world. Port Corpus Christi executive director, John LaRue said in the press release,

“South Texas has become an export leader in the energy products realm. We are committed to continued sustainable growth.”

Notably, the study discussed that U.S. natural gas production hit a record 28 Tcf in 2016, and as Dr. Thomas Tunstall, senior research director for CCBR and the team lead for the research, explained:

“Our report indicates that the decrease in economic impact bottomed out in 2016 and appears to have turned the corner. Oil prices in 2017 are higher and rig counts have risen from their lows last year.”

That couldn’t be more accurate, as recent Energy Information Administration (EIA) data shows the Eagle Ford continues to contribute to America’s ever growing production with an expected 1.4 million barrels of oil and 6 billion cubic feet (Bcf) of natural gas expected to come out of the play daily in July.